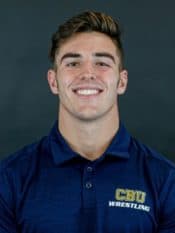 The top two leading scorers for the California Baptist University wrestling team are from Alaska.

Glennallen’s Caden Gerlach and Anchorage’s Evan Bockman have combined to score 47 of the team’s 123 points in seven dual meets against D1 competition.

Gerlach, a redshirt freshman, has really emerged as the team’s most successful wrestler.

The 184-pounder leads the team with six wins, three pins and 31 points.

Nine of his 12 career victories have come on pins. This year he’s a centerpiece of the starting lineup, posting a team-best 6-1 record.

Bockman, a redshirt sophomore, has racked up a 4-3 record in his first year of competition.

He did not complete last year after redshirting the season before that.

Bockman, of Grace Christian High fame, has one pin and one major decision on his way to scoring 16 points on the season.