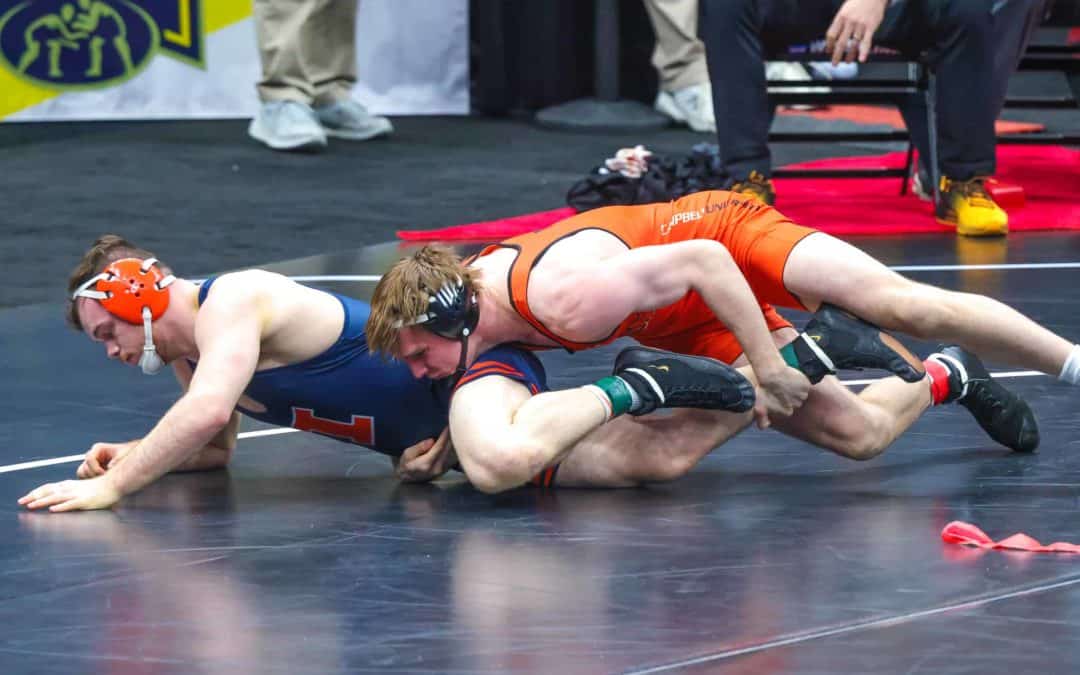 Palmer’s Caleb Hopkins picked up a win and got a shoutout from ESPN, making his first day at the NCAA Championships a big success.

The Campbell University sophomore went 1-1 at 184 pounds, with his victory coming in the first round with a 7-6 decision over the Big Ten’s Zach Braunagel of Illinois.

Hopkins is the first Alaskan to win a match at the NCAAs since Chugiak’s Cayle Byers of Oklahoma State did it in 2012.

Hopkins, of Colony High fame, is the No. 14 seed out of 32 qualifiers in his weight class.

In the second round, he squared off against No. 3 seed Lou Deprez of Binghamton. Deprez led 2-1 when ESPN2 coverage picked up the match with 55 seconds to go.

Hopkins is the only Alaskan in the tournament and got a shoutout from the TV commentator.

“From a commercial fishing family in Palmer, Alaska,” he said.

Deprez hung on to beat Hopkins 4-1, scoring one point on a late escape and another point on riding time. This was the 96th career win for Deprez.

It was a tough match for Hopkins, who had Deprez on his back almost the entire time.

Hopkins, the Southern Conference champion, did well to defend from the bottom position as Deprez never got him to his back.

Earlier in the day, the Alaskan had another tight match and needed an escape with 90 seconds left in the third period to beat Braunagel of the Big Ten.

It doesn’t matter who you are or where you’re from. This cold-blooded Alaskan is coming for you! pic.twitter.com/rQC7MqrUq8

Hopkins used two terrific takedowns early to build a 4-1 advantage, but later found himself down 6-5.

The 6-foot-1 Hopkins used his strength and length to twice escape the grip of his opponent to put the state of Alaska on the board.

Hopkins will get another shot in Friday’s consolation bracket. He will take on Sam Colbray of Iowa State.

In 2019, Kotzebue’s Joshua Roetmann of Navy qualified for the NCAAs but went 0-2.

In 2012, Anchorage’s Nathan Hoffer of Arizona State was a NCAA qualifier but went 0-2.

That same year, Byers went 5-1 at 197 and placed third – the highest finish for an Alaskan in the NCAAs.

Other podium finishes in Alaska history include Kodiak’s Scott Norton placing fourth for Oregon in 1997 and Palmer’s Gabe McMahan placing sixth for Iowa in 2001.