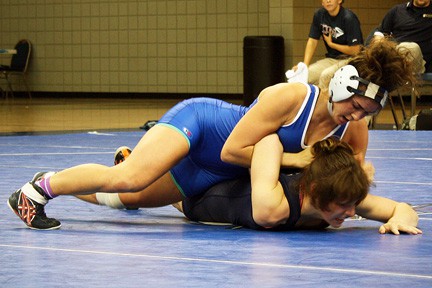 Michaela Hutchison of Soldotna put women’s wrestling on the map in 2006 when she became the first girl in the country to win a high school state title against boys.

But she didn’t stop there.

Hutchison, of Skyview High fame, went on to wrestle for Oklahoma City University, where she was a four-time All-American and three-time national champion for the women’s team and an occasional fill-in for the men’s team.

In 2009, she became the first woman in school history to win a match for the men’s team against, beating Bacone College’s Tyler Kinslow 13-4 in a major decision.

Hutchison finished her college career with 71 pins and a sparkling 142-21 record, including a 1-3 mark on the men’s team.

Her 142 career wins at the college level is believed to be the most for an Alaska wrestler – male or female.

She was champion of the 2015 U.S. Senior Nationals and became the first Alaska woman to qualify twice for the Olympic Trials in 2012 and 2016.

Hutchison gave women’s wrestling credibility after she made history in 2006 with a 1-0 win over Colony’s Aaron Boss in the 103-pound state final.

The match was scoreless before Hutchison scored an escape with 16 seconds left, cementing her place in history. Other girls had made the state final, but she was the first champion.

The victory capped a 45-4 sophomore season for Hutchison, who earned 33 of her wins with pins. She also finished second, fourth and fifth at the state meet.