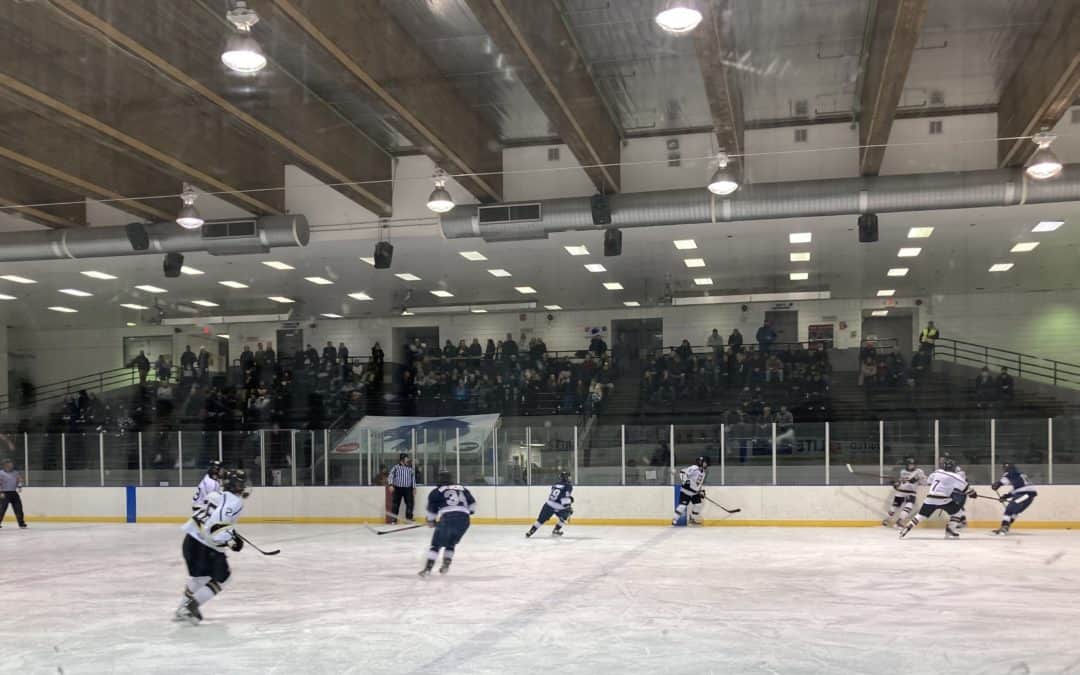 As the Sullivan continued as a homeless shelter for the state’s largest city, rows of large fencing blocked a big section of the parking area from the Boeke side. While a bit jarring at first glance, the imagery only added to the current oddity of the Cook Inlet Conference hockey season and arguably the local sports scene in general.

South senior Gavin Fox scored a natural hat trick in a 3-minute, 45-second span and finished with five goals Tuesday, pacing the Wolverines to an 11-0 victory over Eagle River. The league leaders outshout the Wolves 41-7 and improved to 6-0-0 in CIC play.

While the ongoing pandemic and numerous other human elements have played a factor, the show inside the old Boeke barn didn’t offer much in the way of juice or enthusiasm. Generously, the stands were about half full of fans and the gathering included few students and no cheerleaders from either school despite one more day of school before Thanksgiving.

“Actually, I kind of liked it because it allowed me to focus more,” Fox said moments after coming off the ice. “Sometimes, with what the students are doing and the cheerleaders, it can be distracting.

“Which isn’t always a bad thing.”

Fox said he didn’t hear anything from students during the day as to why they didn’t show up to watch.

“Kids will come to most of the games if they can, if they don’t have stuff going on,” Fox said.

Before anything else, we must acknowledge the pandemic. It’s silly to think safety concerns aren’t keeping some people away from public events

But there’s much more to ponder.

When West and Chugiak collide at Boeke on Wednesday in the final game before the holiday break officially starts, the Eagles will play only their second CIC game and first in three weeks. It will be just the Mustangs’ fourth league matchup.

In contrast, Bartlett played the ninth of its 14 league games Tuesday – a 20-1 loss to the Cougars. The Golden Bears are only scheduled to play two league games in December.

Former Service High and UAA skater Jason White is an assistant principal at Goldenview Middle and in his fourth season as the Anchorage School District’s athletic director for CIC hockey. He took some of the blame for the game schedule quirkiness to this point, but also faced some obstacles and unexpected moving parts.

White said he initially had a 2021-22 schedule drafted last spring. Last year, CIC teams only played the 14-game league schedule because of the pandemic. All other games and the 2021 First National Cup state tournament were canceled. He learned late that Bartlett and East would each put a team on the ice after a season as a combined squad. Changes were also needed when Fairbanks said its school teams were folding before minds were changed. League teams are now also participating in non-conference games and tournaments around the state.

“I tried some different things and it bit me,” White said. 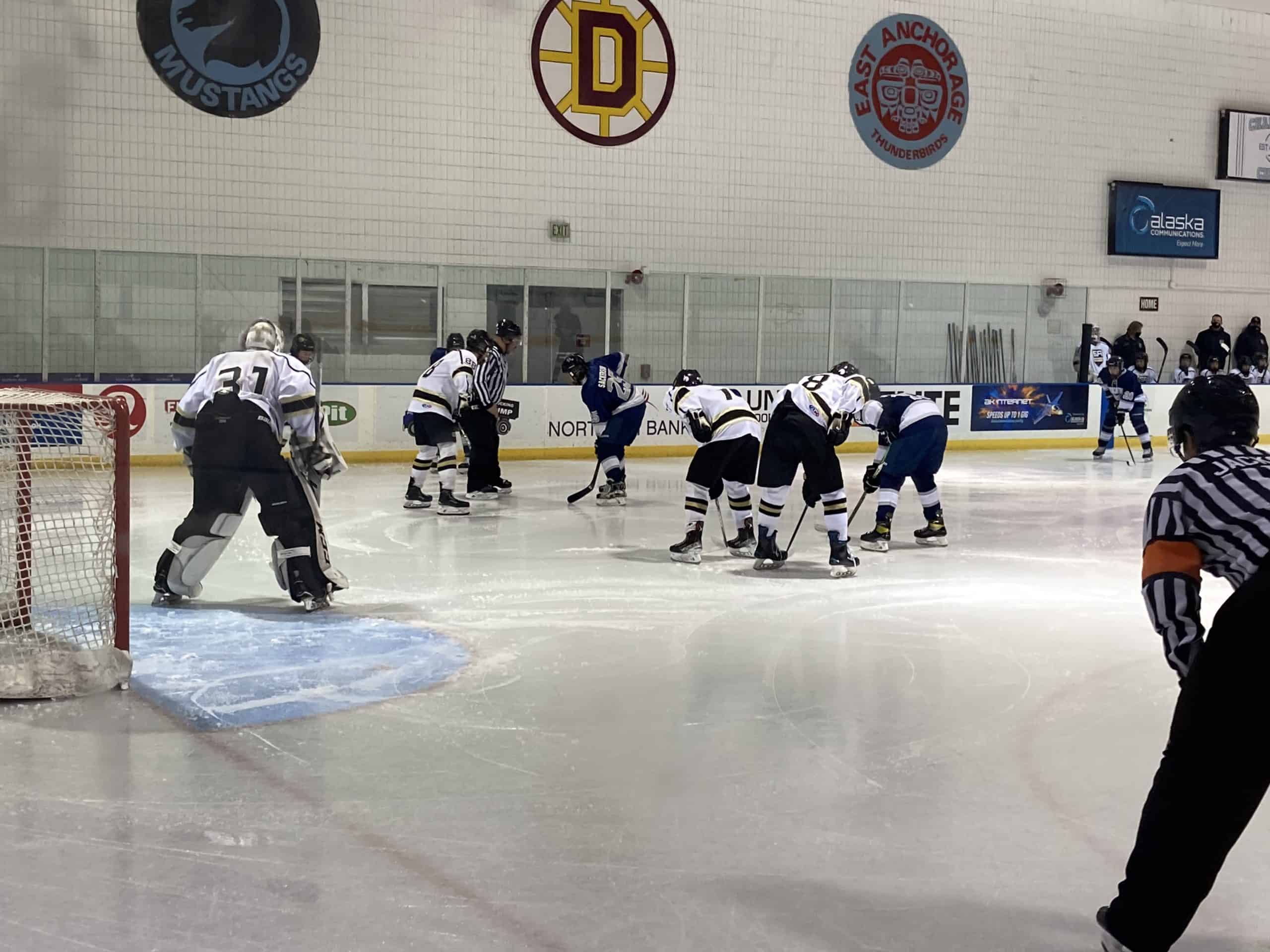 But there’s more to confound and confuse. East forfeited two games this week because some students left for Outside comp tournaments before the ASAA’s dual-participation break begins Thursday. Bartlett played Tuesday without star senior Bradley Beals for the same reason, according to off-ice officials.

The Thunderbirds sport a 2-3-0 record, which includes the fresh forfeits and one from a few weeks back when players hadn’t met the requirement of 10 practices. So yeah, unbeaten in games actually played.

“It’s been frustrating to work around,” said Ronan Klancher, East’s first-year coach. “Some people filled out paperwork a few days late, and now some players are out on trips or visiting family.

“But I am really happy with the way the team has played.”

ASAA’s dual participation has been around for several decades. Generally, it allows for students to play on comp/travel teams only in allotted time periods around Thanksgiving and Christmas. Wagner said the rule came to be because school teams would often add kids who maybe played Outside for much of the regular season to the roster just in time for conference- and state-tournament play.

“The schools kind of realized this approach wasn’t right, so we made some changes,” Wagner said. “The whole process you see now has probably changed five times in the last 20 years.

“It’s an evolving thing. Could it change for next year? Absolutely.”

Part of the issue is the sheer growth of comp and junior hockey around the country. Opportunities seem endless, White said. Large tournaments offering maximum exposure to college and other scouts don’t only happen around the holidays. Some players and families are apt to believe getting out to those tournaments are more important to them than anything happening locally.

White said a meeting that included ASAA, representatives from the Team Alaska Tier I comp program, other organizations, dean of high school coaches Dennis Sorenson of Dimond, Fairbanks’ Wayne Sawchuk and himself recently took place. The topic? Figuring out the best way forward for serious comp players to be active participants in the high school season.

“We’re definitely not trying to be combative,” said Wagner. “We’re simply trying to keep high school alive because for a lot of kids that’s all they do.

White said his one year playing at Service before leaving to play outside was the most fun he had in the sport.

“Plus, every professional (player) I know also played high school hockey,” he said. “It’s what you truly remember.”

Fox summed up the reason he played Tuesday for South and will for the entirety of the season.

“I’ve already had those opportunities (Outside), and I said no (this time),” he said

“I want to finish school here and be here for my senior (year). It’s all about that pride.”