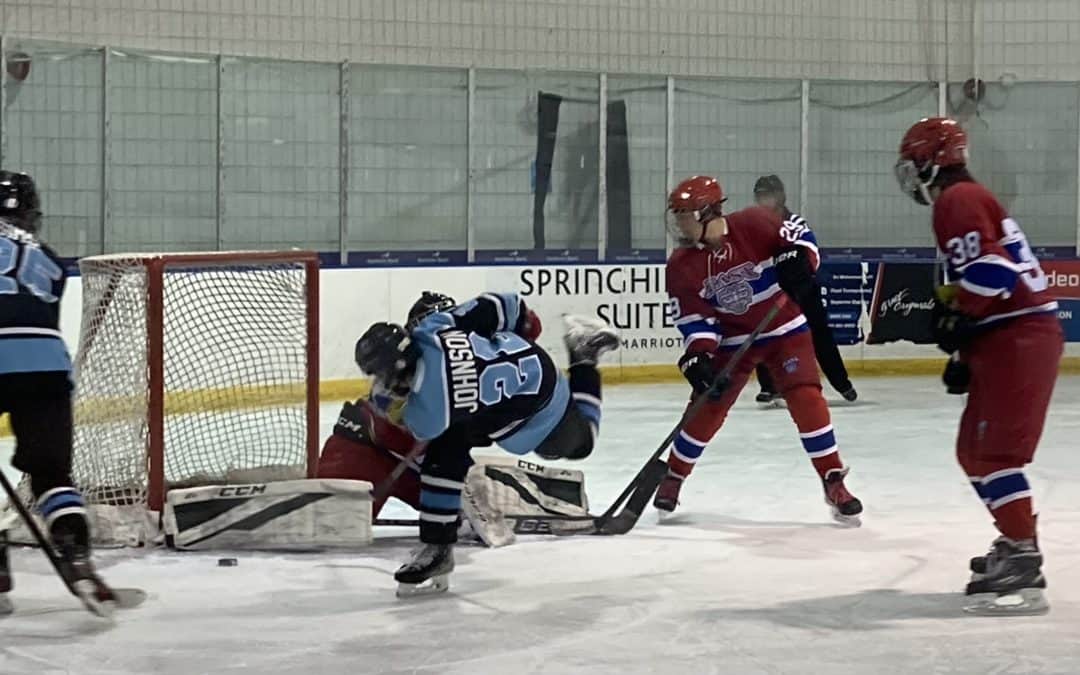 While the kind of awe-inspiring amazement worthy of a major motion picture continued unfolding Wednesday night, Aidan McCormick grew tired of his opponent’s would-be movie magic and did what had to be done.

“I saw the puck sitting there and knew I had to put it in the net,” the Chugiak senior captain said. “I was done with this game, I wanted to get off the ice.”

McCormick slid in a rebound at the 2-minute, 15-second mark of overtime for his fourth Cook Inlet Conference goal, and Chugiak scored the wildest of 3-2 wins over thoroughly outnumbered East at Ben Boeke Arena. The Mustangs’ 16 skaters strong improved to 6-5-0 in league play and peppered Thunderbirds senior goaltender Bryce Erickson with a ridiculous 64 shots on goal in the process. 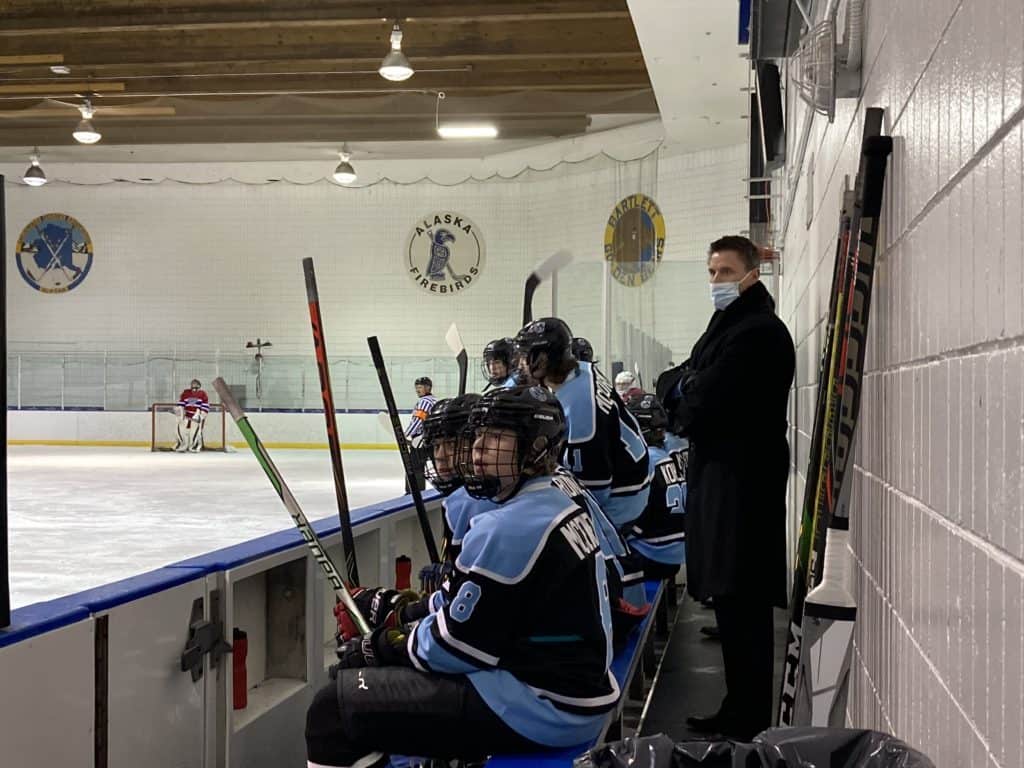 Chugiak obtained the victory. But East’s effort earned mad props from all in attendance.

“(East) was committed, and man, they never gave up,” McCormick said. “It’s a group of players with a lot of determination.”

The Thunderbirds won two of its first three CIC games but also forfeited three of the first five when Outside travel and other issues resulted in not enough bodies to play. The forfeit losses included East’s Nov. 23 meeting with Chugiak. But a season removed from playing as a combined CIC squad with Bartlett, first-year coach Ronan Klancher’s team played the kind of memorable game Wednesday that’s remembered at future class reunions.

“Obviously, we’re not going to outshoot anybody,” said Nicholson, a senior who notched his team-leading third and fourth goals. “We have to come and play a system that keeps (opponents) outside while they’re shooting. 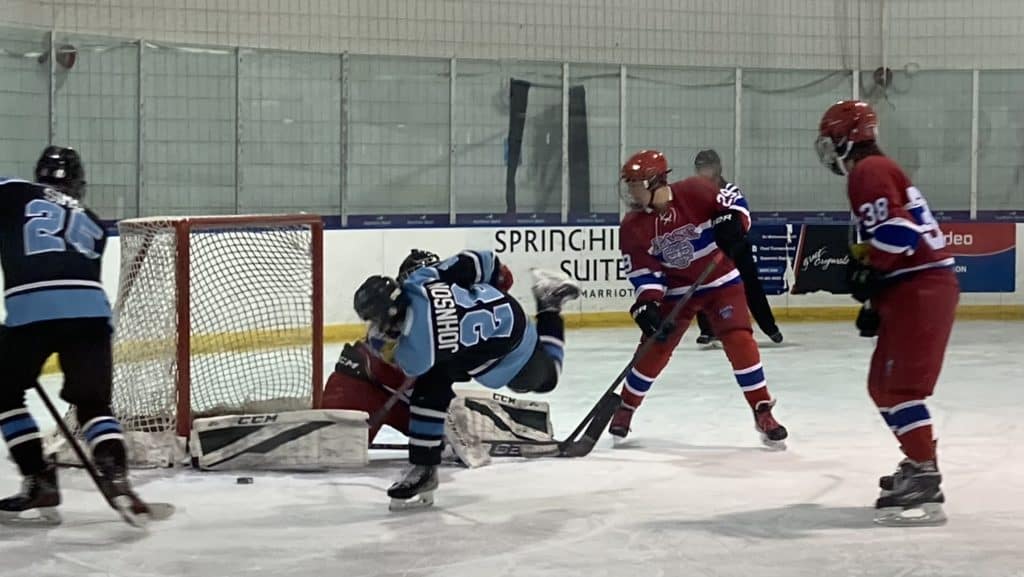 Erickson did credit his teammates for making his workload a little easier. But the big goalie kept moving throughout, coming out to challenge and also staying deep in his net. Erickson was especially strong with multiple leg-pad saves.

He also helped kick off the scoring at 11:13 of the opening period. East never hesitated to ice the puck, which is what Erickson figured he was doing when he connected with Nicholson at the far blue line for a breakaway score.

“I kind of wanted a break so I was icing the puck,” Erickson said. “But it was on edge. I happened to whiff, it went right to him and he went down and scored.

“Not the greatest play, but it worked.”

Nicholson staked East to a 2-0 lead at 14:18. Ubiera earned his first CIC point with an assist.

The Thunderbirds (2-8-0) admirably clogged up as many areas on the ice as they could. To its credit, Chugiak never slowed down. Junior Ajay Johnson finally got one past Erickson near the left post at 12:04 of the second on the Mustangs’ 32nd shot on goal.

Sophomore Fisher Sims tied the game with his team-leading sixth goal at 8:45 of the third. Positioned near the goal line on the left, Sims recovered his own rebound and lifted a shot high above Erickson into the upper-right corner.

Chugiak fired 30 shots at Erickson in the final period. McCormick’s game-winner came seconds after a key defensive breakup from East and a highlight-reel shot block from Glover.

“It was tough,” McCormick said. “Honestly, I don’t think we were playing badly.

“We got a little down. But all you can do is focus on what can be controlled and stay in the moment.”

The final moment belonged to McCormick and Mustangs.

Eventually, and despite East’s superlative intentions. 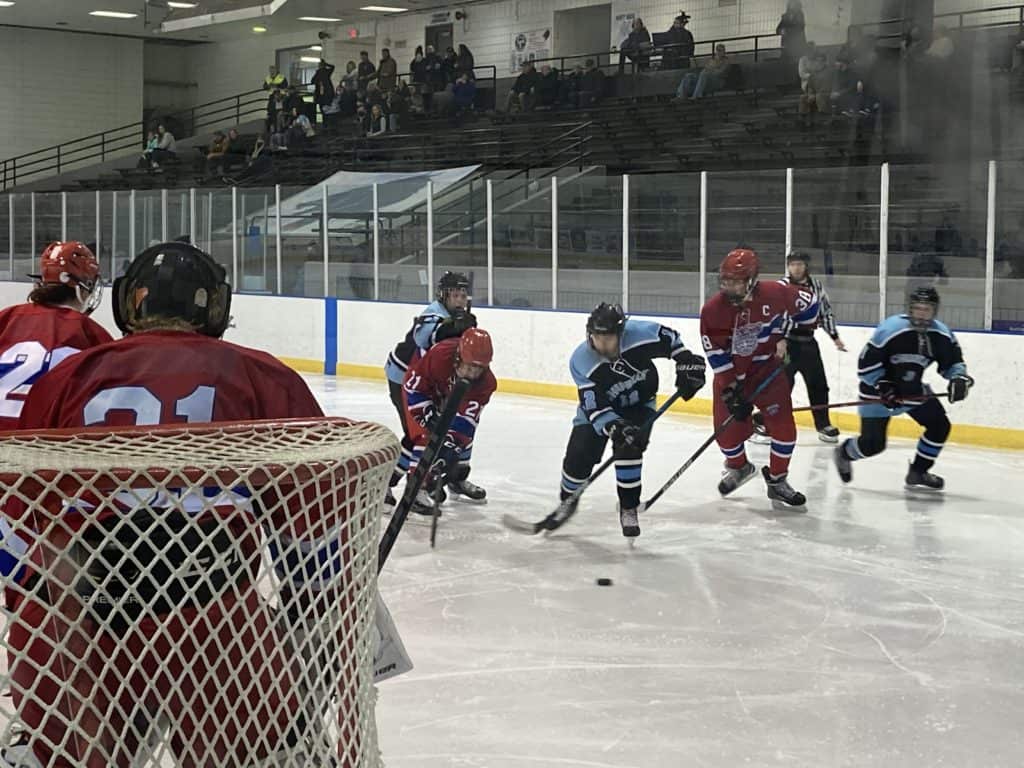 THE WOLVES MUST WONDER

Last spring, Eagle River went on quite the heater en route to finishing third in the CIC tournament. The Wolves surprised West early on with a 2-1 overtime victory, fell to Dimond in a double-overtime semifinal thriller and blitzed Service 5-0 in the third-place game.

Eagle River carries a 3-8-0 league mark into its next game Jan. 22 against Dimond. The current Wolves are without a quartet who accounted for 56-percent of the goals scored last regular season – defenseman Gavin McDonald and forwards Aaron James and Tay Kurpius were named to the 2021 all-conference squad.

McDonald registered an assist Friday for the Des Moines (Iowa) Buccaneers AAA team in a 2-0 victory. Senior brothers Aaron and Jacob James have combined for seven goals and 11 assists in seven games played for West. Meanwhile, Kurpius recently made his CIC season debut in a Dimond sweater. The senior scored two goals and three assists in his first two league games with the Lynx.

A trio of teams were scheduled to embark on an intriguing weekend road trip. Reports early Thursday suggest the Anchorage School District canceled the travel because of poor road conditions.

The 2022 CIC Tournament starts Jan. 31 when the eighth seed faces the fifth and the seventh takes on the sixth. The third and fourth seeds play the opening-round winners on Feb. 1 while the league’s top two seeds await in the Feb. 3 semifinals.

The tournament third- and fifth-place games are scheduled for Feb. 4 and the championship will be decided Feb. 5 with a 6:30 p.m. start at Boeke. Final seedings will be determined in these next three weeks.