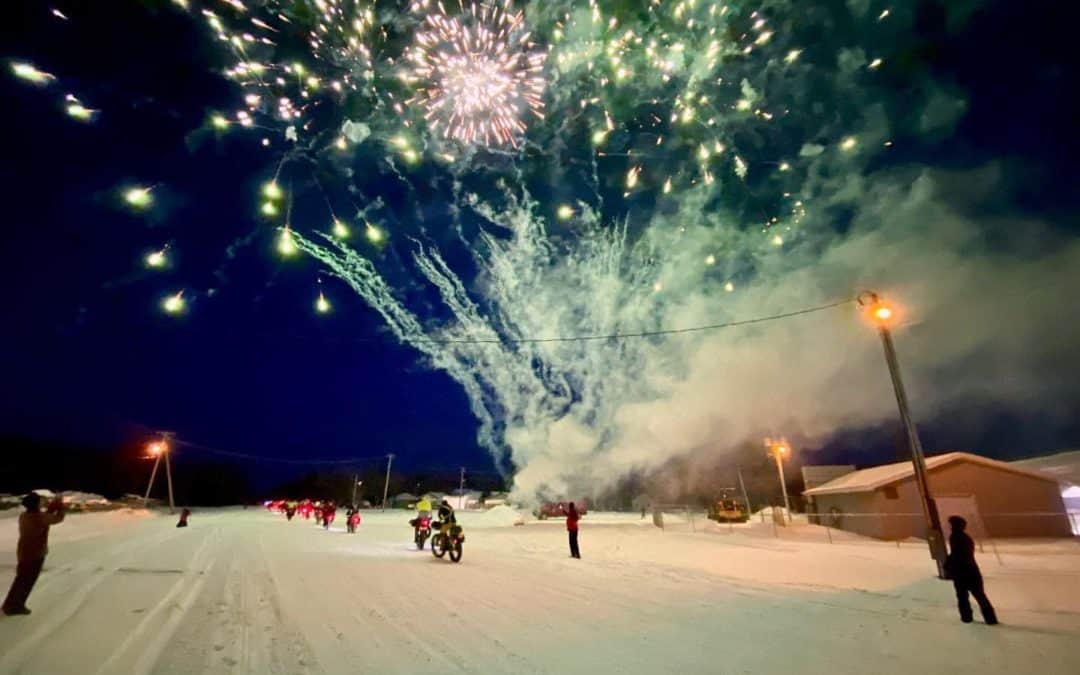 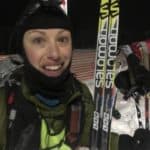 Shalane Frost figured she was likely to break the women’s skiing record at the Arrowhead 135 in northern Minnesota.

However, claiming the overall record — by skiing faster than any man had since the event started in 2005 — seemed like a stretch.

“I was confident I could get the women’s record. It was 35 hours,” Frost said from International Falls, Minn. “I didn’t actually think that I would have a shot at the men’s record. That’s fast, a 6.6 miles per hour average.”

But everything fell into place for Frost on the Arrowhead State Snowmobile Trail from International Falls to Tower, where many runners, bikers and skiers prioritize avoiding frostbite and simply finishing over pursuing records.

Coming from Fairbanks, the 33-year-old is used to frigid conditions — she even designed and markets a “Nose Hat” to protect that appendage — and past Arrowhead races have featured temperatures as cold as 40-below Fahrenheit.

This year, though, Frost benefitted from the “super warm” conditions: single-digit temperatures at the 7 a.m. start that climbed to about 25 during the day, with a high sun angle that felt to her like March in Alaska. The unseasonably nice weather provided good glide for her lightweight Salomon skate skis and the wide, firm trail allowed for easy passing. Her near-daily training and supreme fitness set her up for a record-chasing day on a trail she called a “superhighway.” 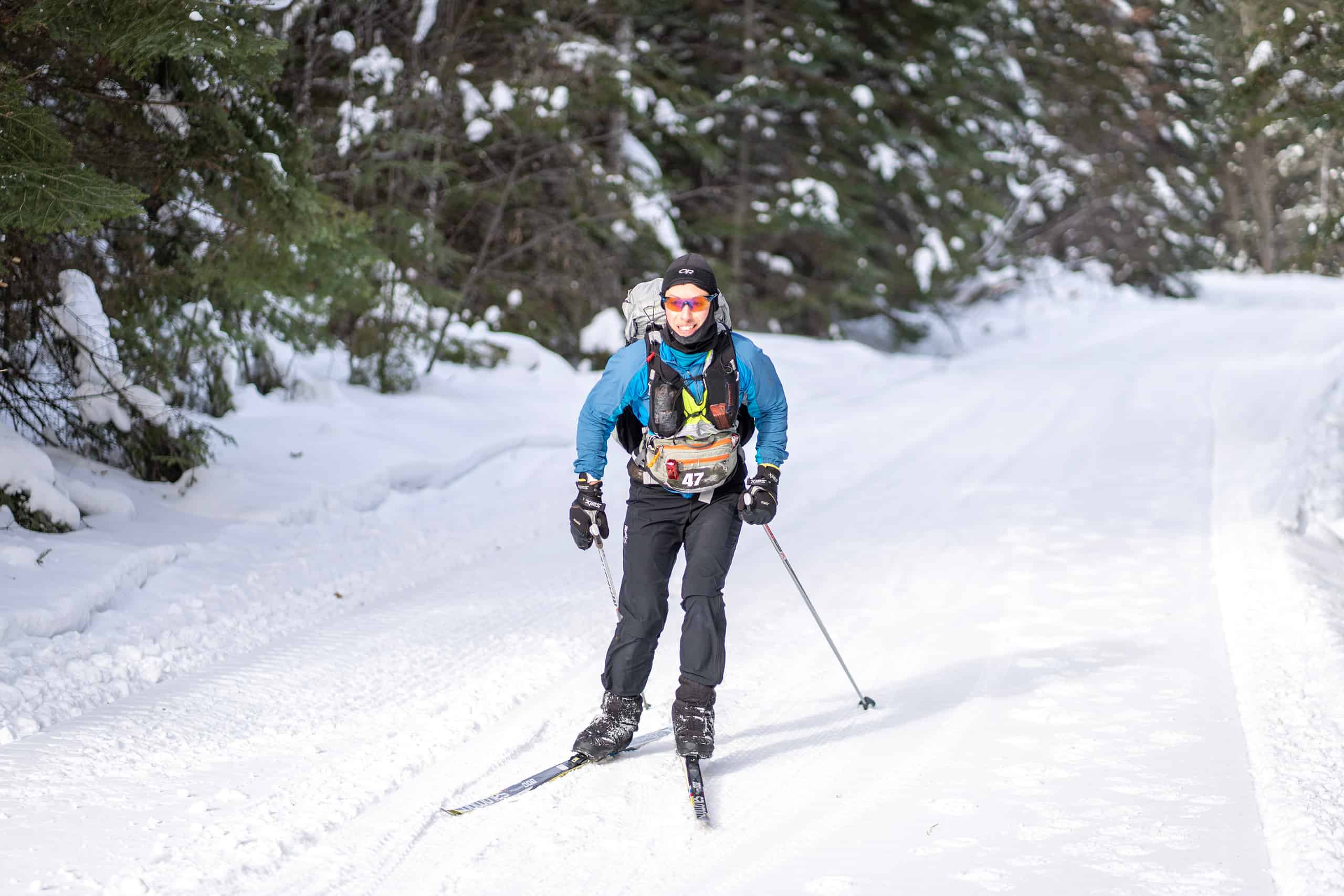 Shalane Frost of Fairbanks broke the overall skiing record at the Arrowhead 135. Photo by Swift Photography

“It was like 12 feet wide in most places. You could have two people (skate-skiing) abreast,” she said.

That all sounds great, but was also an adjustment for Frost.

“My strength is the cold (weather) and the narrow (trails),” said Frost, who hails originally from Vancouver Island in British Columbia, Canada and didn’t learn to Nordic ski until moving to Fairbanks 11 years ago.

The overall record holder, Dan Campbell of Montana, also participated this year and while he couldn’t keep up with Frost, he did pass along his race splits from his record-setting effort of 20 hours, 57 minutes in 2020.

“At the midpoint (Mile 72) I realized I was basically right on (the record splits),” Frost said. “I was skiing slower. I was just moving through the checkpoints faster.”

After a short stop at the final checkpoint 24 miles from the finish, Frost had an 18-minute buffer on Campbell’s mark as she set off a little after midnight. She reached the finish at 3:43 a.m. after 20 hours and 41 minutes on the trail, knocking 16 minutes off Campbell’s mark and an astounding 14+ hours off the previous women’s record.

Not the women’s record, she’ll have skied the Arrowhead Ultra an hour faster than anyone else, ever.

“It was flat. It was just a drag race to the finish,” Frost said. “Yeah, that hurt.”

Alaskans have occasionally raced their bikes at Arrowhead, and Frost gleaned some info from Jay Cable. Fellow Fairbanks friends Jeff Oatley, Heather Best and Kevin Breitenbach are all past bike champions.

One of Frost’s biggest challenges was hauling a backpack that weighed about 25 pounds. It held required gear including a sleeping bag rated for 20-below, bivy sack, stove and Thermarest pad — none of which she used. The gear weighed 2-3 times more than what she typically carries while racing the White Mountains 100 north of Fairbanks, an event she’s won five times and also holds the women’s record at.

While race day went smoothly, with a short wrong turn being the only snafu, Frost’s trip to Minnesota did not. After taking a red-eye flight, her ski bag was nowhere to be found.

“I had to spend an unplanned night in Minneapolis waiting for them,” Frost said, adding that they eventually arrived by way of Texas and North Carolina. That stress along with two nights of compromised sleep left her worried — needlessly, it turned out — that her energy might lag on race day.

Frost, who works as a field operations manager for the National Ecological Observatory Network – Alaska, will again race the White Mountains 100 in March and is scheming trips to other new races in the Lower 48. And wherever Frost goes, she seems to turn heads. At Idaho’s Fat Pursuit normally reserved for bikers and foot travelers, Frost became the event’s first skier in 2020, finishing 200 kilometers in 35 hours and 11 minutes.

“Thanks for being our beta tester Shalane,” the Fat Pursuit posted on Facebook at the time. 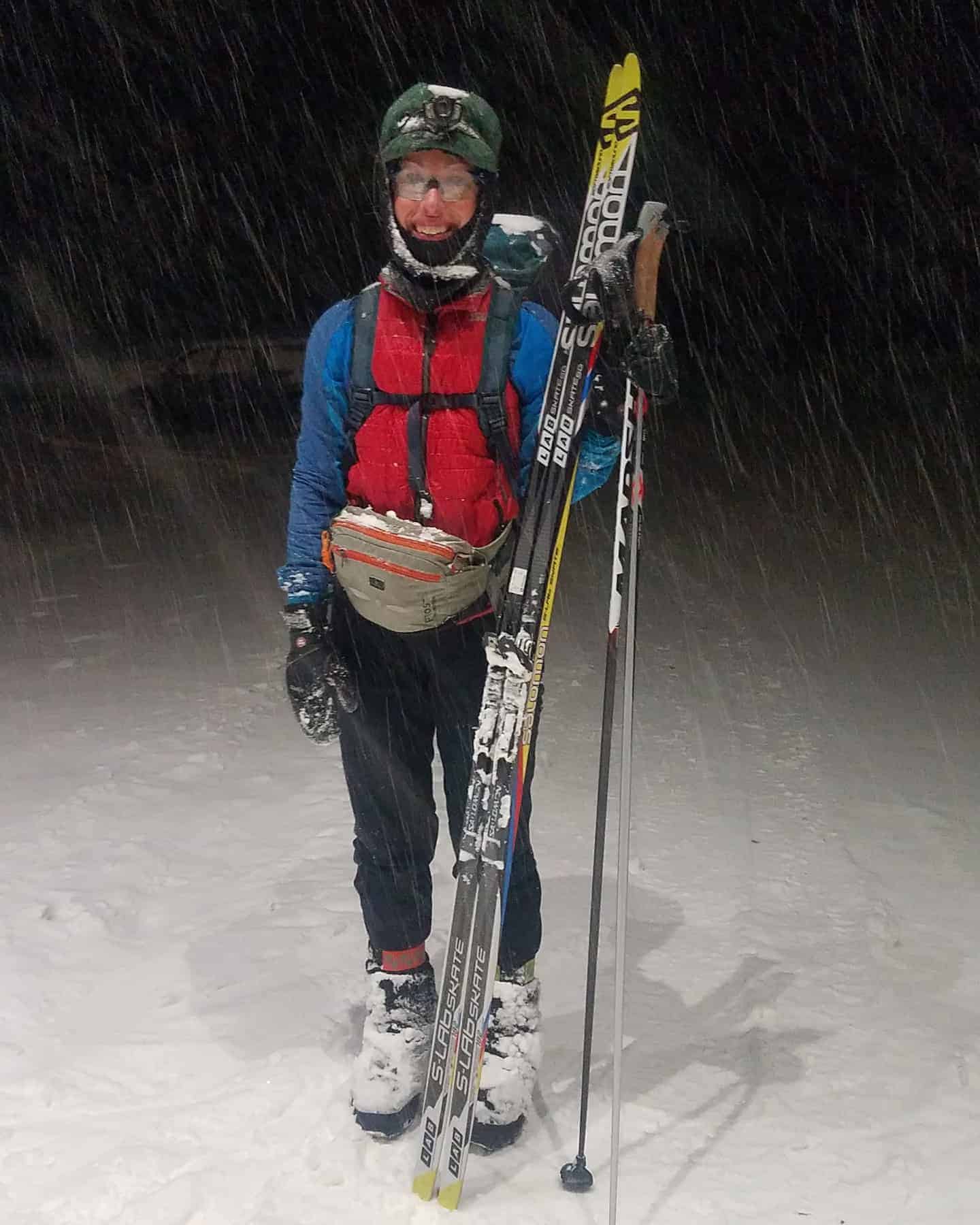 Shalane Frost after the Fat Pursuit.