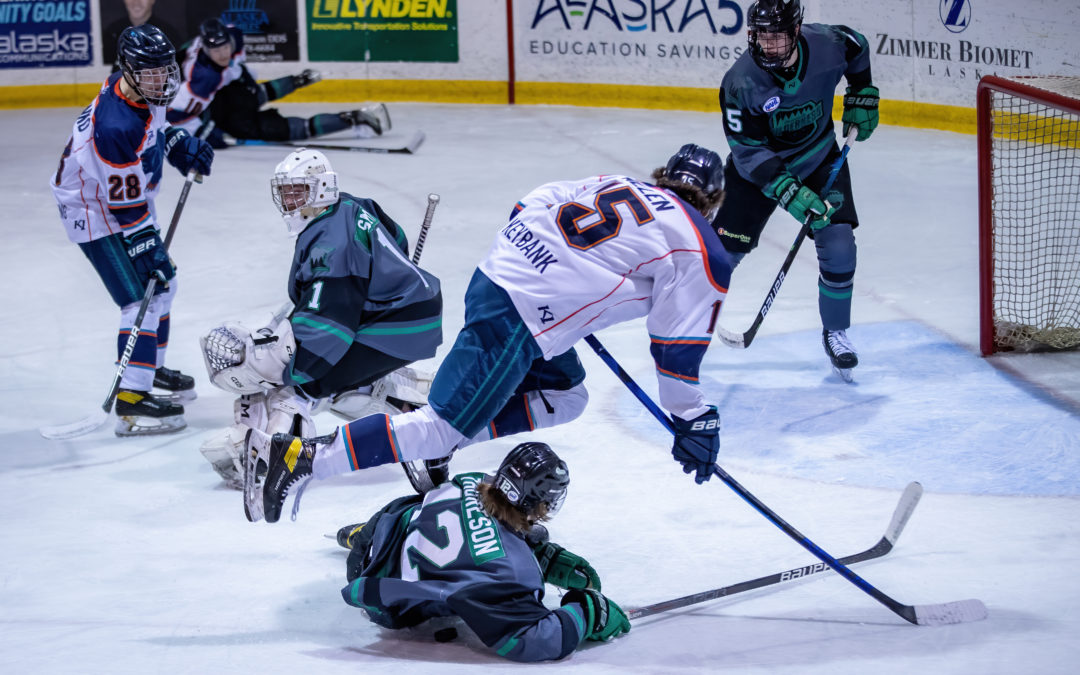 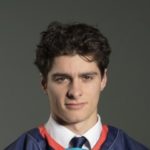 Colton Friesen and the Anchorage Wolverines truly saved the best for last.

Friesen’s tricky goal from behind the goal line at the 12-minute, 54-second mark of double overtime Sunday night capped another epic along the strip of real estate in midtown Anchorage which houses a pair of aging hockey barns. This time, a surprisingly chilly Ben Boeke Arena received the jolt of enraptured electricity when Friesen scored, and the Wolverines won Game 3 of the North American Hockey League’s Midwest Division Finals by a stirring 4-3 count over the Minnesota Wilderness.

Now owner of a 2-1 lead in the best-of-five series, Anchorage finished the home-ice portion of its inaugural season doing what it’s proven to do best – postings Ws at Boeke. Including the Robertson Cup playoffs, the Wolverines won nearly 71% of their home games (19-6-6).

Anchorage now sits one victory away from clinching a spot in the 29-team Tier II Junior A league’s final four. Game 4 of the division final is Friday afternoon in Cloquet, Minn. If the Wolverines advance, they’ll meet the other three division champions in the Robertson Cup tournament May 20-24 in Blaine, Minn., outside of Minneapolis 128 miles south of Cloquet.

Friesen, a 20-year-old from Winnipeg, Manitoba, earned his rightful spot as an Anchorage hockey hero. Mark the date – May 8, 2022. 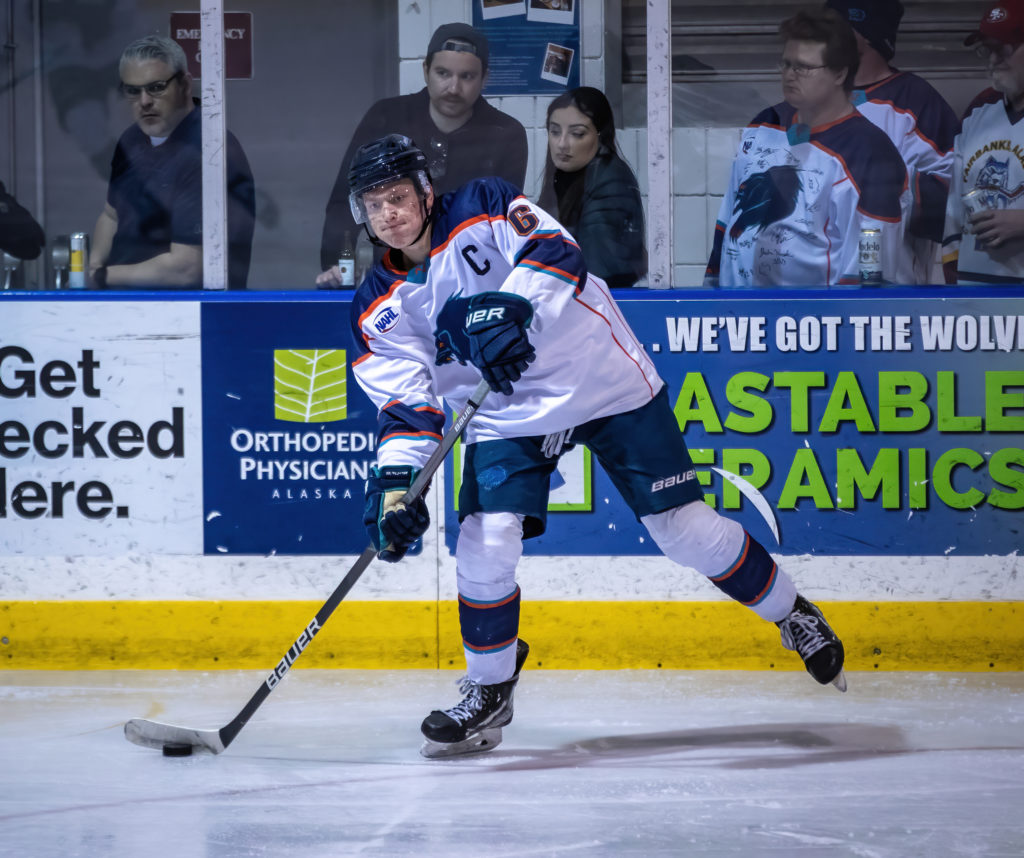 The Aces went on to win the first of their three Kelly Cup championship that season. What happens next to Wolverines will unfold soon enough. But don’t think those ancient Aces memories don’t connect with today’s Wolverines and their fanbase.

“It’s been an amazing experience for everybody in this community,” said Friesen, who also scored on the power play in the second period. “I know they lost their hockey team, but we got it back for these fans.

“They’ve been great all year.”

Maybe the only drawback from Sunday’s drama came with the announced attendance of 575. The Wolverines had managed to cram almost 1,000 spectators in for most of their home games, including playoff games Friday and Saturday night.

The Wolverines outshot Minnesota 47-33, including an 11-2 showing in the first 20-minute, sudden-death overtime. Wilderness back-up goaltender Karson Kausch (24 saves) proved tough to crack in relief of the injured Matthew Smith. 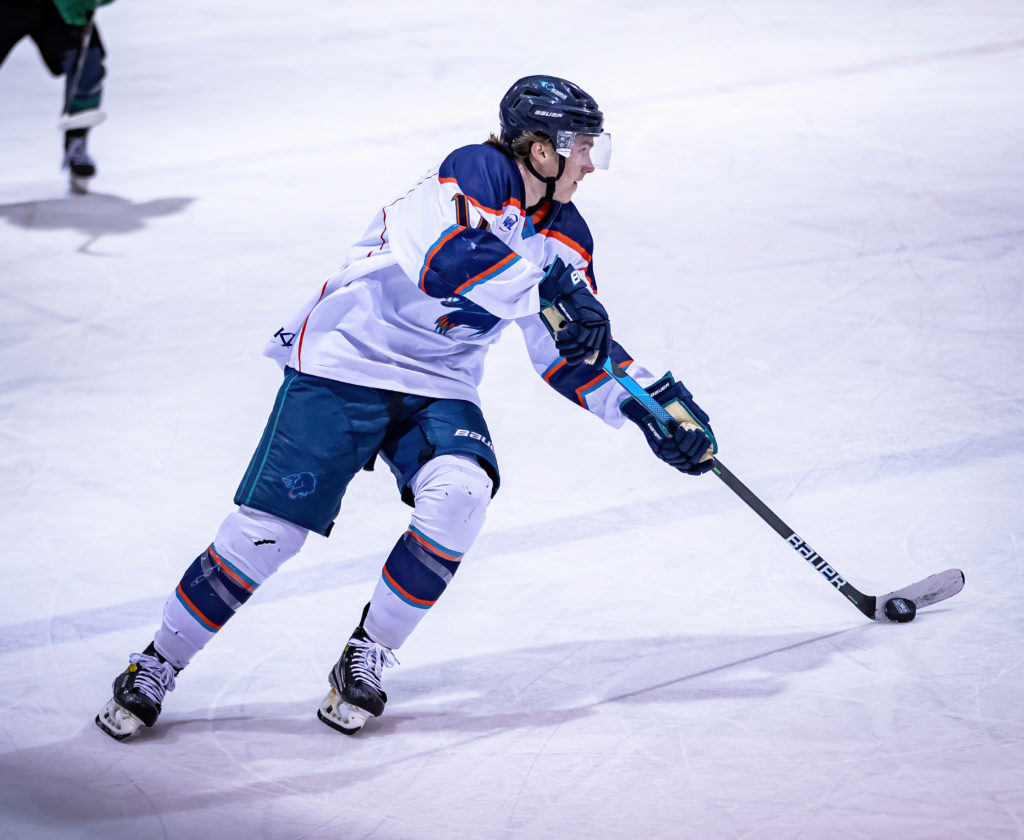 A left-handed shot, Friesen gathered possession of the puck in the low left corner. With his back to the boards, he moved closer to the cage.

We’re going to let him take it from there.

“Going up against the d-man, I kicked the puck up and got it on my stick,” Friesen said. “I turn and look up and see (Kausch’s) head is poking out. I saw the angle where I could bank it in. So, I shot it and it went right off the back of his helmet and went upstairs.”

Friesen said he scored on a similar play in his first game with the Wolverines back in October. He scored 11 goals and 25 assists in 60 regular-season games.

Anchorage product Cam Morris and Minnesota native Hunter Bischoff scored the home team’s other goals. Local boys Andy Ramsey, Morris and Hunter Schmitz picked up assists. Wolverines goalie Raythan Robbins, another from these parts, also earned an assist on Friesen’s first tally and recovered nicely from the night before to the tune of 30 saves. 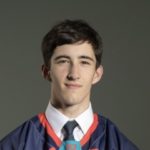 Robbins surrendered four goals in two periods of work during Saturday’s 7-2 loss to the Wilderness.

Robbins was at the opposite end of the rink when Friesen lit the lamp in double overtime.

“There’s no words to describe the feeling,” Robbins said. “When I finally heard the goal horn go off, I was ecstatic and just ready to get down there (for the celebration).”

Speaking of party time, Anchorage has yet to win anything. They must beat the Wilderness one more time, this time in Minnesota, and then win three more games to win the NAHL championship.

“We’re going to have some fun, get through the night,” Friesen said. “When tomorrow comes, we get it out the door and get ready for what’s next.” 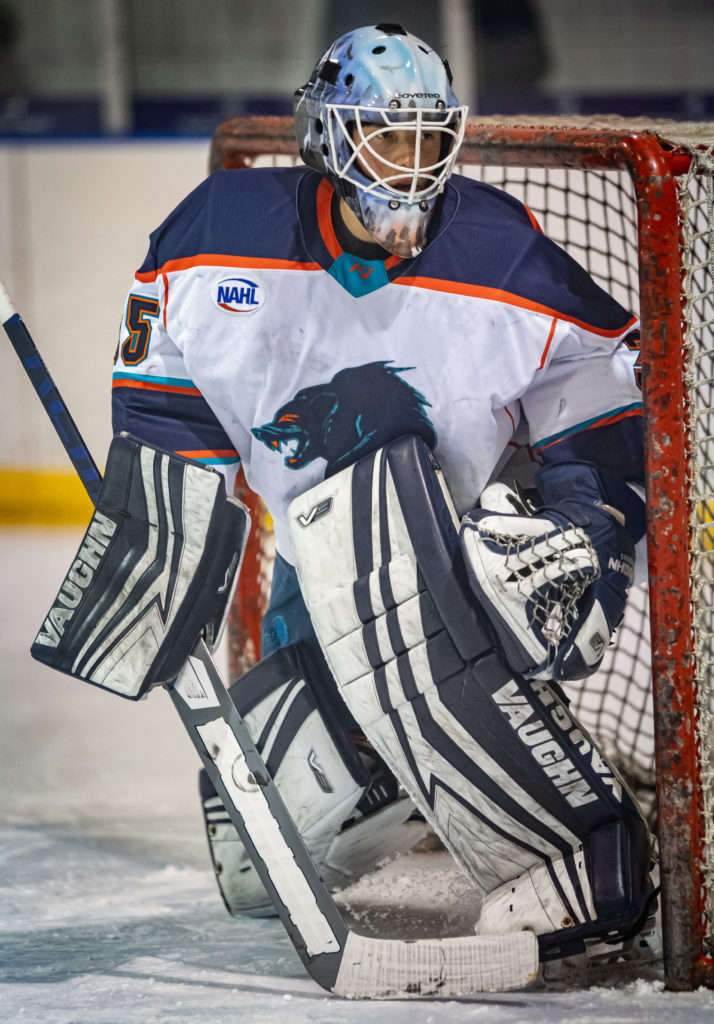