Prep Soccer: A goal made of Wolverines’ gold – Rodriguez lifts South boys to state title with score late in OT 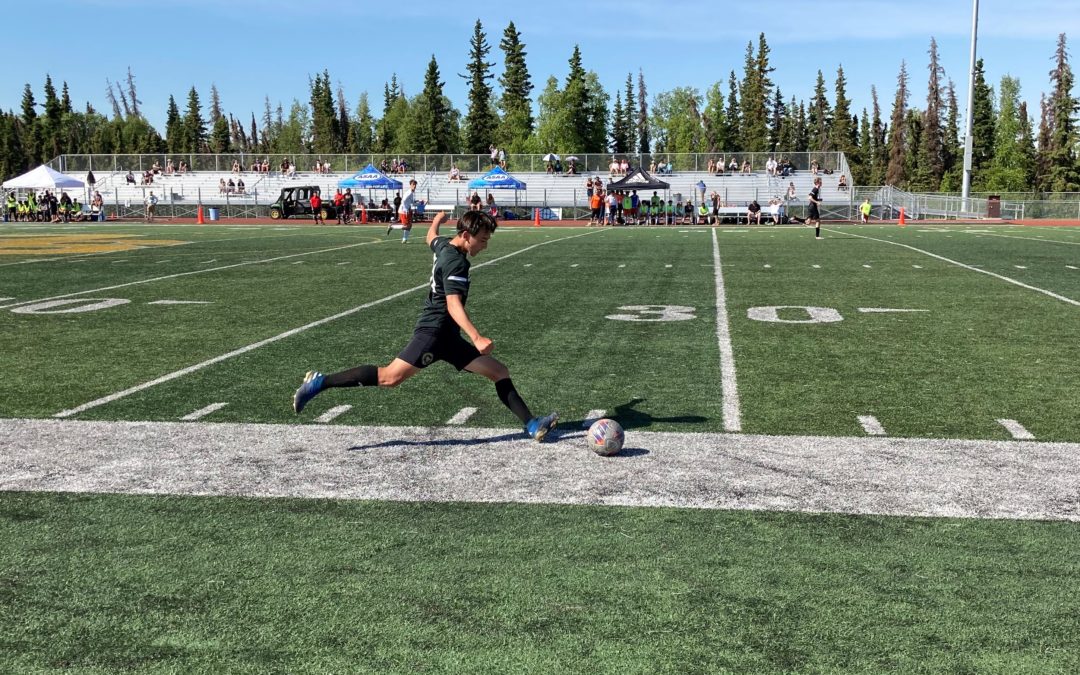 Kasen Rodriguez was fully clothed by the time he discussed the biggest sports moment of his young life Saturday evening. Seconds earlier, the South senior briefly lost his shirt for the best of reasons.

Rodriguez converted freshman goalkeeper Ralf Braun’s 70-plus yard goal kick into a Wolverines’ “gold of a goal” late in non-sudden victory overtime. South surged back to claim a thrilling 2-1 win over Cook Inlet Conference rival West in the Division I state championship match at Service High.

The game winner, Rodriguez’s sixth goal of the season, came in the 99th minute of play after the teams played to a regulation tie. Rodriguez corralled the bouncing ball off Braun’s bomb, scurried down the left wing and potted the victorious shot inside the far post. In celebration, he sprinted behind the West net, removed his jersey and waved it in his right hand as his teammates jumped all over him.

The referee blew the final whistle not long after, giving South its first DI title since 2017. It was also the Wolverines’ eighth championship since coming into existence in 2005. And to his credit, Rodriguez popped his shirt back on postgame.

“It would’ve been disrespectful not to do so,” he said. “In the moment, I’m thinking I probably sealed the deal for us.

“What a great way to end my senior season.”

South finished with an 11-3-3 record and defeated West for the first time this go-around after an April 26 1-1 tie and 2-1 loss on May 17. The Wolverines handed Dimond its first and only setback with a 1-0 victory in Friday’s DI semifinals. 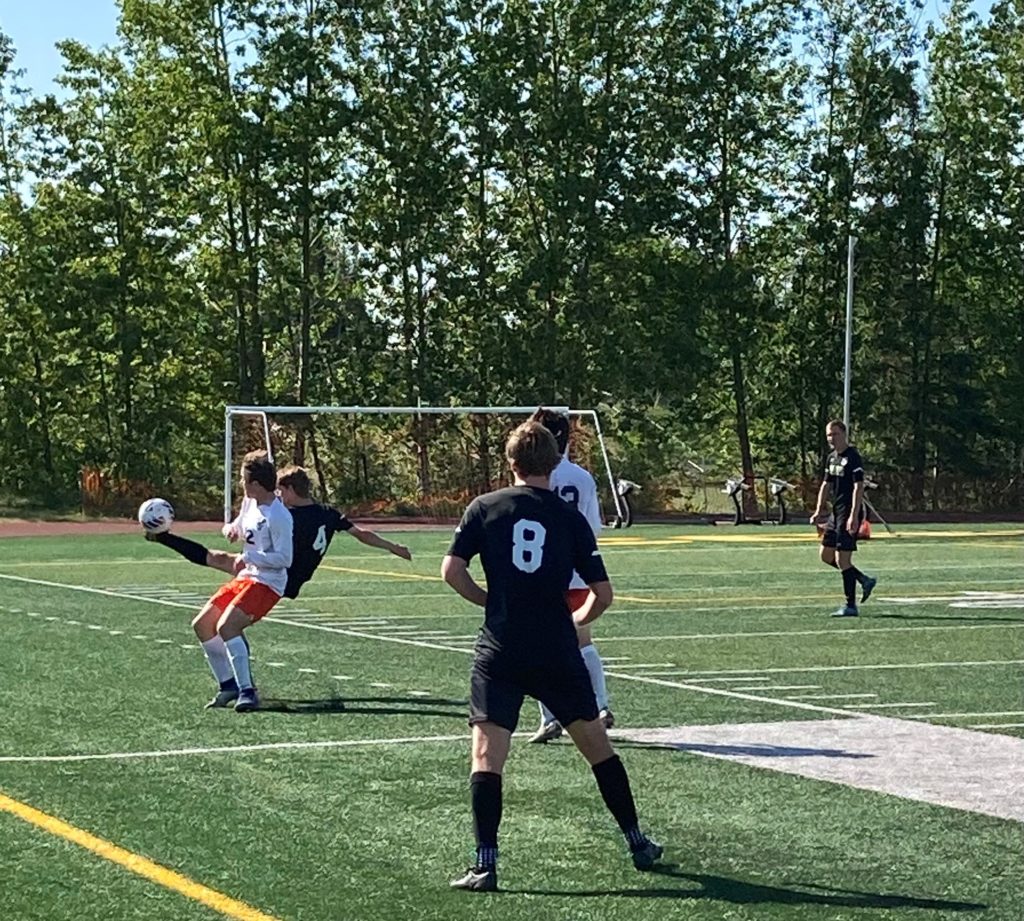 “Our determination really showed,” Braun said. “It wasn’t our best regular season, but we really pushed through.”

A year removed from the high school soccer season ending on a cold front with temperatures dipping into the low-to-mid 40s at Service, this May day couldn’t have been more glorious from a weather standpoint.

The sun was out in full force and the 70-degree temps made for players baking on the turf. Each teams’ bench players and coaches hovered under canopies, the shade offering a small respite from the heat.

“We all hydrated as well as we could before the game,” said dejected West sophomore Bennett Main, who scored his team’s goal. “But yeah, it was hot, and my mouth was getting pretty dry.”

In his disappointment, Main credited his team and especially the seniors for the heart shown in getting to the team’s third state championship match since the Alaska School Activities Association officially sanctioned soccer in 2000. The Eagles (14-2-3) also finished second in 2019 and 2009. 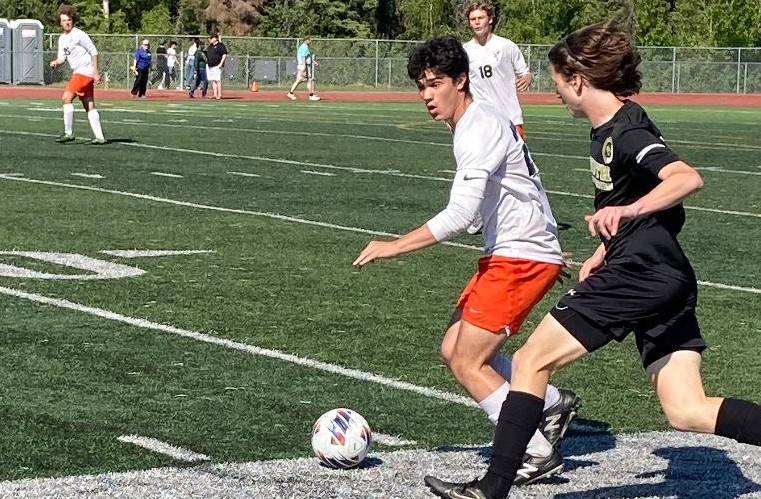 Main staked West to the 1-0 lead in the eighth minute, accentuating the game’s first goal with an interesting twerking display along the goal line. Senior Quinn Smith took the ball just over midfield and sent a through ball to senior Isaac Main on the right wing.

Isaac Main worked his way toward Braun and the right post. As Wolverines defenders converged, the ball ping-ponged off a few bodies before Bennett Main slid it into the net.

The Eagles doubled up South on first-half scoring attempts, 6-3, and put three shots on Braun to only one for the Wolverines.

South freshman Dawit Hoffman tied the game in the 71st minute. The speedster found space and ripped a shot from 30 yards out that beat West keeper Victor McGrew to his right.

The Wolverines caught a wave of momentum through the remainder of regulation. But both squads came up empty. The Eagles totaled 14 scoring attempts in 80 minutes to South’s seven (8-2 edge in shots on goal). 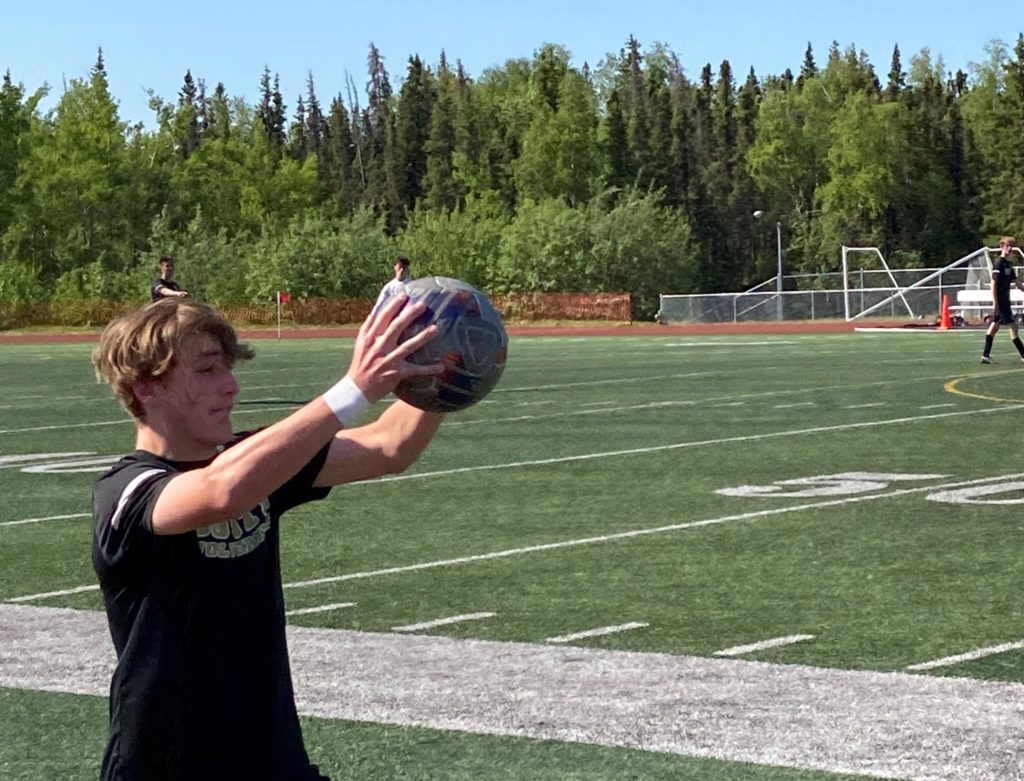 As is often the case in soccer’s non-sudden victory overtime, legit scoring attempts came at a premium. Each team equaled a single shot on goal in the two 10-minute periods. The back and forth of the extra session made the Braun to Rodriguez connection seem even more unexpected.

“Really, it’s all luck, that’s kind of what it comes down to,” Braun said. “We really picked things up after the tying goal.

“I saw that bounce, a defender missed it and the ball went through. And Kasen, he’s not going to miss (the shot) from there.”

As a freshman, Braun said the pressure started weighing down on him after West’s early score. The equalizer eased some of that tension, only for it all to disappear after Rodriguez’s “gold of a goal.”