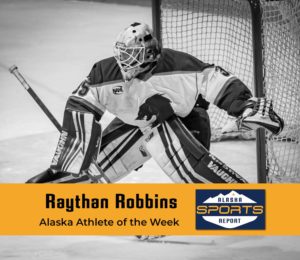 The 19-year-old Anchorage goaltender Raythan Robbins earned Alaska Athlete of the Week honors for his key role in guiding the  Anchorage Wolverines to the precipice of the NAHL’s Robertson Cup national title in the team’s inaugural season.

At the end of the week Robbins owned a 6-1-0 postseason record, a 1.88 goals-against average and stingy .946 save percentage.

He closed out the Minnesota Wilderness in Game 4 of the Midwest Division Finals with a 39-save effort on Friday. Robbins was also recently selected in the second round of the USHL (major-junior) Phase II Draft by the Muskegon (Mich.) Lumberjacks. The Wolverines begin the Robertson Cup semifinals on Friday in Minnesota.

The Wolverines magical first season came to an end at the hand of the New Jersey Titans, who beat the Wolverines 3-0 in the winner-take-all Robertson Cup Final in Blaine, Minn., on Tuesday night.