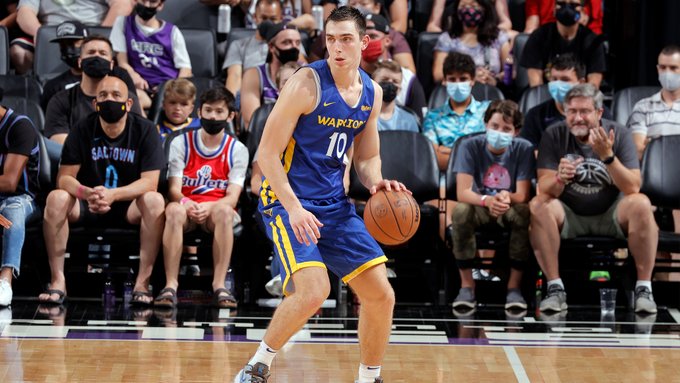 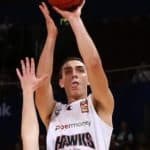 Justinian Jessup of Nome isn’t trying to complicate his job for the Golden State Warriors.

The 2020 second-round draft pick is back with the Warriors for summer league, and he got off to good start at the California Classic summer league.

The 6-foot-7 Jessup started all three games at small forward and averaged 8.3 points in 21.8 minutes per game.

“Summer league is a unique situation, but it’s going well so far for me,” Jessup said at a press conference in San Francisco.

“I’m just keeping it simple – hunting threes and straight line drives. I’m not out here to dribble the ball a bunch.”

After pumping in seven points in each game against the Lakers and Kings, Jessup bagged 11 points against the Heat on 4-of-8 shooting.

Justinian Jessup has the step back splash in his bag 💰💦 pic.twitter.com/sKPUuRlYeI

“He showed his ability to make shots. I think that’s something that he’ll continue to do over the next two weeks, but even in Australia — and dating back to Boise State — he’s been a guy that can really shoot the ball,” Cooper said at the press conference.

Jessup will join the Warriors for the NBA Summer League, which begins today in Las Vegas and features many of the league’s top 2022 draft picks.

It’s a golden opportunity for the Alaskan, who was draft-and-stash pick two years ago and has spent the last two seasons in Australia, where he averaged 13.4 points in 68 career games with the Illawarra Hawks. His high game was 26 points.

Last year, Jessup averaged 12.4 points per game with the Warriors in the NBA Summer League and lit it up from downtown on a 12-of-28 clip.

“I think these next two weeks, over these next five games or so, you’re going to see him make some shots and be the high-level shot maker that he is,” Cooper said.

Jessup has reportedly said he doesn’t want to go back to Australia, hoping he can catch on with the Warriors, maybe even their G League team in Santa Cruz.

“We’ll see what happens,” he said.