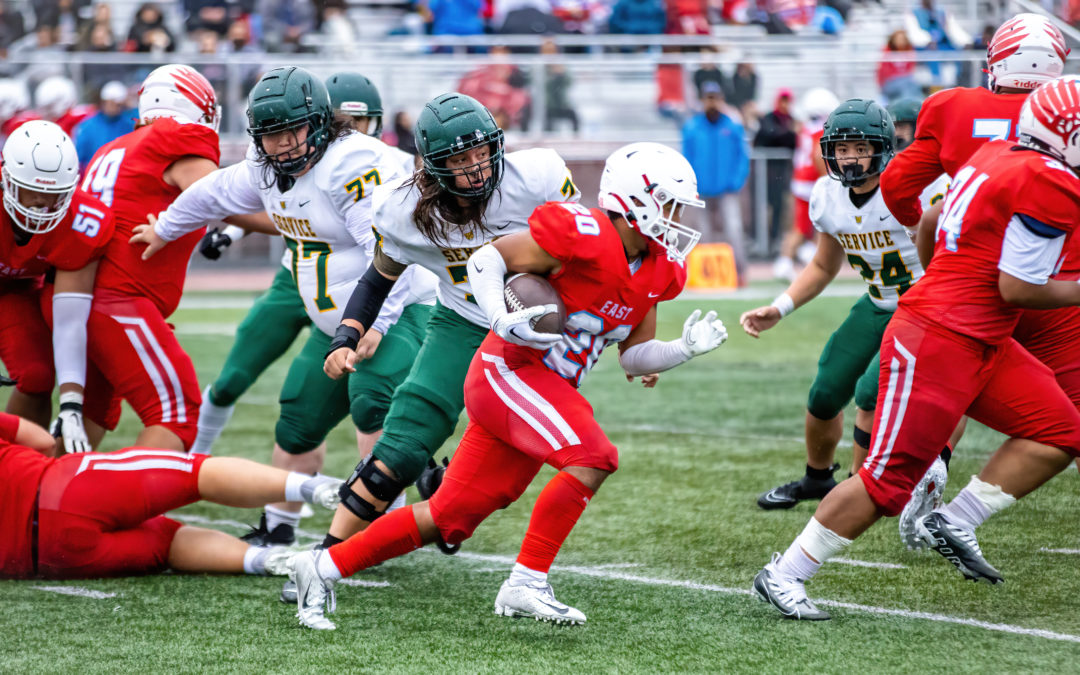 “It looks too much like September, October,” said Johnson, a soon-to-be Bettye Davis East High junior and member of the football squad. “I’d like it to be sunny and warm.”

But here’s where we sit. Way up north, where the interscholastic sports docket annually opens earlier than anywhere else. While often viewed as unique and kind of special, opening night amid Friday’s dark, gloomy, wet conditions made for mixed feelings despite East convincingly kicking off festivities with a 39-18 victory over Service.

“A lot of things did seem sort of off,” East coach Jeff Trotter said. “But maybe for us that’s because we’re so young. It was the first varsity game for a lot of these guys.” 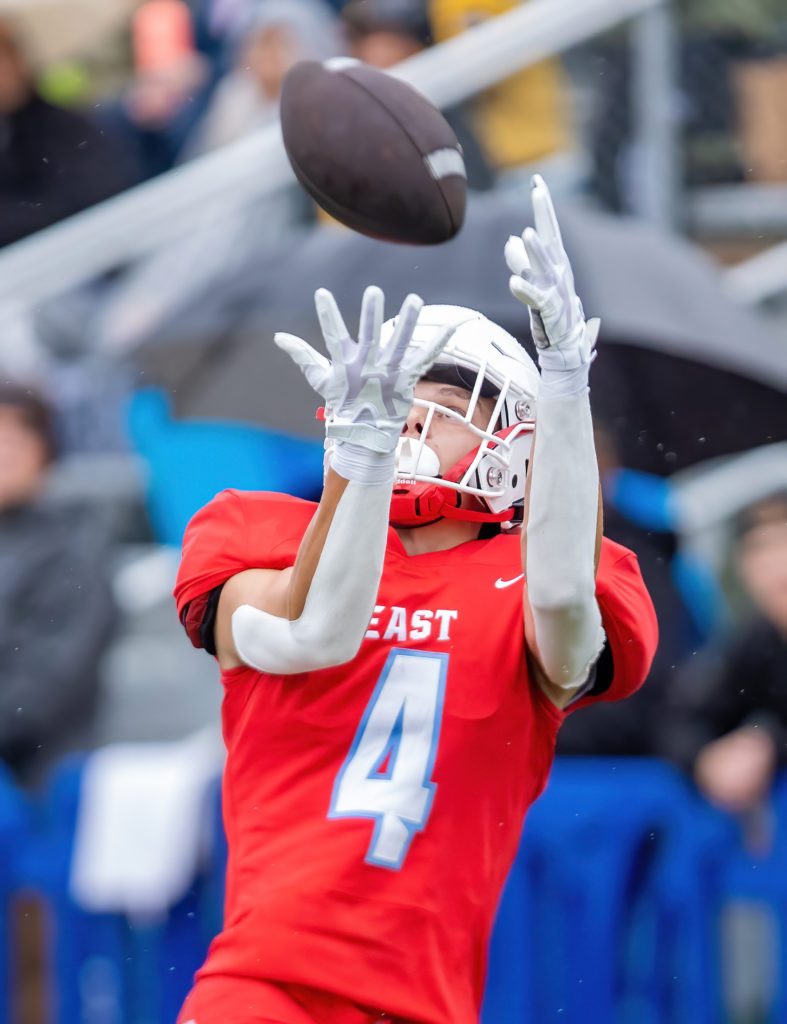 While accurate, East displayed plenty of the same on-field factors that made it last season’s ASAA Division I state champion.

In the teams’ last three meetings – Friday, an October playoff game and last season’s August opener – the Thunderbirds won by an average 26 points. All this accurate information suggests not much hanged in East’s world. But it entered a season anew without the star-filled services of the “law office” of Delaney, Johnson, Reed and Zimmerman.

The foursome – Damarion Delaney, Kyler Johnson, Elijah Reed and Deuce Zimmerman – proved the skill position foundation of the East juggernaut of the last few years. All four graduated and moved on to life’s next stage meaning the time has come for new blood to step in to starring roles.

Some of those guys showed out in the win over Service.

“I’ve been saying it, these guys have to make a name for themselves,” Trotter said. “Maybe we’ll have a new Damarion or Deuce. I don’t know?”

Of the season opener’s large moments, Sengchareun’s third-quarter touchdown may have been the biggest bright spot.

East sort of stalled after scoring the game’s first 19 points. Credit Service, which was bolstered by Ethan Hopper’s 5-yard touchdown reception from quarterback Jonathon Tautua with 4.8 seconds remaining in the second quarter. The Cougars limped through a 1-8 showing last season.

On this night, Service looked more stable and confident in its spread offense. Tautua passed for 238 yards despite completing only 32.4% of his passes, and back RJ Fine carried the rock 28 times for 126 yards and a late touchdown.

So Sengchareun shaking loose for the third quarter’s lone score more or less put a capper on the game’s competitiveness. After corralling the punt, he moved left to right across midfield and benefited mightily from Austin Johnson’s block of the punter near the Cougars’ 40-yard line.

“JT was running and broke free on my side,” Johnson said. “I was like ‘oh, I’ve got to get on my horse.’ I got on that horse and was able to block for him to get in for the touchdown.”

The teams each scored twice in the fourth quarter. Service receiver Preston Maes made four catches for 145 yards, including a 70-yard strike from Tautua in the opening seconds of the third. East sophomore Brandon Young caught two balls for 40 yards and a touchdown. Puni Pa’u and Keyshawn Chickalusion scored rushing touchdowns for the victors. 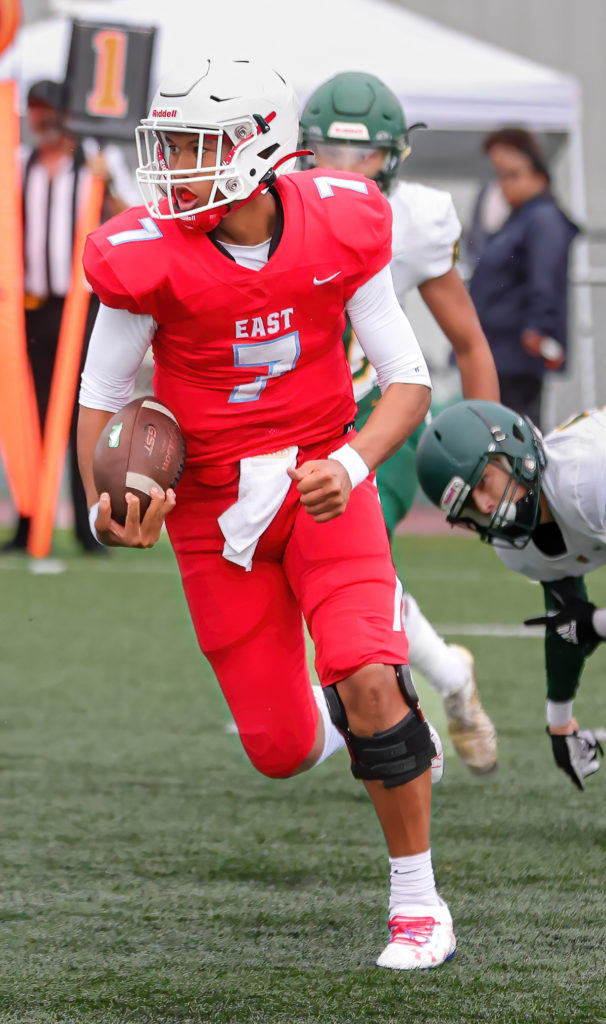 Again, let’s remind everyone that the Alaska School Activities Association now has all eight schools with enrollment of 501-plus students competing for the state’s top football prize as part of the same conference. Wild, wacky stuff and almost like real sports for East, Colony, Service, Bartlett, Dimond, Juneau, South and West.

Service gets a unique non-league or division challenge when it welcomes DII powerhouse Soldotna to town Aug. 20. The Stars lost the DII (151-500 students) crown to Lathrop last season.

Look for the Cougars to be ready.