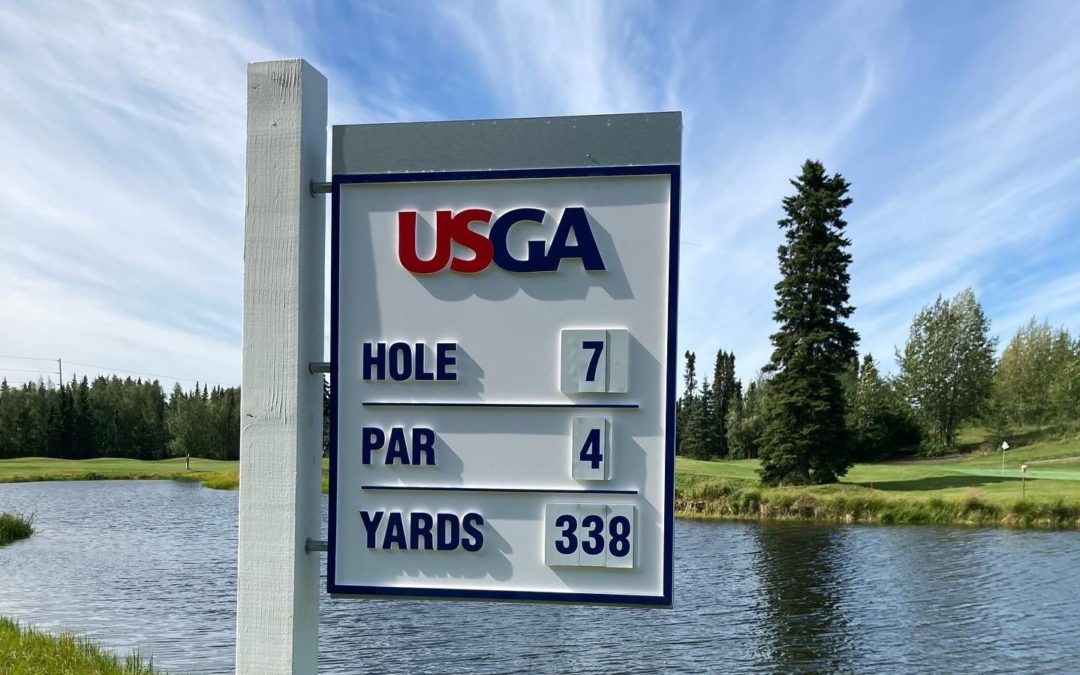 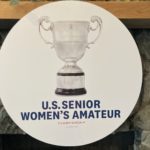 As one of the 132 qualifying golfers for the 60th U.S. Senior Women’s Amateur, Pam Chesla ventured through the registration process like all the other competitors.

However, Chesla’s status as the lone Alaskan in the first United States Golf Association national championship staged here garnered the kind of fanfare fit for the Great Land. She was welcomed at Anchorage Golf Course with loud applause and plenty of hugs from tournament volunteers, many of them golfing friends for decades.

“Well, it’s so different being the home girl and you’ve got your homegirls with you,” said Chesla, moments after concluding Sunday’s round. “They were here to cheer me on, and that’s what I believe about the women in Alaska and the golf.

“We’re all sisters. I’m used to having them around, and they were around.”

Chesla, 61, has resided in Hope for four years after 40-plus years in Anchorage. Her home course proved unkind during the weekend’s 36 holes of qualifying stroke play. With a 95-93-188 total, she failed to advance to the match-play portion of the six-day golf gauntlet. 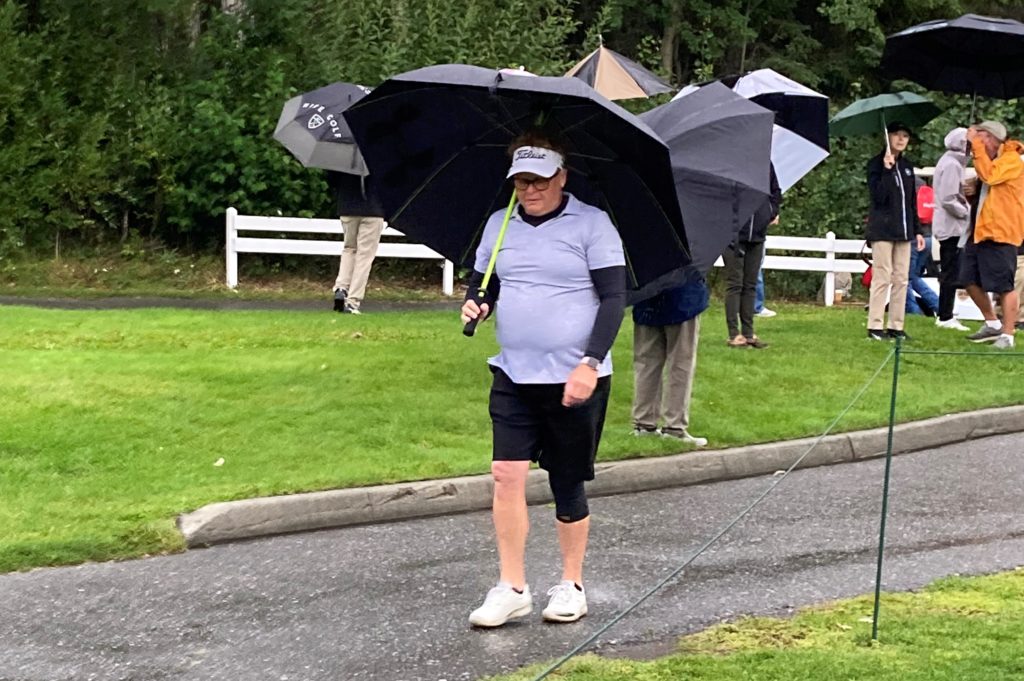 Spectators were welcome at no cost.

The Senior Women’s Am is one of 15 annual USGA championships. Being staged at AGC, the 35-year-old track on the Anchorage hillside, marks a historic moment. Alaska is now the 50th and final state to host an USGA event, and golf in the state received a much-needed shot of legitimacy.

“Alaska couldn’t have asked for a better way to showcase our beautiful state,” Chesla said. “We get to prove that we’re golfers as well. It’s like some people wondering if we have paved roads, still to this day.”

Becky Erickson is one of Chesla’s friends and current president of the Anchorage Women’s Golf Association. She’s also part of the volunteer tournament committee, the caddie for California’s Corey Weworski and part of the AGC food and beverage team.

Doesn’t matter if you play 18 holes a day, hit a random bucket of balls on the range occasionally or don’t know the difference between a birdie or bogey, Erickson can’t emphasize the USGA’s importance enough.

“Any golfer in Alaska should be excited about coming out and seeing the quality of play,” Erickson said. “I’m very proud as a golfer and an Alaskan that the USGA has recognized us.

“We’re a great place to play.”

Like most golfers, Chesla believes she could have performed much better. 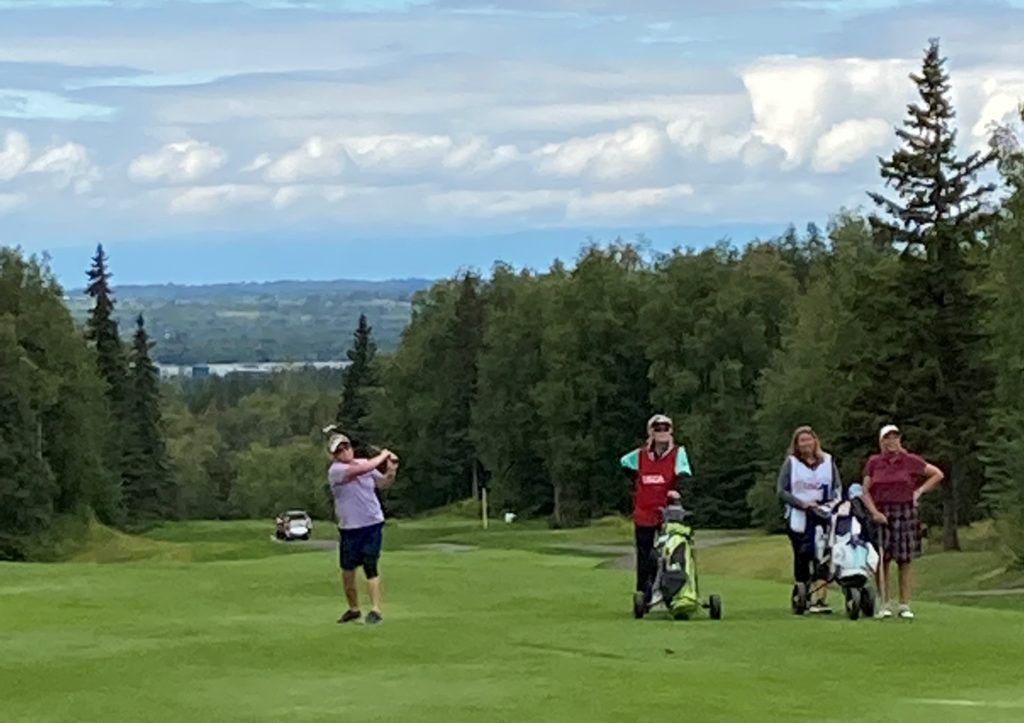 Pam Chesla takes aim at the flag stick on the par-5 No. 17 hole at AGC. Photo by Matt Nevala/Alaska Sports Report

Imagine taking a backswing with the weight of Alaska on your shoulders, or at least that of the 49th state’s rabid golf community? Good luck keeping the head down, following through and striking the ball cleanly.

“Seeing people slam the ball past you 100 yards sometimes was a little intimidating,” Chesla said.

The golf may not have been great for Chesla. Still, she said she was satisfied with the performance. Wife of 30 years and caddie Marcia Combes owes her a preferred beverage for hitting the right kind of shot on the Par-3 13th during Sunday’s round.

“I don’t mind saying I was bribed with bourbon,” Chesla said. “It worked.”

While the USGA experience may be over for Chesla from the competitive standpoint, she’s eager to enjoy the enormity of the event through its conclusion. The Senior Women’s Amateur championship trophy is a huge silver chalice aptly nicknamed “Big Bertha” for its largeness.

You may have heard Alaska is the country’s biggest state.

“I want that winner to be proud she pulled it off here in the last (USGA) state,” Chesla said. “It’s a prestigious thing anyway, but maybe engrave on their ‘the Last Frontier winner.’”

#FrostlineStudios really brought for us, the @USGA and the #USSeniorWomensAmateur ⛳️.