Quarterbacks Austin Johnson of East and Falealili Lefona of South stole the show Saturday in a Cook Inlet Conference clash that went from blowout to barnburner.

The T-birds won 20-12 behind Johnson’s two touchdown passes, but it was dicey late when Lefona took over the fourth quarter and nearly brought back his team back from a three-score deficit.

Making his first start under center, Johnson racked up 128 yards of total offense and threw scoring strikes of 17 yards to Alphonso Dyett and 20 yards to Deshawn Rushmeyer in addition to a 2-point conversion through the air.

“It was awesome,” said Johnson, who filled in for the injured Azariah Atonio. “The team made me feel welcomed, like I was always back there.”

The 6-foot-1 junior moved to quarterback from wide receiver for Week 5, but he also stayed at defensive back. He made a huge play in the second quarter when he deflected a pass in the end zone to deny a South touchdown. 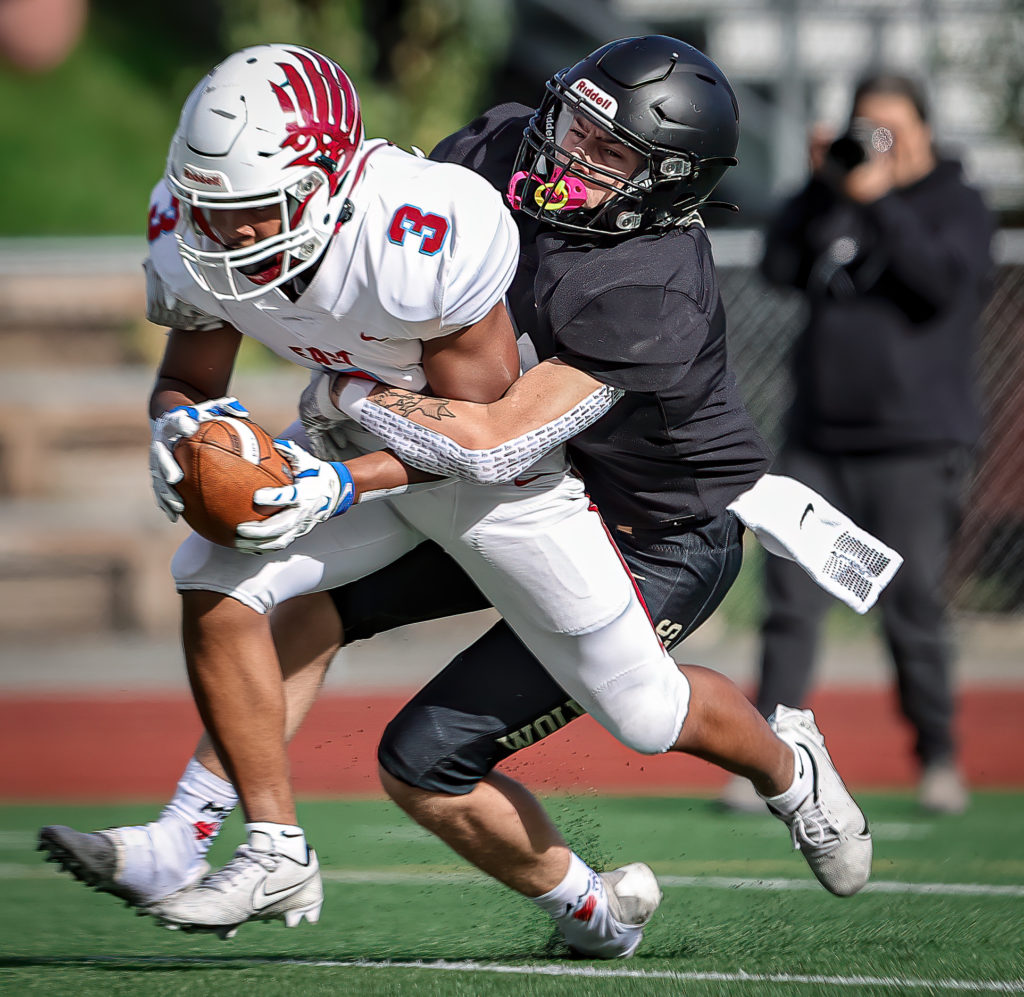 At the time, East led only 6-0 and South was going for it on 4th-and-14 from the 34-yard line. Lefona extended the play by avoiding the pass rush and looked to have found receiver Joe Stahla in the corner of the end zone before Johnson soared in to knock it away.

“The QB started to scramble and I hesitated like I was going to go in and help attack and then I looked behind me and there was a dude standing right there,” Johnson said. “The receiver got a little bit farther behind me so I turned and ran. I had to jump up as high as I could to tip that ball so the receiver didn’t catch it.”

On the ensuing drive, Johnson led the T-birds down the field on a 66-yard drive that ended with him throwing a dart to Dyett on a slant pattern to put East ahead 12-0 with 6 seconds left in the second quarter.

East’s first-half production was aided by Puni Pa’u and Rushmeyer. Pa’u had nine carries for 63 yards and scored the game’s first touchdown on a 5-yard run five minutes into the game. That score was set up by Rushmeyer’s 74-yard return on the opening kickoff.

East (2-3) kept it going in the third quarter, marching down the field on a 13-play, 79-yard scoring drive capped by Johnson’s TD pass to Rushmeyer. The T-birds converted two fourth-down plays on the drive, a 9-yard run by Pa’u and a 6-yard pass from Johnson to Brandon Young. 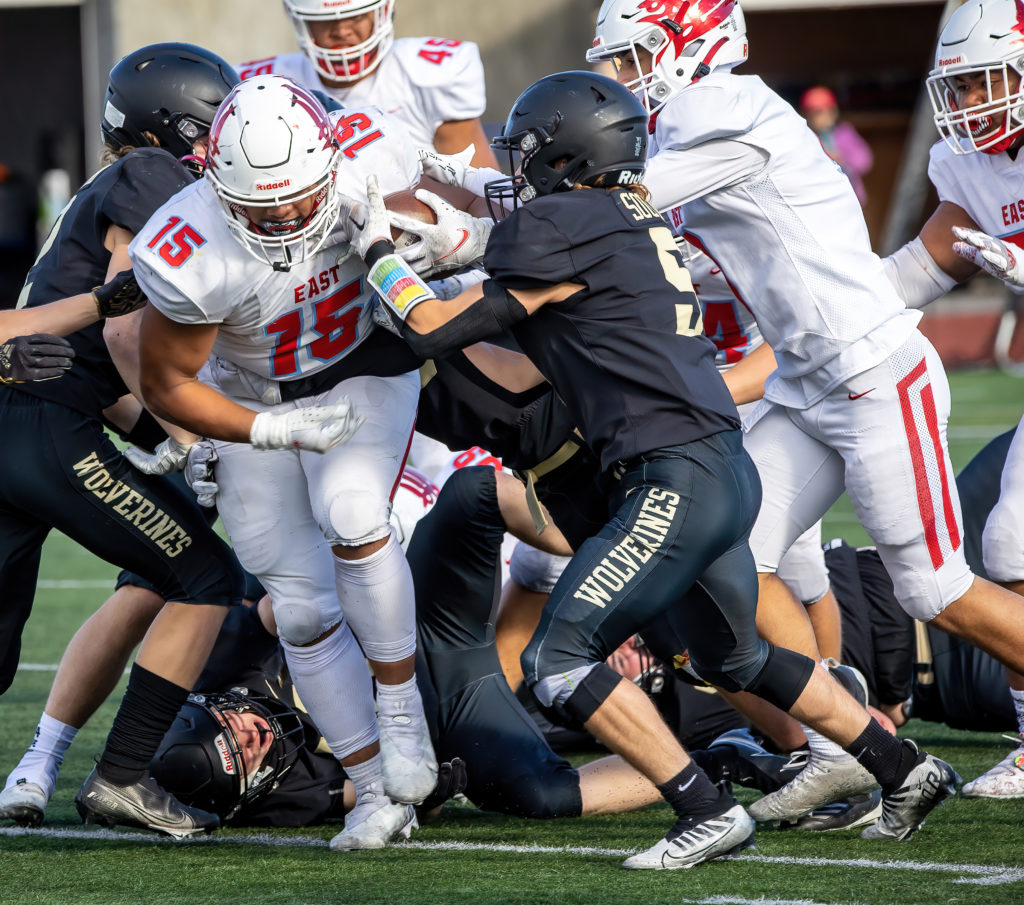 East running back Puni Pa’u had 9 carries for 63 yards and TD in the first half. Photo by Bryan Boyett/Alaska Sports Report

Johnson completed the 4th-down pass, the TD and the 2-point conversion all on rollouts as he looked very comfortable moving outside of the pocket.

“As the game progressed, it just became more natural and I started to see things that I usually always see when I have played quarterback,” he said. “Me throwing on the move is a big key just because I’ve got the legs to run, so I’ve got the option to run or pass.”

East’s win snapped a three-game losing streak while South’s defeat dropped the Wolverines to 0-5. They are better than their record indicates and displayed winning characteristics in the fourth quarter to give East a scare.

Lefona tried his best to lead his team back from a 20-0 deficit, orchestrating two TD drives and nearly pulling a rabbit out of his helmet for a third score. 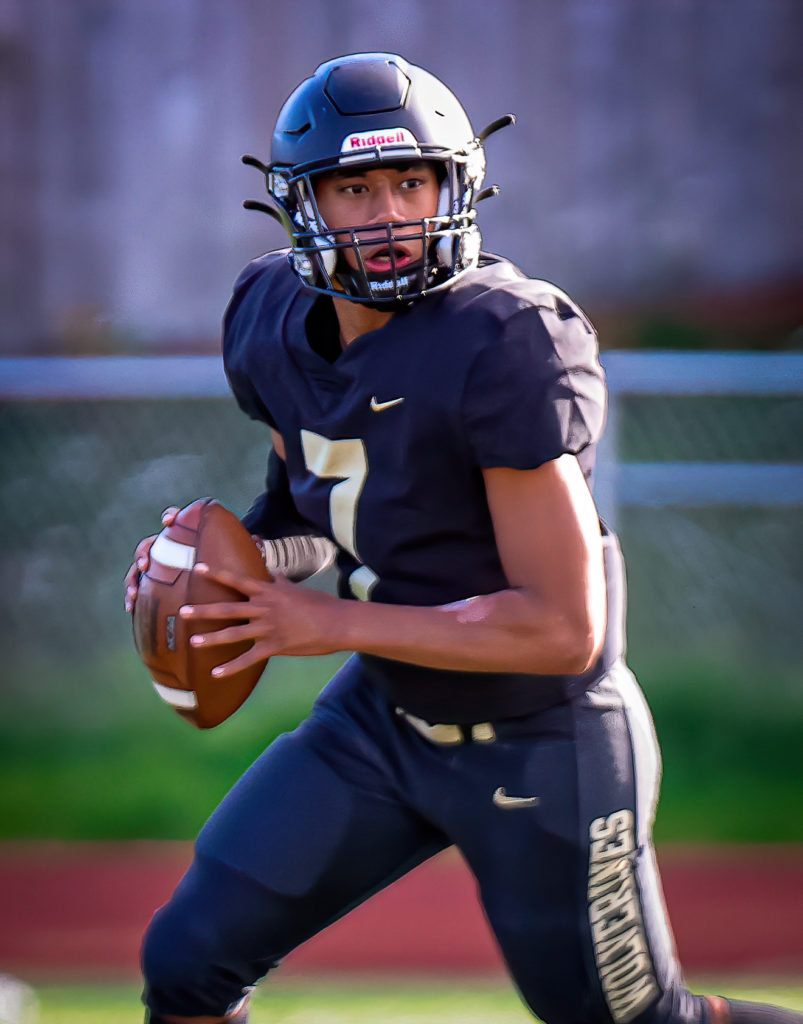 He was magical on the field, dancing and deking defenders with his legs to extend plays, and firing missiles under pressure.

Lefona’s 2-yard TD run capped a 90-yard scoring drive that got South on the scoreboard. After East fumbled inside its own 10-yard-line, South scored four plays later on Aaron Concepcion’s 4-yard run on fourth down. The Wolverines converted five fourth downs in the game.

Leading 20-12, East moved the ball before another fumble allowed South to bring its offense back onto the field with 2:50 to play. Lefona and crew marched all the way to East’s 40-yard line and faced a 4th-and-14 with 1:11 to play. A final Hail Mary went unanswered as his pass was just out of the reach of the receiver.