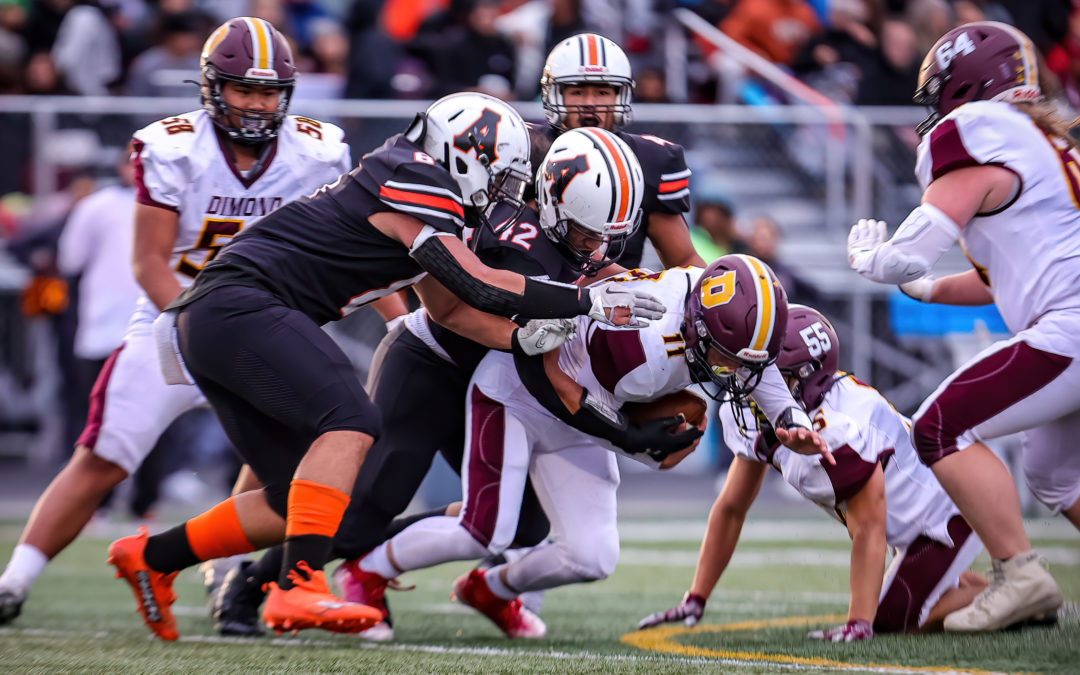 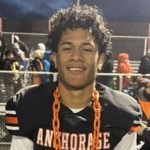 West running back Mason Tanoa turned what looked like a loss into a lost cause for the Dimond defense.

Tanoa on Friday made the play of the game in the third quarter after he shed two tackles in the backfield and turned on the jets for a scintillating 63-yard touchdown run that highlighted the Eagles’ 22-0 homecoming win in the Cook Inlet Conference.

The 5-foot-11, 180-pound junior back finished with two scores and did most of the heavy lifting in a rushing attack that racked up 278 yards and averaged 6.9 yards per carry.

But the star of the night was Tanoa, a dynamic rusher who is a mix of deception and destruction.

“Mason’s the real deal, dude,” West head coach Tim Davis said. “He’s got the burst and he’s got the physicality.”

Just ask the two Dimond defenders he discarded en route to his long TD run. It looked like the Lynx had him wrapped up in the backfield, but Tanao trucked one guy and stiff-armed another before making a cut and outracing everybody to the end zone on the second play of the third quarter to give West a 14-0 lead.

Tanao finished with 145 yards and two TDs, with his second score coming on a 2-yard plunge in the fourth quarter to seal the second straight victory for West (3-2). 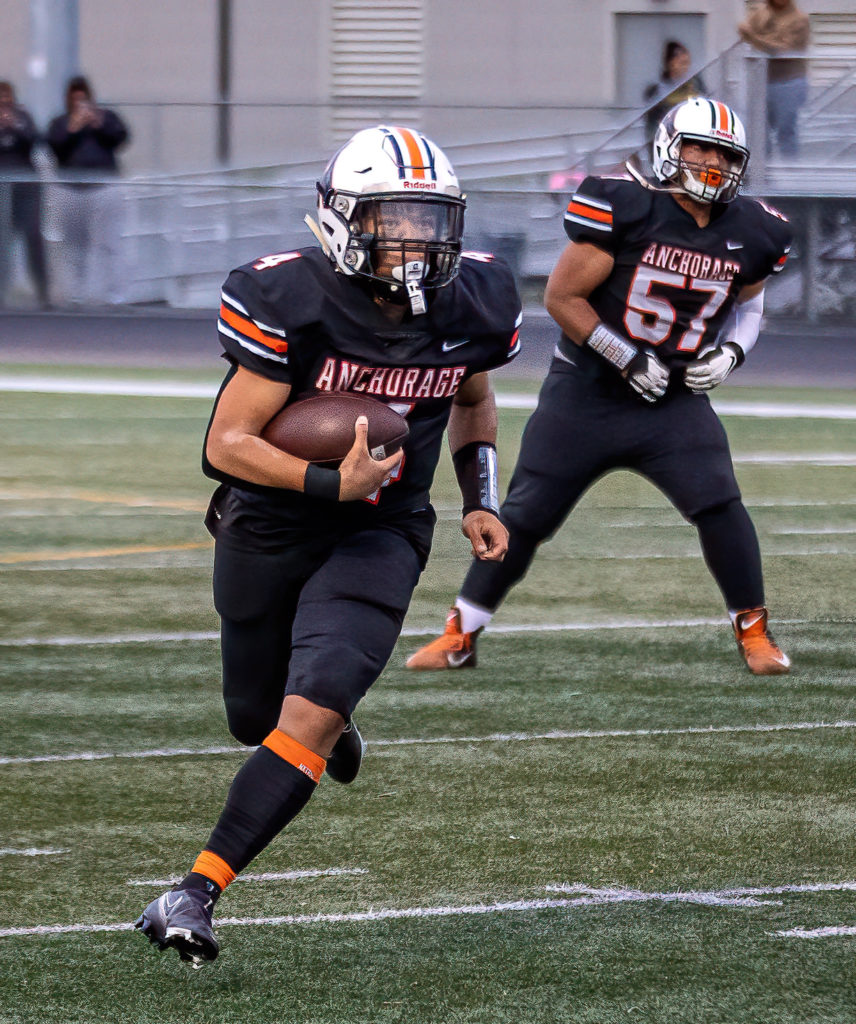 West Po’okela Puaoi on the way to a house call. Photo by Bryan Boyett/Alaska Sports Report

Puaoi, a junior, scored on 15-yard keeper in the first quarter. He also had 35 yards in the air as the offense generated 313 yards of total offense.

Sophomore running back Dylan Sanders also got in the act, making his first start for the injured Davis Iloilo. At 5-foot-7 and 145 pounds, Sanders is smaller than most backs, but Davis seems a big future for him.

The longtime West coach compared the diminutive Sanders to former Bartlett back Hunter Cargill and former Service back Justin Szymanski, who Davis played alongside with in the late 1990s. Today, Szymanski coaches the West running backs and his memorable moxie as a rusher has rubbed off on Sanders.

“He’s a Szymanski-type runner,” Davis said. “A small guy who comes in and scraps and fights.”

Early on, it looked like Dimond was going to wear down the Eagles. The Lynx on their first possession used an 18-play, 8-minute drive to reach the red zone but came away with nothing after a defensive stand that ended with a West sack. 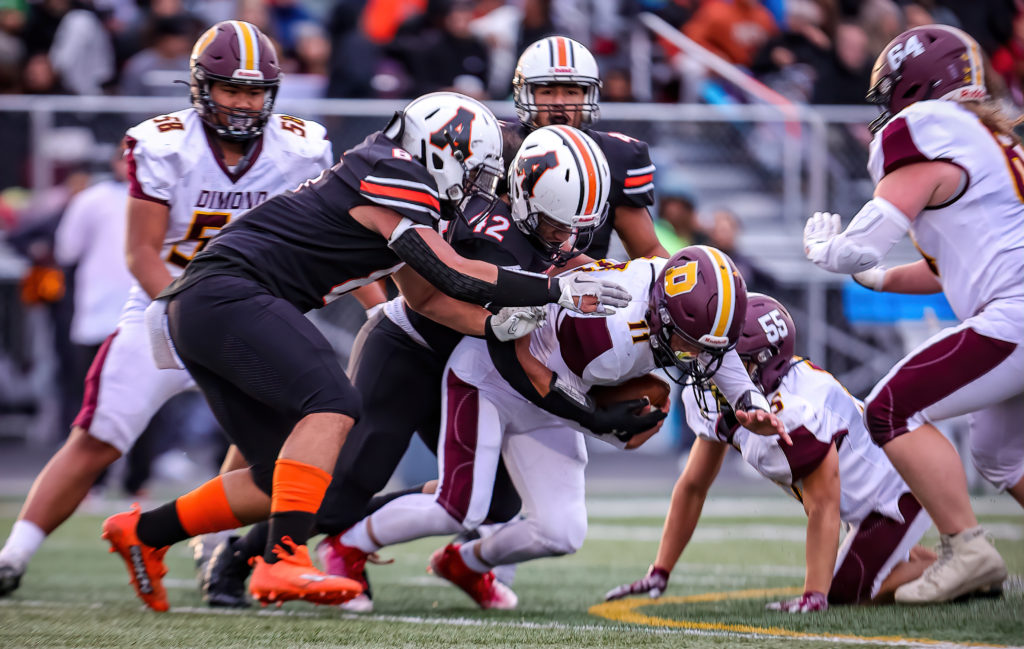 Dimond rushed for 53 yards on that first drive but had only 20 yards on the ground the rest of the way.

The Eagles kept constant pressure on Dimond quarterback Tyler Reese, who was under duress the entire game. Despite a persistent pass rush, he managed to complete 9-of-16 passes for 96 yards for the Lynx (1-4).

In the end, however, West proved to be too much as the Eagles controlled every facet of the game, including special teams.

“This is a player-led team. These guys are taking this thing over. It’s a joy to be a part of,” Davis said.

“If a coach is leading a team, you’ll be good. But when the players start leading it, you’re on to something. We’re not there yet – we have some big challenges and a lot of improvement to make. But the mentality of this team is one of the cooler group of kids I’ve been around.” 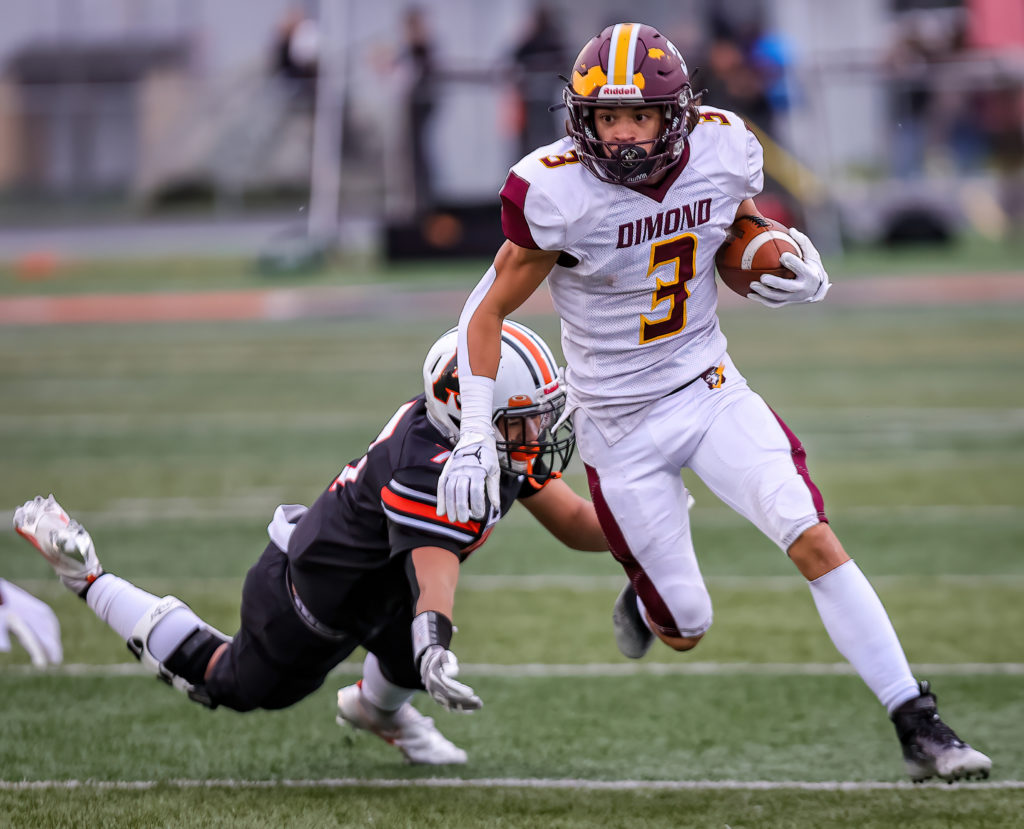