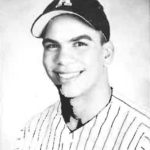 Few Alaska high school athletes have dominated three sports in the same season quite like Anchorage’s Ra Shipps did his senior year at East in 1992-93.

In football, the bruising all-state running back rushed for 907 yards and nine TDs in just six games.

In hockey, the all-state forward bagged 19 goals and 16 assists for 35 points in 27 games to help East reach the state championship game.

In baseball, he was an all-state catcher who hit a league-leading .613 during the 10-game Cook Inlet Conference season and later that summer knocked in the winning run in the American Legion state tournament title game.

The 5-foot-11, 220-pounder was an incredible athlete – a mix of brawn, bravado and brains (3.8 GPA). He was a student of the games he played and often took opponents to school.

Shipps had ‘superstar’ written all over him from an early age, dating back to his silver medal in the softball toss at the Jesse Owens Games in 1988.

But things really took off on a snowy Saturday in 1990 when the little-used sophomore rushed for 122 yards and a touchdown in East’s 36-7 win over Soldotna in the first official high school football state championship game.

From then on he became a focal point of the T-birds’ wing-T offense. He was big, fast and wore down defenses.

On the ice, Shipps was part of the No. 1-ranked East hockey team. At the Alaska Invitational, he netted a goal in a 5-2 win over Lake Ontario and the next night furnished two goals in 53 seconds to lead the way in a 6-2 win over Dimond.

There was no offseason for Shipps, who jumped right into baseball.

He was a lethal line-drive hitter who as a junior batted .470 and as a senior hit a staggering .613, which ranks fifth all-time in CIC history. In his final at-bat as a Legion player in 1993, Shipps drove in the go-ahead run in the seventh inning as East slipped by Service 4-3 to win the state championship.

Shipps went on to play college baseball at the U.S. Military Academy at West Point in New York, where in 1995 he earned Second Team All-Patriot League honors after batting .303 with 34 RBIs in 45 games.

After college, Shipps turned his attention to golf. In 2007, he placed third in his flight at the Alaska State Amateur Handicap Championship at Moose Run Golf Course in Anchorage. In 2018, he carded a hole-in-one at the 140-yard, par-3 17th hole at Carlton Oaks Golf Course in San Diego.

Anchorage’s Ra Shipps after his hole-in-one in 2018.