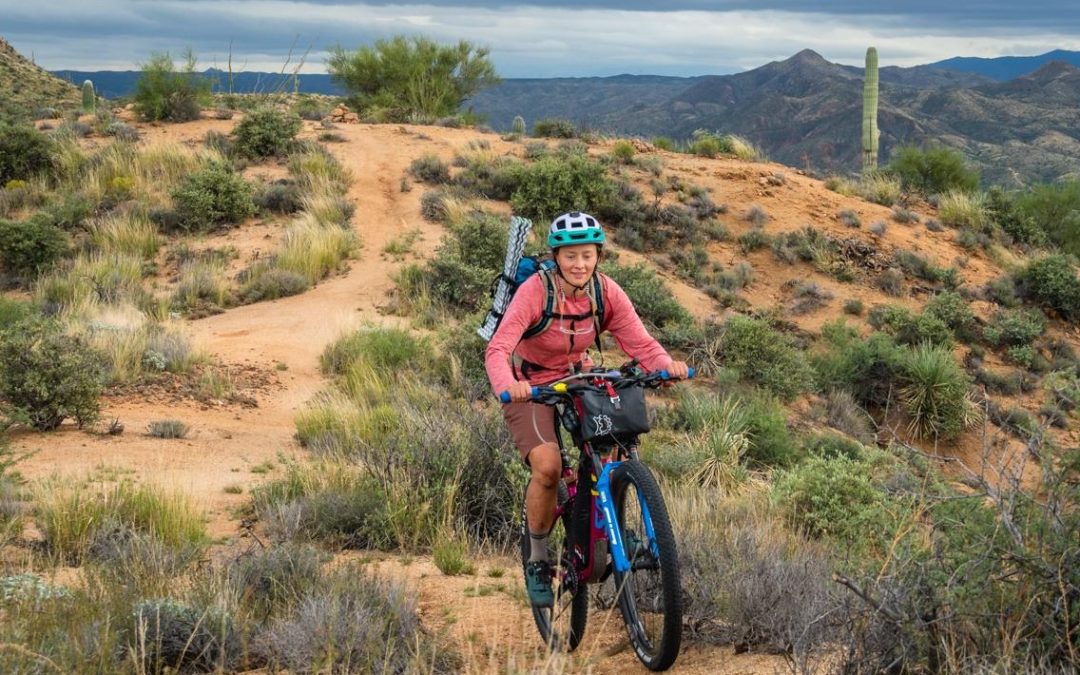 Anchorage’s Ana Jager is doing a fine job of following in the bike tracks of her “hometown hero” Lael Wilcox.

Earlier this month, Jager capped her first full season of bikepacking by winning the 800-mile Arizona Trail Race after more than 12 days on the trail.

Providing support was Wilcox, the most accomplished female bikepacker the sport has known. Wilcox, an Anchorage native now living in Tucson, Ariz., housed Jager and also picked her up at the finish.

The two go back to 2016, when Jager received a scholarship from Wilcox to ride the Baja Divide in Mexico, a route that Wilcox helped create.

“She was 19 at the time and took a quarter off of college to come ride the whole 1,700-mile route,” Wilcox said by email last week from Chile, where she is preparing for the Across Andes gravel bike race. “(The Baja Divide is) rugged and remote and she crushed it!” 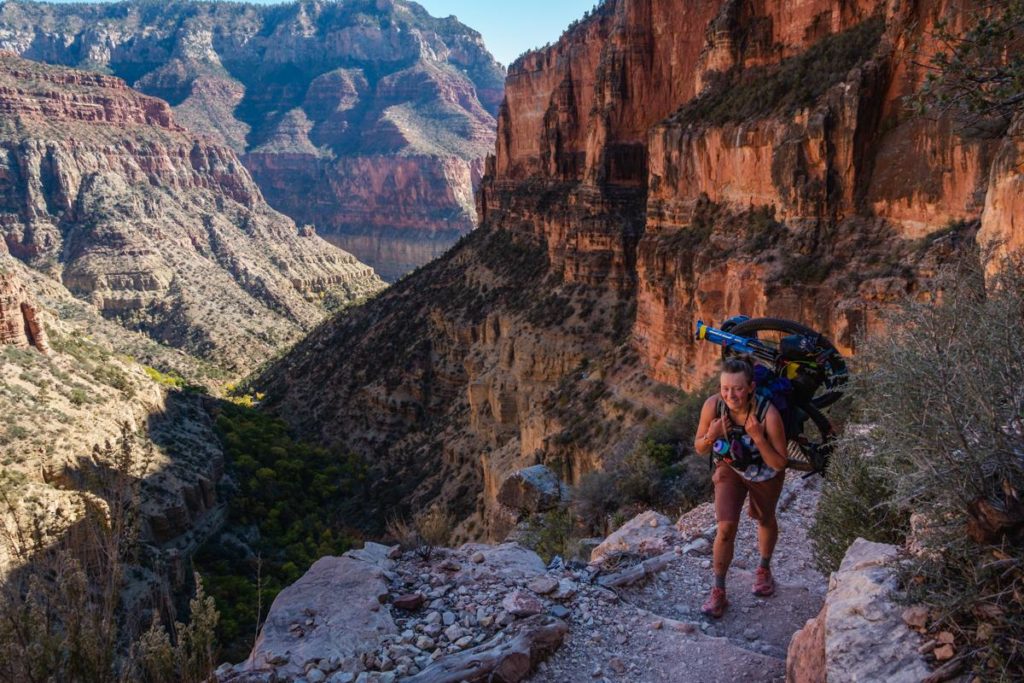 Ana Jager carries her bike through the Grand Canyon. Photo by Eszter Horanyi

Jager returned the favor this past spring by taking over Anchorage GRIT (Girls Riding Into Tomorrow), a middle school bike mentorship program founded by Wilcox in 2017 (Wilcox has since started Tucson GRIT).

“Ana started a similar program while she was in Bellingham, Washington,” Wilcox said. “She’s a perfect fit. She’s great with kids and cares about their well-being.”

Said Jager about Anchorage GRIT: “That’s one of my biggest passions.”

She’s also developing quite a passion, and talent, for bikepacking races.

Jager, 25, started the summer by winning the women’s division of the Tour Divide, a 2,745-mile route that roughly follows the Continental Divide from Banff, Alberta, Canada, to Antelope Wells, N.M. Billed as the world’s longest off-pavement cycling route and featuring nearly 200,000 feet of climbing, Jager completed the mostly gravel route in just over 19 days (Wilcox still holds the women’s record of 17 days, 1 hour set in 2015).

Jager was just getting warmed up. She followed June’s Tour Divide by placing second in August’s Colorado Trail Race, a 520-mile technical route from Denver to Durango that is self-supported (no aid stations or crew allowed).

The Arizona Trail Race, which required Jager carry her bike 26 miles through the Grand Canyon, was her encore. By finishing it and the two aforementioned events, Jager did something not even Wilcox has accomplished: she completed bikepacking’s Triple Crown Challenge in a single calendar year, joining Alice Drobna in 2015 as the only women to do so. 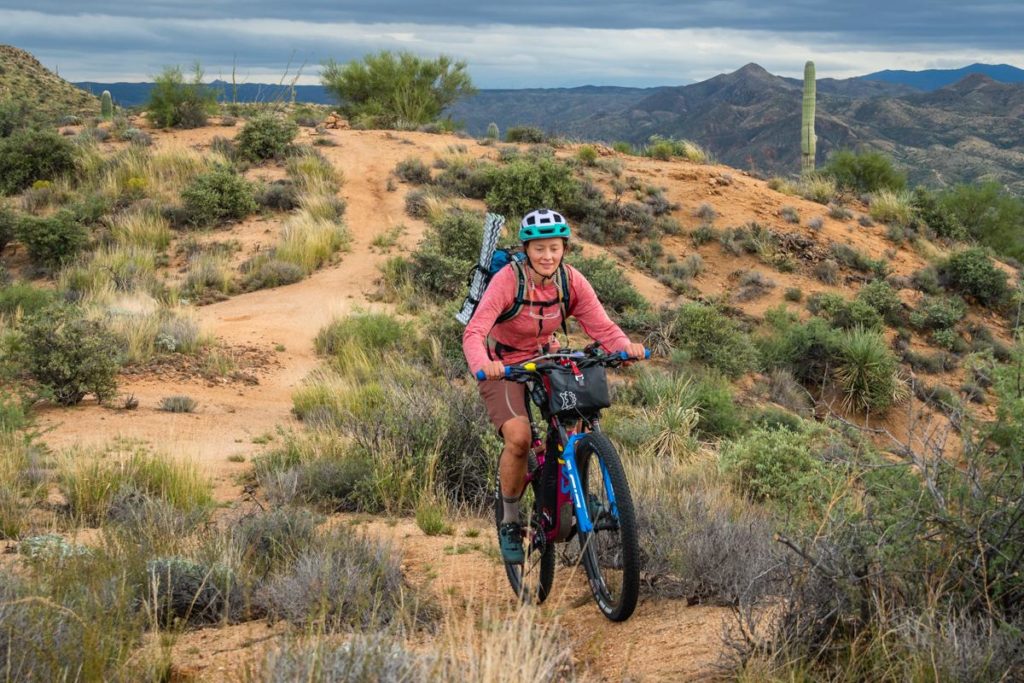 “What an accomplishment!” Wilcox said. “Perseverance, toughness and efficiency and get you a long way in these races. Ana is both tough and able to take challenges in stride.”

The Triple Crown was not something Jager was striving for when the season started.

“I went into the summer thinking I’d just do the Tour Divide,” said Jager, who’s worked to overcome a fear of riding in the dark and camping alone. “And then after that, I thought ‘I really like this. What can I do next?’ … I like the adventure more than the competitive side.”

But to be competitive, sleep deprivation is necessary. Jager has a goal of sleeping at least four per night.

“I’ve found the hardest thing in these races is the lack of sleep,” she said.

Jager, a 2015 graduate of East Anchorage High School, comes from a talented and competitive family. Her mother, Amy Johns, is an avid skier, runner and biker. Her father, Jim Jager, has joined Ana for the Kenai 250 (mile bike race) and still holds the skiing record in the 300+-mile Iditarod Trail Invitational. And her brother, Luke Jager, competed in the 2022 Winter Olympics as a Nordic skiing sprinter. 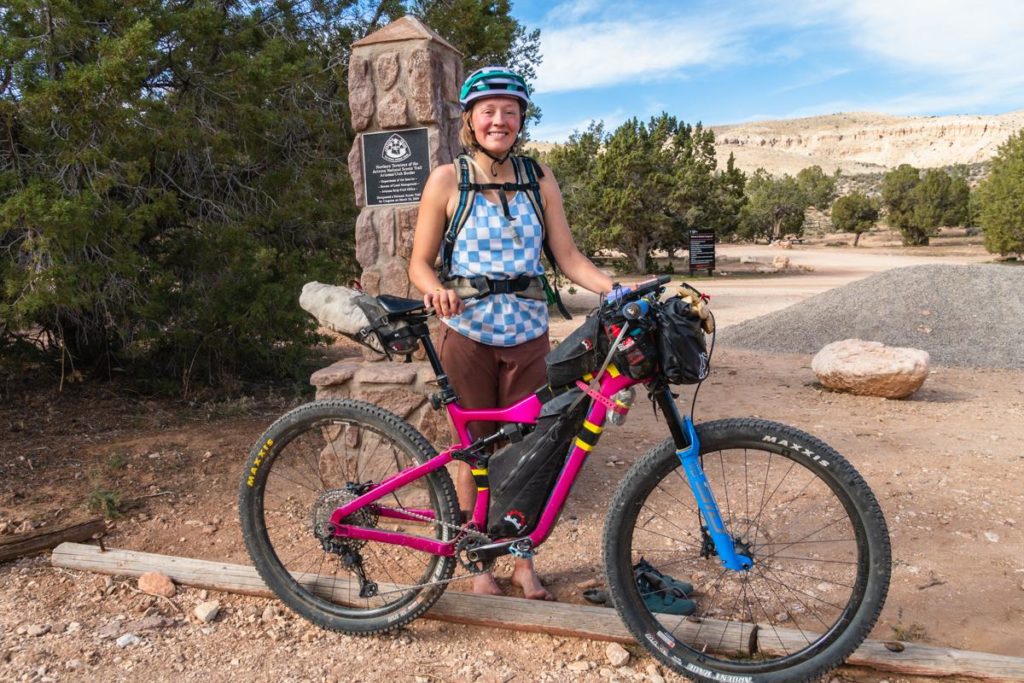 While Jager is among the top women bikepackers in the country, the fringe sport doesn’t pay her bills. She began the summer working on a carpentry crew and now is happy to be settling into winter and a nursing aid job at Providence Hospital.

Though she doesn’t officially have any sponsors, Jager has received gear from Anchorage’s Revelate Designs (a Revelate employee also loaned her a bike suitable for the Colorado Trail Race). For the Arizona Trail Race, the company Salsa Cycles let her borrow a bike.

Those challenges contrast with Wilcox, who in the past 15 years has ridden more than 100,000 miles — including all the major roads of Alaska — in more than 30 countries. Wilcox, 35, now has a website (Revelate Designs is one of 14 sponsors listed there) and even a Wikipedia page. However, before Wilcox became sponsored in 2018, she spent a decade working two jobs (in restaurants and bike shops) to support her riding endeavors. 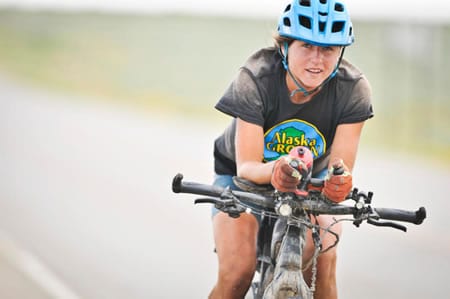 The pair does share a common desire: to race the Iditarod Trail Invitational, which travels about 300 miles from Knik to McGrath or more than 900 all the way to Nome.

“I would love to do it some day. The ITI is a level up because of the winter thing,” Jager said.

Said Wilcox, who will visit family in Anchorage in December: “I’m getting a fat (bike) for the first time since 2017 and getting closer to my dream of racing the ITI.”