Around The Rinks: Nolan Walker’s first pro goal is AK-on-AK crime; checking in with Alaska’s masked men (plus notes) 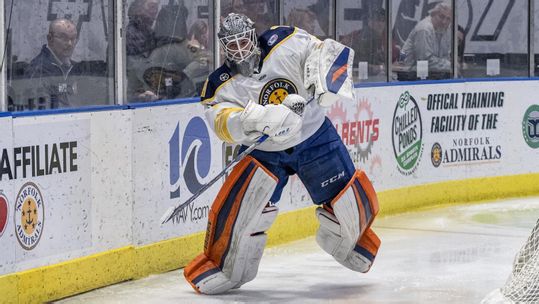 Enough Alaskans are out in the hockey world that occasionally one Alaskan’s glory is another’s groan.

Which brings us to Friday night in the ECHL, where Anchorage’s Nolan Walker pocketed his first pro goal – at the expense of Anchorage’s Michael Bullion.

Walker, a rookie forward for the Newfoundland Growlers and playing in his ninth pro game, maneuvered down the slot in the waning seconds of the second period and flicked a backhander past Bullion, who was tending goal in his first game of the season for the visiting Norfolk Admirals.

Big moment for Walker, who is in the play-for-pay game after a strong career at NCAA Division I St. Cloud State and broke through Friday in Newfoundland’s 7-1 win. In Bullion’s defense, the defense in front of him was not particularly stellar, judging by the ECHL highlight package of the game. He made some lights-out stops in the early going and finished with 30 saves. He’s technically a rookie too – he turned pro late last season after finishing his college career at Ontario Tech University.

Another Alaska angle from the game – Norfolk forward Kenny Hausinger of Anchorage racked a fighting major. He’s 1-1—2 in four games after missing the start of the season on injured reserve. (Speaking on injured-reserve status, Kenny’s younger brother, Cam, a forward for the ECHL’s Wheeling Nailers, went on the IR this week, retroactive to Nov. 6.)

While we’re spotlighting Alaska goalies in the ECHL, note that rookie Isaiah Saville of Anchorage delivered another stingy game Thursday for the Savannah Ghost Pirates. Saville’s 45 saves in a 3-2 overtime loss to the Florida Everblades marked the most saves the former West High star has made as a pro. 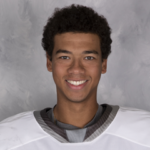 In two games this season – Saville’s start to the season was postponed by a bout of COVID – he’s 1-0-1 with a 1.94 goals-against average and .951 save percentage. Sharp stuff. Saville turned pro last spring – and killed it in the American Hockey League – after three seasons of Division I work at Omaha.

In the AHL, Ontario Reign goalie Pheonix Copley, the former NHLer from North Pole, made 18 saves Thursday in a 4-3 shootout road loss to the San Jose Barracuda, who include assistant coach Louis Mass, the former Alaska Aces defenseman and assistant coach from Anchorage. Ontario includes longtime NHL center Nate Thompson of Anchorage, so there big Alaska vibes in the rink Thursday.

In the NAHL, Kenai River Brown Bears goaltender Bryant Marks, a UAA commit from Wasilla, continued his excellent play. He made 30 saves in a 3-2 home loss to the Springfield Jr. Blues on Friday. Marks is 4-3-0, 2.08, .933 – he’s fourth on the 29-team circuit in save percentage and ninth in goals-against average. Also, Marks has allowed two or fewer goals in six of his eight starts.

Moving away from goaltenders to wrap this post, rookie forward Mac Swanson of Anchorage on Friday continued to shine for the Fargo Force of the USHL. Swanson scored a goal in a 4-3 shootout road loss to the Des Moines Buccaneers. He owns 3-6—9 totals in 12 games to tie for fourth on his club in points. Fargo forward Bret Link, a Colorado College commit from Anchorage, is first in assists on the team and tied for second in points with 3-9—12 totals in 12 games. And that Fargo-Des Moines game had another Anchorage connection – Des Moines’ coach is former UAA bench boss Matt Curley.