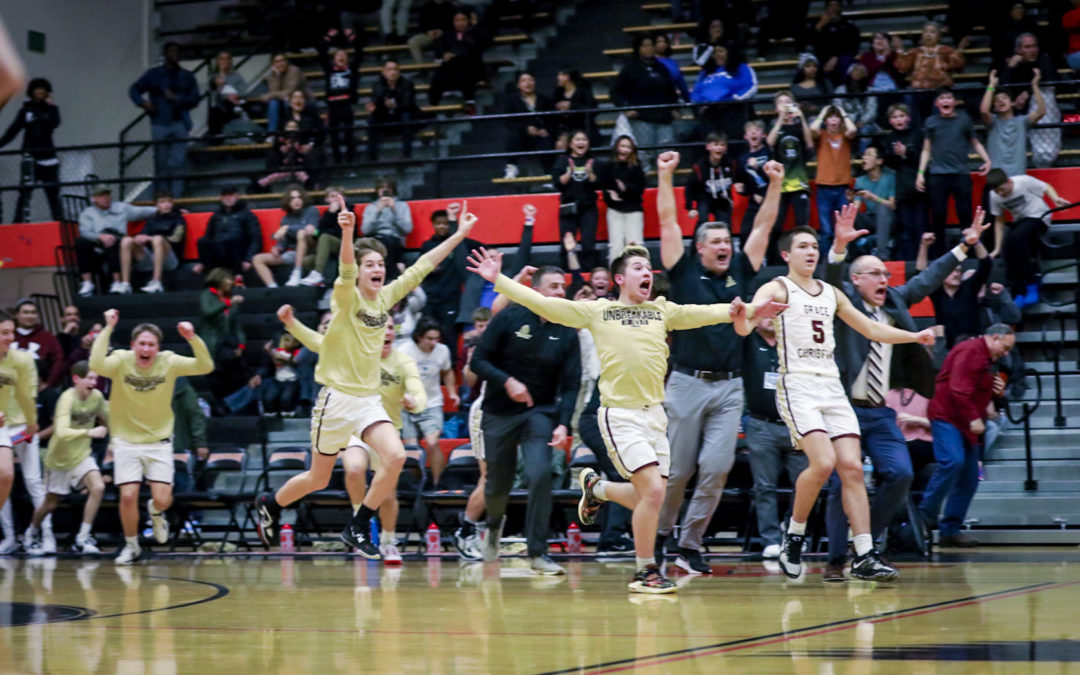 It may not have been David vs. Goliath, but it was close. No doubt the Grace Christian Grizzlies of Anchorage were in the deep end Saturday night against a powerful Heritage Christian Warriors team that was ranked as high as No. 14 in California’s Division I rankings.

Grace weathered the storm early and made it rain late as Joshua Ivanoff’s go-ahead 3-pointer put the Alaskans in control as they posted a historic 53-50 victory in the championship game of the Alaska Airlines Classic in front of a crowd close to 3,000 at West High.

Led by coach Jason Boerger, the Grizzlies became just the fifth Alaska team to win a Classic title for a high school boys basketball tournament that dates back to 1989.

The Lentfers were double trouble all night. They had a couple sweet give-go baskets, with Luke feeding Sloan and Sloan feeding Luke, like maybe they’ve done that a few times growing up together.

They stood tall as Grace’s size – 6-foot-7 Sloan, 6-6 Kellen Jedlicka and 6-2 Luke – allowed the Grizzlies to win the battle of the boards 25-21, denying easy second-chance opportunities that allowed Heritage from the Los Angeles area to torch Ketchikan and East Anchorage in the first two rounds of the tournament.

The Warriors (15-7) came into Saturday having trailed for only 10 seconds in two games. And when Tae Simmons threw down a two-handed tomahawk dunk in traffic to help the Warriors jump out to a 10-4 lead early in the first quarter, you couldn’t help but think, here we go again.

It didn’t happen, though. Grace’s Tyler Binder buried two 3-pointers to end the quarter, the last one coming off a sensational skip pass from Sloan Lentfer that tied things up at 12 after eight minutes.

Grace (11-2) stayed true to its identity, putting on a half-court clinic and getting big shots along the way. Ivanoff twice hit big 3s in the second quarter, the second one putting Grace ahead 23-18. Moments later, Jedlicka’s layup pushed the cushion to 27-20 – the largest of the game and the largest deficit for Heritage since taking the court in Alaska.

Seven Bahati and Giovanni Goree stepped up with star teammate Simmons struggling to get going. The 6-foot-6 Simmons came into the game averaging 20.5 points for the tournament but managed only four in the first half. Others picked up the slack.

Bahati (14 points) was his usual explosive self as the 6-foot-4 skywalker was money around the rim. He was also effective on defense. He had nine points over the the second and third quarters, with his free throw putting Heritage ahead 37-36.

Goree (20 points) was in takeover mode as the 5-foot-10 point guard attacked the rim and showed off a soft touch over taller players in the paint. He had 11 of his team’s 14 points in one stretch of the first half. His and-1 drive gave Heritage a 40-38 lead and he also swished a 3-pointer to give his team a 47-44 lead in the fourth quarter.

Simmons had a dunk off a dime from Bahati to give Heritage its final lead at 49-45.

Grace played giant killer with the help of the ultimate equalizer in basketball – the 3-point shot. The Grizzlies outscored Heritage 24-6 from long range, getting four 3s from Ivanoff and two apiece from Binder and Luke Lentfer. Ivanoff and Lentfer each knocked down treys in the fourth quarter with the shot clock winding down, both times getting the shot off with about 2 seconds on the clock.

Ivanoff was incredible. With his team trailing 49-47, he drained the biggest 3-pointer of his life – just moments after shooting an airball. To have the confidence to come back in that situation is nails.

Credit also goes to Jedlicka, who sank 3-of-4 free throws in the final 71 seconds.

Heritage had a pretty good look at a tying 3-pointer in the final seconds, but the ball bounced off the rim, sending the Grace players and coaches running onto the court in celebration. 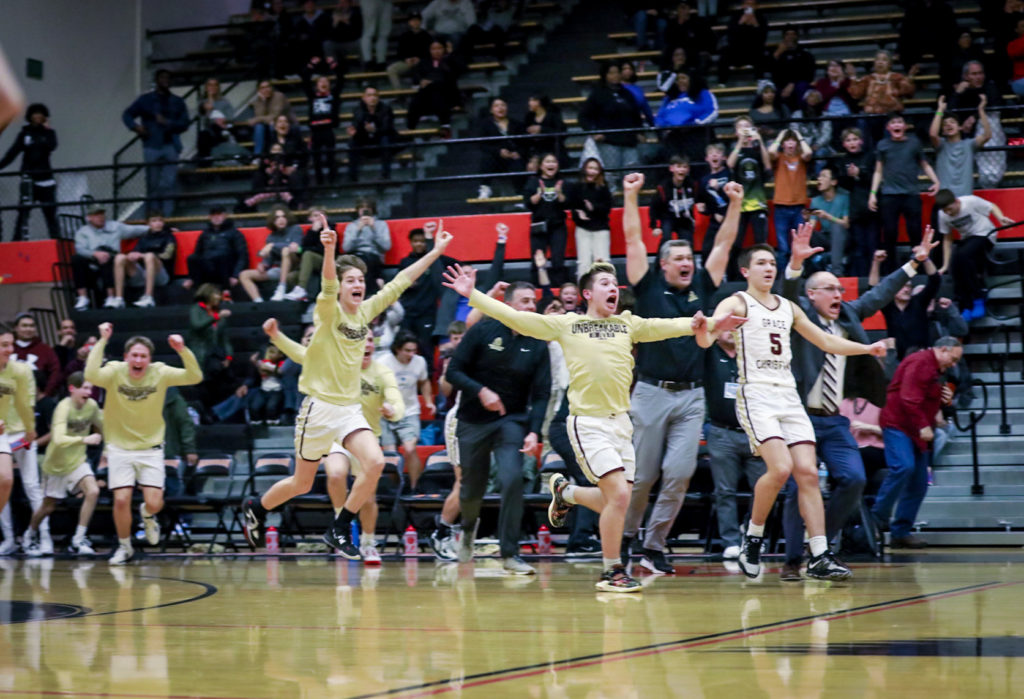 In a battle between Anchorage’s two oldest high schools, the East T-birds outscored the West Eagles 23-15 from the free-throw line to pave the way in a 68-62 victory.

Deshawn Rushmeyer went 10-for-11 from the foul line on his way to scoring 18 points and earning a spot on the all-tournament team. Akeem Sulaiman – another all-tournament pick aided by his record-breaking eight blocked shot performance against Higley (AZ) – added 15 points and six rebounds.

Muhammed Sabally scored 14 points and Jal Tharjiath grabbed seven rebounds, four coming on the offensive end. The T-birds (8-1) won the battle of the boards 25-21, including a 13-9 advantage on the offensive side, leading to second-chance points and trips to the line.

With East nursing a 46-44 lead late in the third quarter, Sabally scored and freshman Braeden Speakman converted a fastbreak layup to provide some cushion. In the fourth quarter, Rushmeyer scored six straight points and Sulaiman swished a 3-pointer as the East lead swelled to 59-47.

The game was back and forth early before East started to create some distance. Xyo Velex drilled a 3-pointer to make it 33-22 and the T-birds looked to take a 40-25 lead into halftime but made a turnover with only a few seconds on the clock. Just enough time for a Hail Mary heave.

Duey Cook delivered, draining a halfcourt 3-pointer that sparked the Eagles in the second half.

West’s Julius Adlawan took over the third quarter, pumping in 13 of his team’s first 17 points. He finished with a game-high 27 points. He converted an inside move thanks to great footwork to get West within 46-44. It was a theme for him as he showcased a variety of post moves.

Later, WIllie Zamora and Aarion Alexander tried to bring the Eagles (4-3) back and combined for 13 straight points for their team. Alexander’s three-point play got West within 61-57 and Zamora’s 3-pointer made it 63-60.

East closed it out thanks to a Victor Meza drive and free throws by Sabally and Sulaiman.

Ya Ya Greer set the tone that carried the day for the Higley Knights of Gilbert, Arizona in a 69-53 victory over the Ronan Chiefs of Montana.

Greer, a NCAA Division I surefire signee, scored the first six points in about a minute and then added off two assists later in the first quarter, the second one setting up a Donovan Dabney 3-pointer that pushed the lead to 17-6.

Greer finished with 13 points, six rebounds, five steals and three assists. Dabney added 13 points and went 3-of-5 from 3-point land. Greer is quicker than quick, and tough; a 5-foot-10 playmaker who plays with serious intent. Dabney’s jumper is wet. He splashed his jumpers, without ever touching the net. 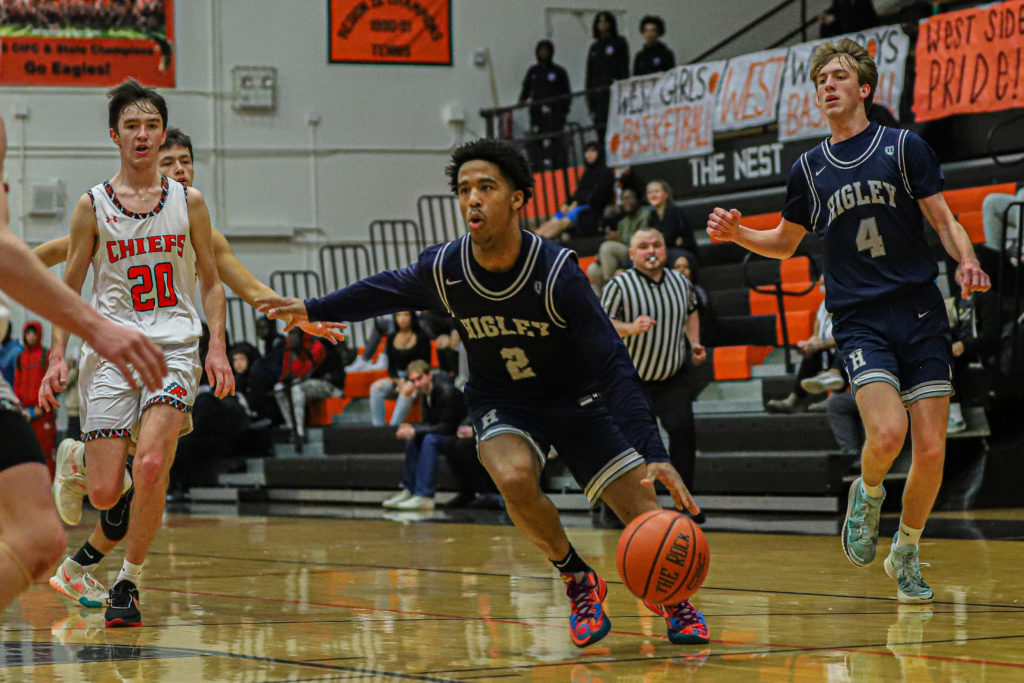 Just a freshman, Noah Gloor scored 15 points, many coming late as the Knights sealed the deal to finish 2-1 in the tournament.

One of the cool parts of the Alaska Airlines Classic is how the tournament pits schools which otherwise would probably never face off. Both Higley and Ronan traveled more than 2,500 miles to reach Anchorage.

Ronan didn’t back down from the challenge, winning the battle of the boards 33-32. Ted Coffman III led the team with 16 points while Marlo Tonasket Jr. added 11 and Josiah Misa had 10 points. Tonasket showed off a beautiful turnaround jumper in the first quarter and Misa showed toughness, taking a charge and taking the ball to the rack.

The Chiefs played hard, and with class. Often throughout the three days you saw Ronan players help up fallen opponents. Or take Coffman, who was willing to give a Higley player a high five at the free-throw line after a teammate left him hanging.

JJ Parker scored 19 of his game-high 25 points in the first half to help the Ketchikan Kings claim a 70-53 victory over the Metlakatla Chiefs.

These teams are located just 25 miles apart and flew more than 1,100 miles (about the distance from Florida to New York City) to play in Anchorage.

Ketchikan’s Andrew Kleinschmidt added 16 points, with 12 coming in the third quarter. Marcus Stockhausen scored nine points with a trio of 3-pointers and finished 11-of-25 from deep in the tournament.

This was Ketchikan’s second Classic win since 2019. Parker was the man early and often, pumping in 15 of his team’s first 21 points including a string of 13 in a row. He was in attack mode from the jump and made 11-of-14 shots inside the arc.

Metlakatla was led by Cameron Gaube’s 12 points. Mason Rolando hit back-to-back 3-pointers to tie the game at 19 before Ketchikan answered with 13-0 run, highlighted by two triples by Jack Zink. Jayden Buhler also drained a logo 3-pointer as the Cheifs canned 9-of-20 shots from downtown.