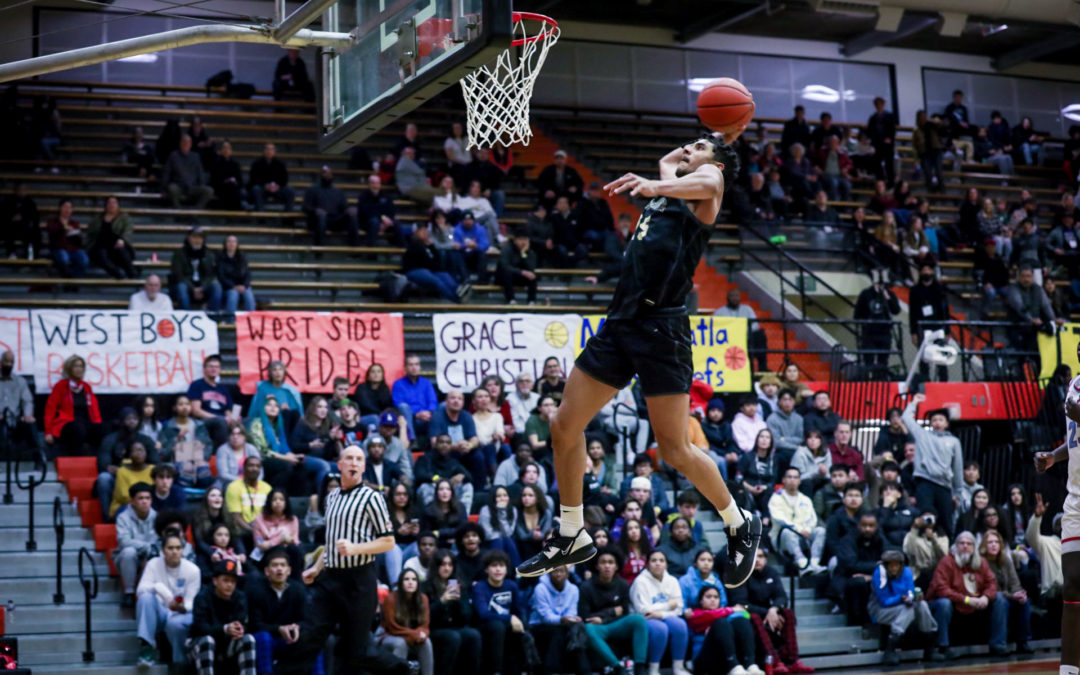 Luke Lentfer grew up with the Alaska Airlines Classic in his bloodlines as his father Jeff was one of the tournament’s greatest players back in the early 1990s.

Luke cemented his own Classic legacy after leading the Grace Christian Grizzlies past the West Eagles 58-53 in a back-and-forth semifinal game played before a crowd of more than 2,500 at West High.

Lentfer had a hand in eight of his team’s final 11 points as Grace hung on to advance to the Classic title game for the first time and will face Heritage Christian of California on Saturday night.

The Grizzlies got there thanks to the Lentfer cousins, with Luke scoring a game-high 19 points and Sloan putting up a 17-point, 14-rebound double-double. Luke set up Sloan for a post bucket that put Grace ahead 54-51 and on the next possession finished off a pretty give-and-go with Kellen Jedlicka to make it 56-51 and put his team in the driver’s seat.

Grace (10-2) got all its scoring from four players, including a dozen from Jedlicka and 10 from Joshua Ivanoff. Ivanoff is a legendary name in the Alaska basketball community, and he lived up to his name, converting an and-1 in the first quarter and swishing a pair of 3-pointers in the third quarter when the Grizzles struggled to get in gear.

Credit West. The Eagles (4-2) stood toe-to-toe with the Grizzlies in a first half that featured eight lead changes. Jedlicka at one point scored seven straight points as Grace built a 22-15 lead. The Eagles clawed back behind Duey Cook, Aarion Alexander and Boub Marial, who combined for 13 points in a second-quarter spurt that saw them take a 29-28 lead at halftime.

The final play of the half saw Marial fake a 3-pointer and drive all the way to the cup for the hoop and the harm. The three-point play came with just 1.2 seconds on the clock.

In the third quarter, West’s Willie Zamora went nuts. He hit back-to-back 3-pointers, fed Julius Adlawan for a two-handed dunk and then scored on a left-handed finish. It led to West taking a 40-34 lead.

That’s when the Lentfer boys took over. Sloan was strong in the post, with the 6-foot-7 senior using his size and skill to dominate play inside the paint. He bookended a 10-0 run, starting with an offensive putback and finishing off a layup on the other side.

When Jedlicka banked in a jumper, you started to think that maybe this was Grace’s night.

For Luke Lentfer, it had to be a good feeling for the reigning Class 3A player of the year. Last week, his cousin was named MVP of the Alaska Prep Shootout.

Tonight, he led his team into the championship game of the Alaska Airlines Classic, a tournament that his dad Jeff still ranks fourth in tournament history with 39 rebounds in 1990 for the Service Cougars.

Jeff went on to play at Weber State and in 1995 was on the team that as a 14th seed beat Tom Izzo and Michigan State in the first round of the NCAA Tournament. Now his son will face a team in Saturday’s Classic title game that is stacked with college-ready stars that has the same David vs. Goliath feeling.

Too much Tae. As in Tae Simmons, who led the Heritage Christian Warriors out of Northridge, California to a commanding 50-35 victory over the previously undefeated East Anchorage T-birds in the other Classic semifinal.

The 6-foot-6 sophomore was sensational with a 26-point, 13-rebound performance that lifted the Los Angeles area team to Saturday’s tournament championship game against Grace Christian of Anchorage.

Even though the highflying Warriors were grounded for most of the night against East, Simmons and fellow skywalker Seven Bahati had monster mash dunks. But Heritage also missed two dunks.

Still, this team is more than just style points.

The Warriors (15-6) grind up opponents defensively, with all five players moving like one heartbeat. They all switch seamlessly and put every ballhandler under stress that leaves the other team’s offense in a mess. 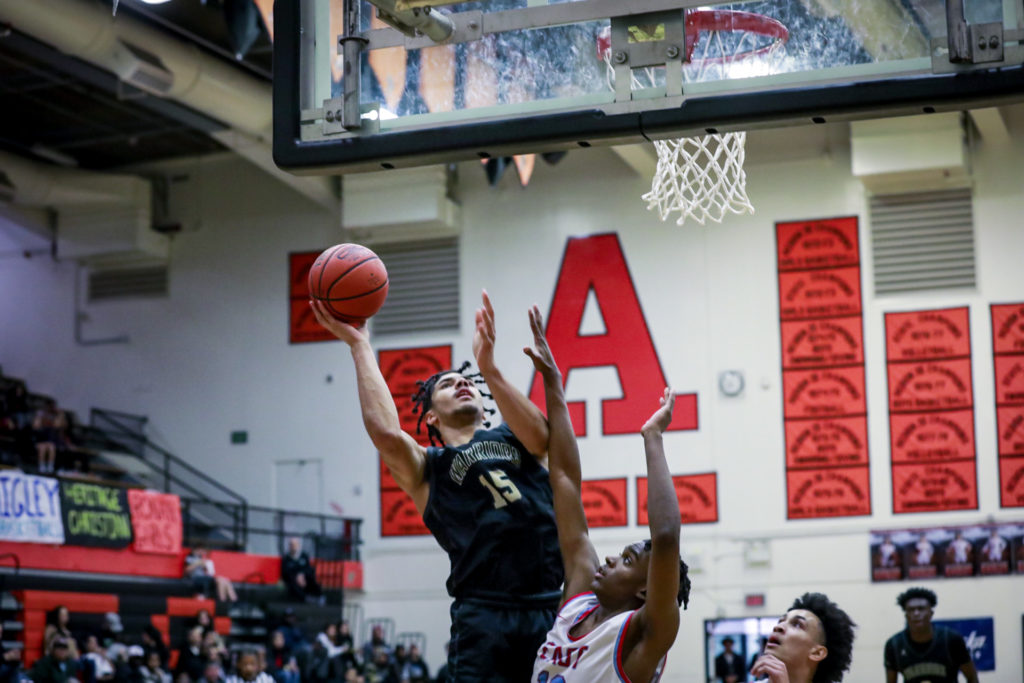 The T-birds committed 15 turnovers and made only 14-of-44 shots from the field. They made just 4-of-21 3-pointers, often taking a quick long-range shot because there was daylight. It seemed like everything inside the arc was tough sledding with Heritage’s length and strength. They challenged every pass, pushing East out farther and farther.

Meanwhile, the offense revolved around Simmons. Or maybe it just seemed like that. The fabulous forward, a 15-year-old who looks like a college player, was like a magnet with the ball. The Warriors did a nice job getting their star the ball in position to score, which he did almost at will.

Simmons netted nine of his team’s first 19 points, all coming at point-blank range on drives and rebounds. He wasn’t finished. Simmons crashed the boards and attacked the rim, leading to free throws and extra-chance points. When he knocked down an elbow jumper, it was like, this kid’s the total package.

Despite all of that, East (7-1) hung tough. Deshawn Rushmeyer and Axel Carpio came to play and were the only two T-birds who found any rhythm on offense.

Rushmeyer scored 11 points on 5-of-9 shooting. He was slashing, shooting and did not wilt under the bright lights of the Alaska Airlines Classic and a crowd of more than 2,000. The senior played key minutes in last year’s tournament and helped East reach the title game against another California power, St. Josephs of Santa Maria.

Carpio scored 10 points and hit a pair of 3-pointers, his second coming early in the third quarter that pulled East within 32-19. Moments later, Akeem Sulaiman got free for a two-handed flush. Seconds later, he was whistled for his fourth personal foul and took a seat on the bench.

One of the heroes that helped East reach the title game, Muhammed Sabally, was limited to just five points because he was shadowed by Bahati, a 6-foot-4 defensive wiz who picked up Sabally full court and held the T-bird all-star to 1-of-9 shooting.

Victor Meza’s 3-pointer late in the fourth quarter pulled East as close a 42-31, but too much Simmons (he had breakaway one-handed slam) and too much Giovanni Goree (14 points) down the stretch helped Heritage seal the deal. Goree, the state’s reigning Division III player of the year, is a dynamic floor general who killed East by executing drives and shooting 7-for-11.

The T-birds will face archrival West Anchorage in Saturday’s third-place game in a matchup between two of the best teams in the Cook Inlet Conference.

Jordan Irving’s putback inside the final minute proved to be the difference for the Higley Knights of Gilbert, Arizona as they held off Ketchikan 63-60 in a Classic consolation game.

Higley advanced to Saturday’s fourth-place game and will face the Ronan Chiefs of Montana.

The loss spoiled a sensational performance by the 1-2 punch of Marcus Stockhausen and JJ Parker, who combined for 41 points.

Stockhausen scored 21 points and hit seven 3-pointers, one shy of the tournament record.

Parker cooked the Higley defense for 20 points and stood toe-to-toe with Ya Ya Greer, a NCAA Division I surefire signee being recruited by the likes of South Carolina State. 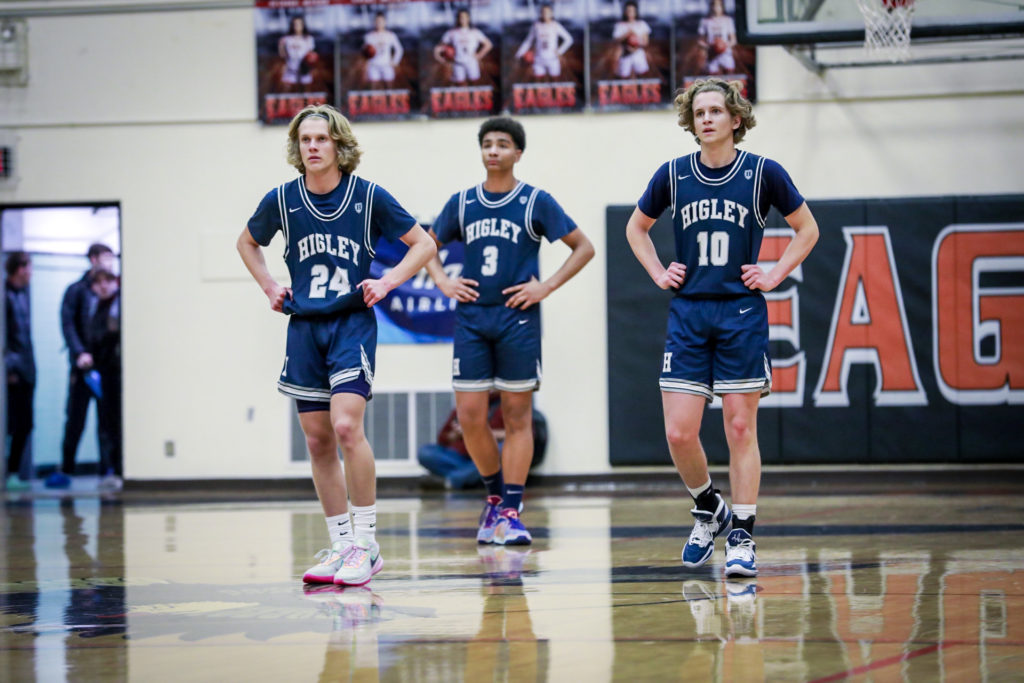 Greer collected 15 points, six steals, five rebounds and four assists and has a beautiful drive-and-kick game that gave his teammates a ton of open looks.  He’s also a slick ballhandler and him and Parker had their own game-within-the-game thing going.

Higley built a 32-25 halftime lead on the strength of Greer, a hard-to-guard senior who bagged seven of his team’s first 13 points and finished the first half with 10 points on 4-of-4 shooting.

Ketchikan trailed 22-11 when Stockhausen caught fire, dropping in 3-pointers on three consecutive possessions – bing, bang, boom. Then Parker scored on a beautiful baseline hesitation move to tie the game at 22.

That’s when Greer took over, feeding Dabney for a 3-pointer to get the Knights back on top. Moments later he went coast-to-coast as Higley’s lead swelled to 30-22.  Parker hit a 3-pointer to beat the halftime buzzer to help the Kings close within seven.

The Ronan Chiefs ended the game on a 10-0 run to rally for a 56-51 victory over the Metlakatla Chiefs in a in a Classic consolation game to become the first team from Montana to win a tournament game.

The team from Big Sky country needed a big-time rally to get it done.

Down 23-8 after the first quarter, they slowly worked their way back into the game. Marlo Tonasket Jr. scored seven points in about 90 seconds to get Ronan within 25-15. Later, Josiah Misa scored seven straight points to tie the game at 46.

The fourth quarter is when things got good.

Metlakatla was led by Cameron Gaube’s 18 points. He scored 13 of his team’s first 20 points, then had a flurry of free throws late to give his team a 49-46 lead. Troy Russell’s floater extended the lead to 51-46. 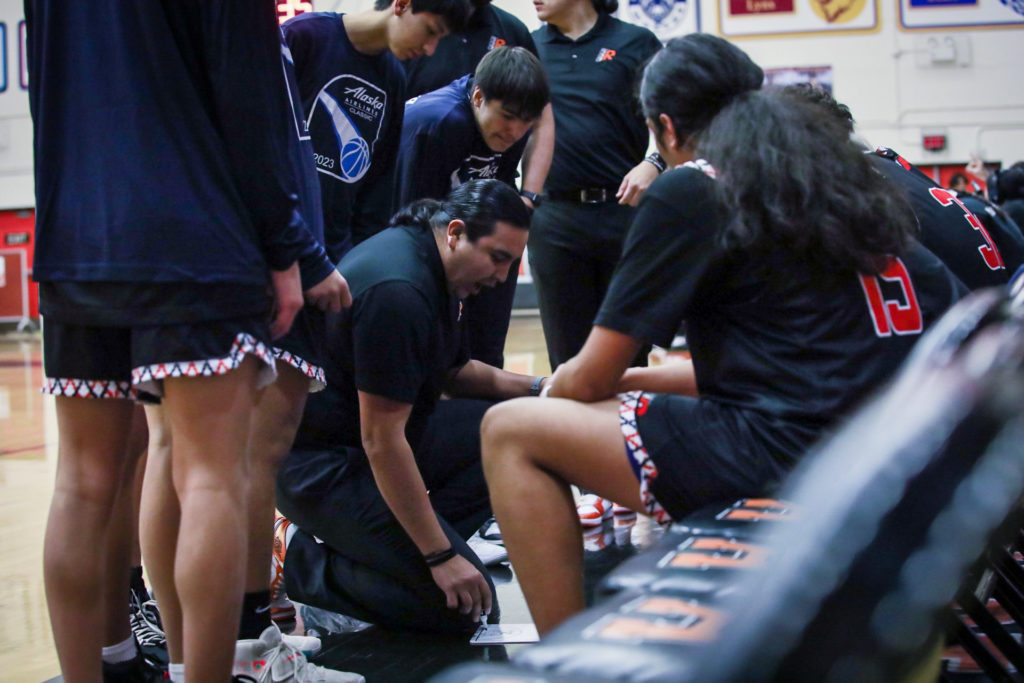 From that point, it was all Ronan. (6-6) Tonasket had a blocked shot – his sixth rejection in two games – that led to a layup from Jordan Gatch that pulled the Chiefs within one. Misa also took two charges.

Kolby Finley scored on a pretty feed from Coffman to give Ronan a 52-51 advantage, the first lead for the Montana team since a 6-4 lead early in the first quarter.