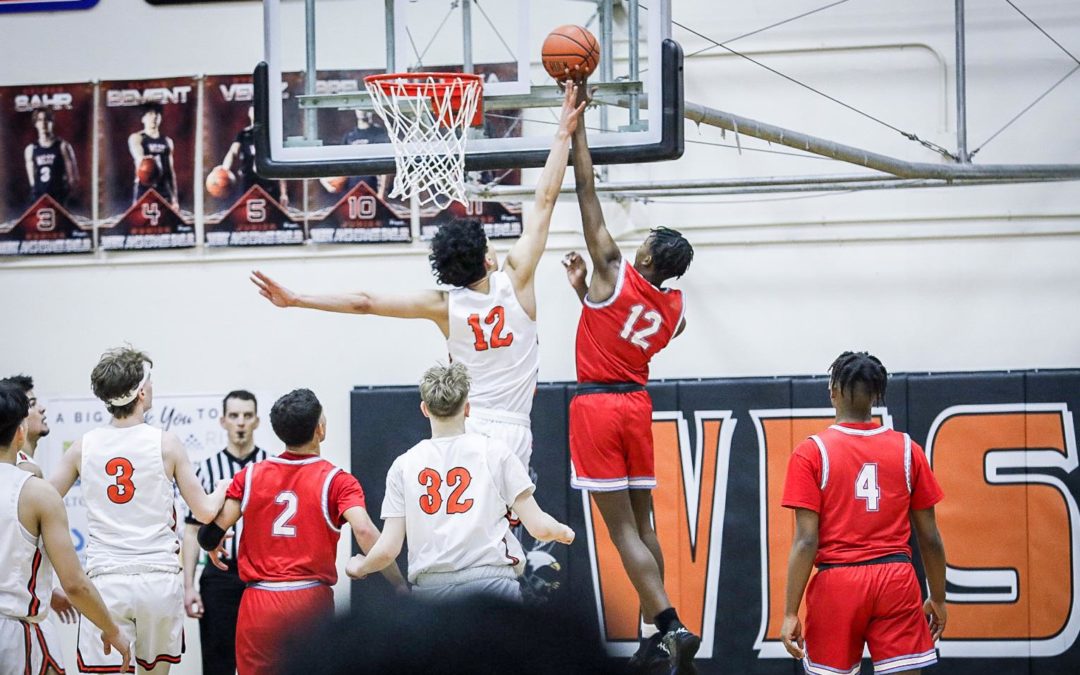 Heritage Christian sophomore Tae Simmons of Northridge, California is only 15 years old, but he’s already got the best nickname.

Simmons has been cleared for takeoff at the Alaska Airlines Classic, which tips off Thursday with four boys games at West High.

On a Heritage team stacked with college-ready talent, Simmons stands out by having the most dunks for the Warriors, a Division I power out of the Los Angeles area.

Simmons is averaging a double-double with 18 points and 11 rebounds per game for a Heritage squad that also features reigning Division III Player of the Year Giovanni Goree and emerging star Seven Bahati, a Donda Academy transfer who is averaging 18 points and shooting 52% on 3-pointers.

And we haven’t even mentioned 7-foot freshman Howie Wu or 6-foot-4 sophomore Dillan Shaw, the most improved player for the Warriors (13-6).

Heritage is a reigning four-time league champion that was ranked as high as No. 14 in the state of California earlier this season. The Warriors play in the same sectional as Bronny James and Mater Dei as well as a half dozen of the top 50 teams nationally.

They could go to any tournament in the country but opted to come to the Alaska Airlines Classic for the first time.

“The team is very excited about coming and very worried about how cold it might be. They think the sun doesn’t rise there during the winter,” Tait said with a laugh. “Needless to say, it will be an experience taking a bunch of LA kids to Alaska.”

The Higley Knights, a league-leading Class 5A team from Gilbert, Arizona, are also newcomers to the The Last Frontier.

“Ya Ya is our defensive catalyst,” said Higley coach Kenneth Drake. “What makes him effective is his timing and his ability to change directions defensively.”

The 5-foot-10 senior is also the team’s leading scorer at 17 points per game and being recruited by several NCAA Division I schools, including South Carolina State.

Tuff bucket but that ref was ZOOMING 💨 (via @YarellGreer) pic.twitter.com/P7dYhnGDgD

The Ronan Chiefs out of Montana are the third Outside team in the field. The Chiefs are led by brothers Marlo and Elijah Tonasket, who combined for 24 points a game last year.

The award-winning movie ‘Alaskan Nets’ focused on two cousins from Metlakatla, which is also part of the Classic and features a pair of all-state returners in 6-foot-4 senior Shayne Anderson and 5-foot-9 guard Cameron Gaube.

Ronan will face tournament host West Anchorage in the annual ‘Student Body Game’ in Thursday’s first round. The game is played at 12:15 p.m. in front of the entire West enrollment of 1,800 students, who pack the historic gymnasium.

West is led by a pair of all-conference returners in 5-foot-8 guard Willie Zamora and 6-foot-5 forward Julius Adlawan. 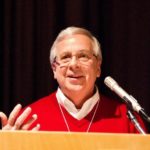 In 1992, Don Winchester’s idea of using a shot clock for a high school basketball tournament was radical. Now it’s clear he was ahead of his time.

Thirty years later, the shot clock is coming to the Alaska Airlines Classic and will be used for all 18 boys and girls games, thanks to Winchester, who pitched the idea to the tournament committee led by West Anchorage High principal Ja Dorris.

“Ja is fun to work with and he gets it,” Winchester said. “We need do things like this and he’s not afraid of that stuff because 30 years ago people were saying I was trying to change the game in Alaska.”

The National Federation of State High School Associations (NFHS) in 2022 opened the door for states to adopt a 35-second shot clock. All three Lower 48 schools here this week are from states – California, Arizona and Montana – that use one.

When it comes to The Last Frontier, the Alaska Airlines Classic will help modernize the game in the state as Alaska’s only high school tournament with a shot clock. 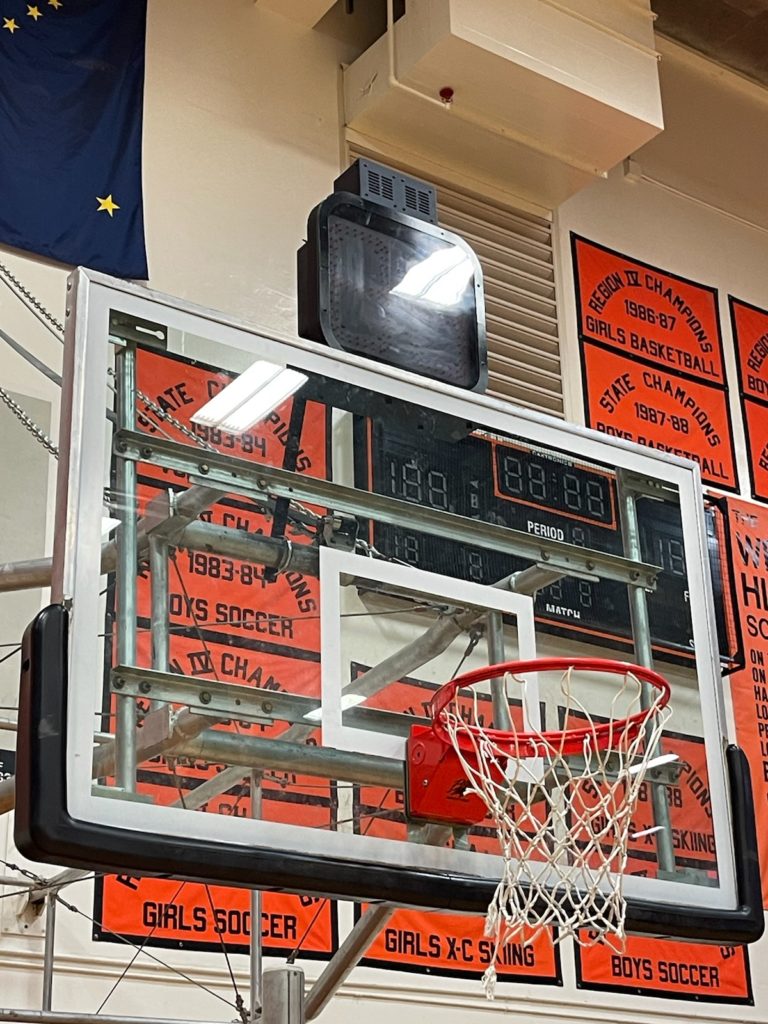 “I’m excited for it,” said Grace Christian coach Jason Boerger. “For our players it gives them a taste of what many other states are already doing and a bit of a preview for those who go on to play college.”

From 1992 to 1994, Winchester implemented a shot clock at the Classic girls tournament.

“The players loved it,” he said.

This is believed to be the first time a shot clock will be used for a boys game in Alaska.

Winchester was instrumental in its adoption this year and his experience behind the scenes will help ensure a seamless execution. Clock operators will be trained and there’s a backup plan if the clock malfunctions.

“We’ve got cards reading ‘20 seconds, 15 seconds, 10 seconds’ and so on. We’re gonna be prepared. We’re not going back,” he said. “We brought teams here to play with a shot clock and that’s what we’re going to do.” 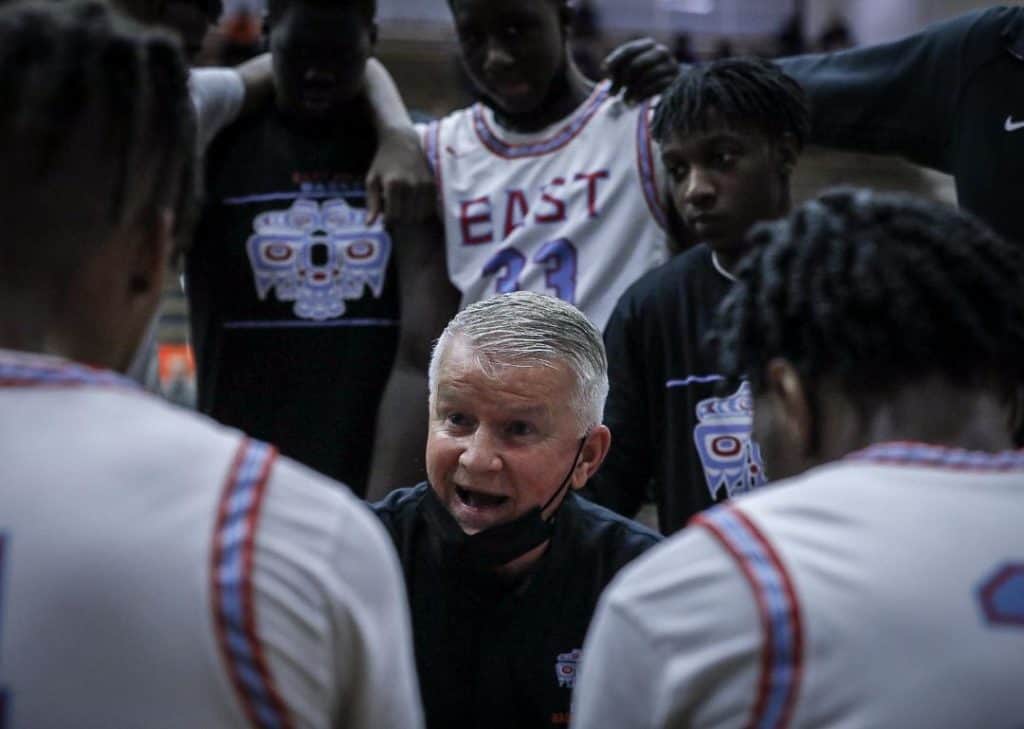 Chuck Martin talks to his players at the 2022 Alaska Airlines Classic. Photo by Grenel Sumabat

East Anchorage coach Chuck Martin hopes the shot clock catches on full-time in Alaska. He believes the shot clock is good for the game based on his college coaching experience – first at NCAA Division I Liberty and then at NAIA Masters College.

“You play different when there is a shot clock,” he said. “I think the majority of possessions will not be affected but teams will have to have a plan for late clock possessions and prepare for managing the clock late in a game whether ahead or behind.”

Dating back to the inaugural tournament in 1989, the Alaska Airlines Classic has a rich history that has produced amazing talent that’s unmatched by any other tournament in Alaska:

The Classic is a hallmark event for Rage City, where kings of the court are crowned and boys become men.

In 1991, East’s Trajan Langdon put his name on the national map with a larger-than-life performance in the final against seventh-ranked Oak Hill (VA).

In 2010, West’s Devon Bookert put his game into overdrive with a 29-point performance to lead the Eagles over Christian Life (TX) in the title game.

In 2016, West’s Da’Zhon Wyche put his name in the record book with a 49-point explosion against Planet Athlete (AZ) in the semifinals.

In 2020, Daishen Nix and Isaiah Moses put on a show in the championship game as Nix scored 21 points and won the title with Trinity (NV) while Moses bagged 42 and MVP honors for Dimond. 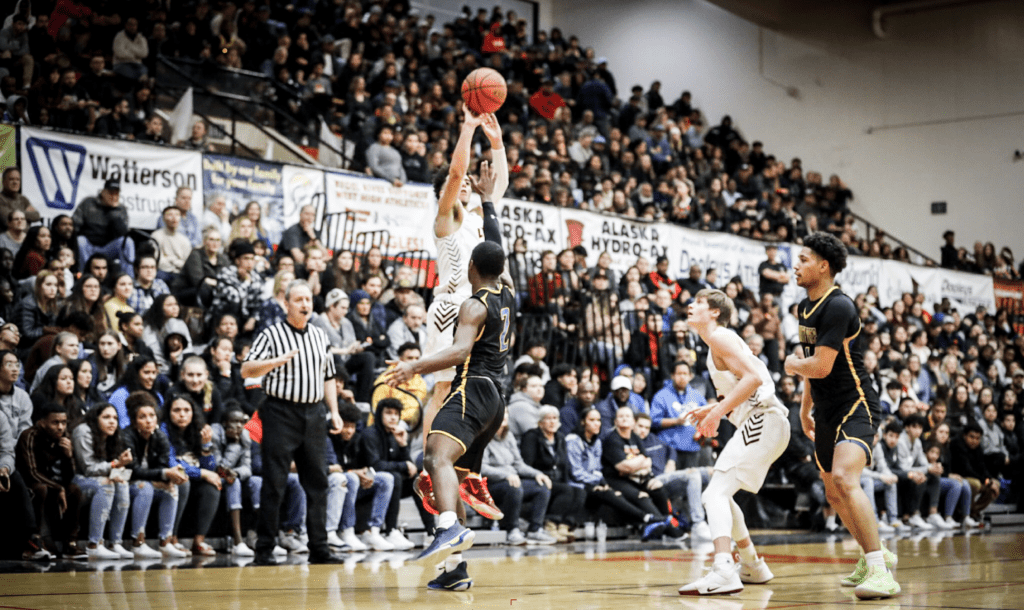 Four Alaska teams have won the Classic, including two coached by Hall of Famer Chuck White. Brad Lauwers also has a Classic title. The last Alaska team win it was Colony in 2019 behind Sullivan Menard, Patrick McMahon and coach Tom Berg.

Grace and East are two of Alaska’s hottest teams coming into the Classic and line up on opposite sides of the bracket.

The Grace Grizzlies (8-2) enter the tournament having just won the Alaska Prep Shootout last weekend with a 55-54 victory over top ranked Dimond in a thrilling championship game.

MVP Sloan Lentfer, a 6-foot-7 senior, scored 16 points and drained a pair of free throws to win the game in the final second after being fouled on essentially the final play.

In 1990, Luke’s father, Jeff Lentfer, set a then-tournament record with 39 rebounds in three Classic games for the Service Cougars. That total still ranks fourth today. The 6-foot-8 Lentfer – who went on to play at Weber State – grabbed 20 boards in one game, the second-highest single-game total in tournament history.

The undefeated East T-birds are flying high again under Martin, a former college coach at Liberty and Masters, who has posted a phenomenal 96-11 record at the school in this his fifth season as bench boss.

Grace and East met early in the season, just days before Christmas, with the T-birds winning 55-53.