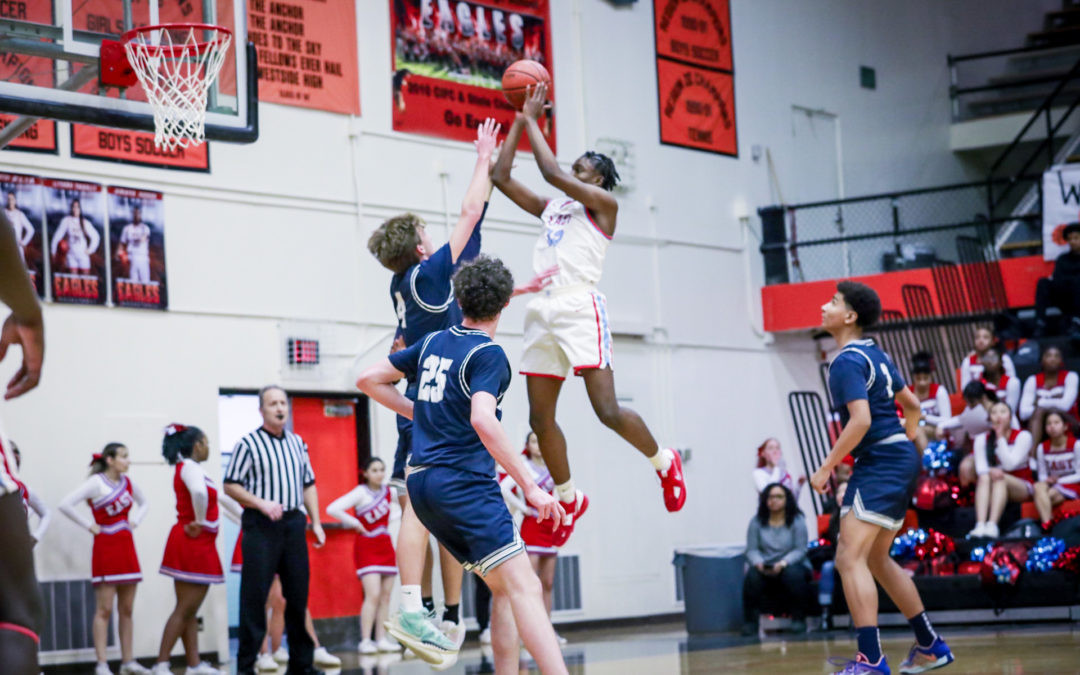 The East Anchorage T-birds dialed up the defense, blocking a dozen shots and holding the Higley Knights of Gilbert, Arizona to just eight points over the final eight minutes, to make history in winning 52-43 on Day 1 of the Alaska Airlines Classic at West High.

Not only did 6-foot-5 Akeen Sulaiman furnish a tournament record eight blocks, but the T-birds beat a Lower 48 team at the Classic for the first time since 2016 and coach Chuck Martin picked up his first Classic win over an Outside team since 1993.

Sulaiman stood tall in the post with nearly double-digit blocks and a game-high 13 rebounds to complement the offensive output from a trio of double-figure scorers. Muhammed Sabally led the way with 16 points, followed closely by Victor Meza with 15 and Axel Carpio with 14. Those three made 17 of the team’s 20 field goals.

East moved to 7-0 this season and advanced to Friday night’s Classic semifinals against high-flying Heritage Christian, one of the top teams from the state of California.

The T-birds got there thanks to a 19-4 run in the first half, capped by a Sabally layup and 3-pointer sequence that made it 23-11. The 6-foot-3 sophomore is the youngest starter for East, which lost five all-state starters from last season’s Class 4A state runner-up team.

Sabally filled those shoes by stepping up. He showcased an all-around game, knocking down 3-of-4 3-pointers and taking the ball to the rack. He also converted a pretty post move off glass.

He was big, Sulaiman was bigger. A key holdover from last year’s team, the junior looks more polished this season and cleaned the glass like a rim protector. These blocks weren’t cheapies, either; he chased down a ballhandler to erase a layup attempt and he even denied a dunk attempt.

Messed around, found out.

Still, the Knights of the Pheonix area kept coming, rising from the ashes to cut a 12-point deficit down to 36-35 on Ya Ya Greer’s free throw at the end of the third quarter.

The game was up for grabs in the fourth quarter and the T-birds swooped in and gained control as Meza and Sabally did all the scoring in a 10-4 run. When Carpio canned his fifth 3-pointer, the lead swelled to 51-39.

For the T-birds, this was their first Classic win over an Outside team since 2016, when they beat Pro Vision of Texas 65-62.

For Martin, this was his first Classic win over a Lower 48 team since 1993, when he led a Colony Knights squad that knocked off Lexington Catholic of Kentucky 68-65.

Martin had left the state for more than a decade for the college ranks before coming back and soon after taking over at East, where he has gone 97-11 in five seasons.

The West Anchorage Eagles made it rain by draining a dozen 3-pointers to propel a 65-45 victory against the Ronan Chiefs of Montana.

This was the first time West had knocked off a Lower 48 team in the tournament since 2018, when the Eagles beat Planet Athlete of Arizona 74-70 in coach Josh Muehlenkamp’s second season.

Boub Marial and Duey Cook each reached double figures, and the Eagles shot the lights out from downtown, drilling 12-of-26 shots from 3-point land.

Marial scored 12 of West’s first 33 points to lead an early game surge that set the tone for the rest of the way. He finished with 14 points.

Cook chipped in 11 points on 5-of-8 shooting, including a 3-pointer to beat the second-quarter buzzer and send the Eagles into halftime with a commanding 38-22 advantage.

West’s Willie Zamora scored nine points on 3-of-5 shooting from deep. Zamora, Aarion Alexander, Dean Laxa and Marial helped the Eagles drop in five 3s in the first quarter, much to the delight of the ‘Student Body Game’ crowd as the game was played in front of West’s entire 1,800 enrollment.

It was a scene. The band was on hand, along with about 30 cheerleaders. At halftime, there were performances by a cheer team, a school dance team and a two-man JROTC precision drill team.

West’s 6-foot-4 Mat Choul gave the home fans something to cheer about after he threw down a one-handed jam early in the third quarter as West’s lead had swelled to 45-24.

Ronan wasn’t overmatched so much as overwhelmed as the players made several silly turnovers and missed shots you know they normally make. The Classic is a big stage, and the jitters were there. But so were the effort and energy.

Laurance Lozeau led Ronan with 15 points thanks in part to 3-of-3 shooting from 3-point land. Lozeau knocked down two triples in the first quarter, with the second one pulling Ronan within 23-12. But that was as close as the Chiefs got as West put its foot down, building the lead to as many as 26 points.

Both teams will be in action again on Friday. West advanced to the late semifinal against the Grace Christian/Metlakatla winner while Ronan will face the loser in the early consolation game.

For as good as the Heritage Christian Warriors of Northridge, California looked on offense, they were devastatingly handsome on defense. If looks could kill type pretty.

Heritage executed a deadly defensive effort that sucked the life out of the Ketchikan Kings on its way to posting a 66-17 blowout victory.

Seven Bahati and Tae Simmons provided much of the offense – and highlights.

Bahati, a 6-foot-4 high riser, scored 20 points, grabbed seven rebounds and made four steals. The first dunk came in the first minute of the game and the second one was a two-handed tomahawk that made it 37-10 and put an exclamation point on the tale of two teams.

Simmons, a 15-year-old 6-foot-6 man child, cashed in for 15 points, nine rebounds and a two-handed rim rattler early in the third quarter. On one play, he picked off a pass like a defensive back and dribbled coast-to-coast before skying in for a layup.

Heritage looked like a track team the way its players pushed the ball up the court, moving with speed and precision. The Warriors (14-6) shot 54 percent from the field and made 5-of-12 3-pointers, including Delan Grant’s triple to beat the buzzer and make the score 40-10 at halftime.

The Californians, it seemed, could do anything. The only thing that slowed them down was a running clock used in the fourth quarter as the game reached the mercy rule.

Ketchikan was outmatched, sure, but they don’t make teams in Alaska like Heritage. You can’t prepare for that type of awesome athleticism.

The game had shades of Oak Hill-Juneau at the 1991 Classic. That Oak Hill team featured future NBA player Jeff McInnis and a host of NCAA Division I signees. Heritage gives off the same vibe.

If the Ketchikan players ever wondered what it would be like to face their shadow, they found out against Heritage. The Warriors stuck to the Kings like glue, making it difficult to pass the ball, let alone shoot it.

When Marcus Stockhausen swished a 3-pointer to make it 24-8 it came off a series of beautiful passes. Ketchikan moves the ball well but looked stuck in mud against this California team.

The Kings never quit. They never stopped trying to make things happen. Even down 65-16, you had Stockhausen diving on the court for a loose ball. JJ Parker is a nice player who led the team in scoring with seven points. Jonathan Scoblic made his team’s only free throw at the buzzer.

Sloan Lentfer picked up where he left off from last weekend and picked up a double-double as well to lead the Grace Christian Grizzlies into the semifinals with a 63-37 victory over Metlakatla.

Kellen Jedlicka scored 18 points for the winners and Luke Lentfer added 10 points. Jedlicka and Lentfer combined for 13 rebounds to help the Grizzlies win the battle of the boards 32-17.

Ten different players scored for Metlakatla, led by TJ Jackson and Aaron O’Brien, who each had a half dozen. Tory Russell made his team’s only two free-throw attempts.