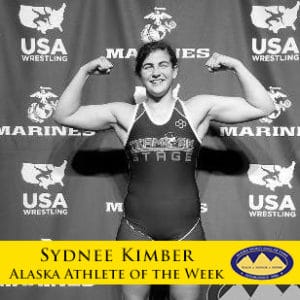 The All-American junior at McKendree University  was so dominant during the event that nobody scored a point off her in four matches. Kimber won the 191-pound championship after pinning each of her four opponents in the first round. She finished the season 17-0 in becoming a back-to-back national champion.

The Mt. Edgecumbe High graduate will advance to next month’s Olympic Trials.

The Alaska Sports Hall of Fame Alaska Athlete of the Week is selected by a panel each Friday and announced publicly Monday morning on our Facebook page.