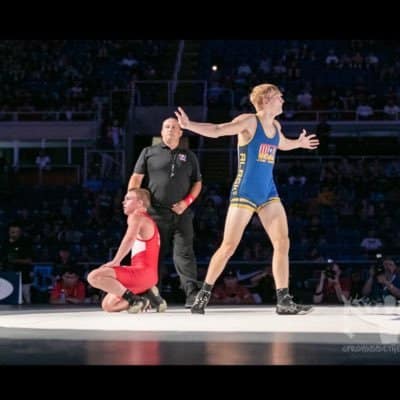 Jeremy Bockert of Fairbanks threw his weight around at the USA Wrestling Junior Greco-Roman National Championships in Fargo, North Dakota.

He threw his opponents around as well.

The Greco specialist clinched the 126-pound championship in impression fashion, racking up a handful of five-point moves and trouncing Iowa’s Gable Porter 11-1 in the final.

Bockert earned his first national championship and was selected Outstanding Wrestler for the tournament.

The Alaskan’s performance in the title match was nothing short of sensational. He showcased power and precision to win by technical fall.

First, Bockert scored two takedowns and executed a head-and-arm move to build a 6-1 lead. Then he put the match away by lifting Gable and throwing him to the mat for a phenomenal five-point play that sealed the deal in just 81 seconds.

“I had at least five 5s this tournament,” he told reporters.

Team Alaska's Jeremy Bockert takes flight in his Fargo final and is your champion at 126. pic.twitter.com/z4mMHWRW5F

Bockert was the lone Alaska wrestler in the finals at Junior Nationals. In 2019, he placed third at this tournament.

The recent Lathrop High grad was a two-time state champion. He trains with the Interior Grappling Academy and credited the club for helping prepare him for Junior Nationals.

“Fairbanks IGA, we’re on the come up,” he said. “Greco is going to get better. We train almost every single day.”

Bockert has already built quite a wrestling resume. He’s a three-time Greco All-American and placed second in 2019 Western Junior Regionals in Greco and fourth in freestyle.

He comes from a wrestling family and wants to follow in his father’s footsteps.

“My dad, he’s always talking about Greco. He used to wrestle,” Bockert said. “He was up at WCAP (World Class Athlete Program) for a little bit. He had his time there.

“I’m hoping in the late future I can get there.”