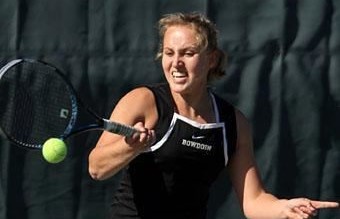 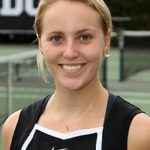 Anchorage tennis player Emma Lewis made her name in doubles at Bowdoin College, but her claim to fame came in singles.

In 2012, she rallied for a thrilling three-set victory in the decisive match to lift Bowdoin to a 5-4 win over Middlebury in the NCAA D3 national tournament.

She lost to Faber at No. 1 doubles earlier in the day, but came through when it mattered most to help Bowdoin reach the elite eight for just the second time in school history.

Lewis also came up clutch in 2014 when her win at No. 1 doubles helped propel Bowdoin to a 5-2 win over Middlebury to get the Polar Bears back to the elite eight.

A hard-hitting ball machine with power and precision, Lewis became the first college player from Alaska to reach 100 career wins in singles and doubles.

She finished her career with 125 wins, the second-most for an Alaskan at the college level.

Her 2014 senior season was something special as she posted a 24-7 singles record; her 24 wins rank No. 2 on the school’s all-time list.