CIC Football: Juneau’s Jamal Johnson runs for 337 yards in 42-13 win over Colony in battle of unbeatens 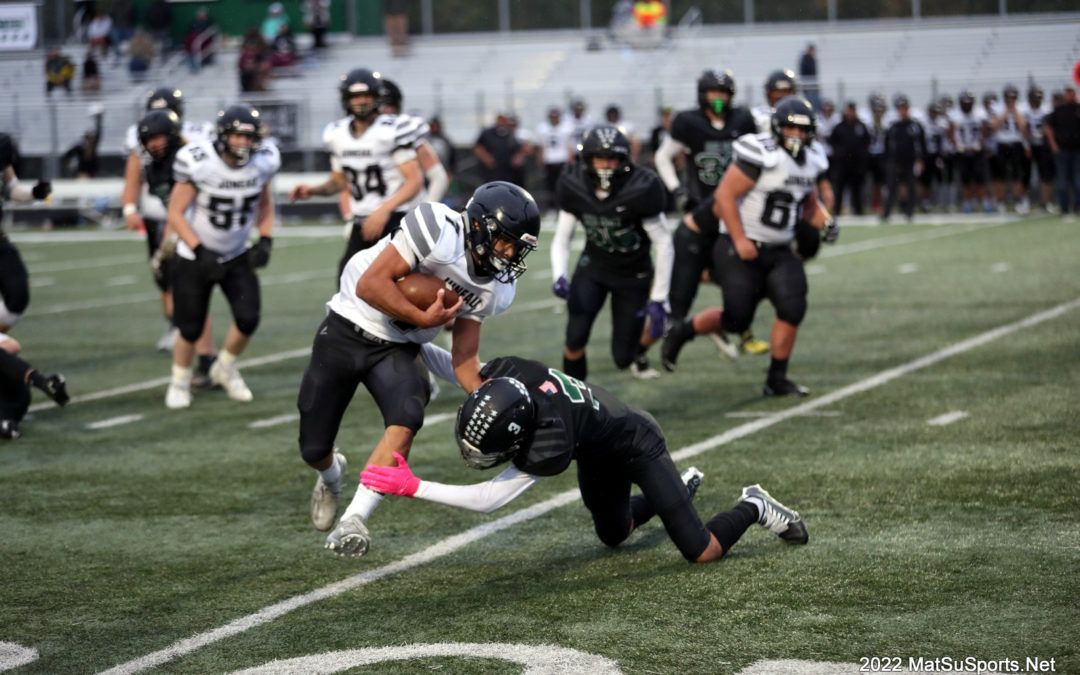 Juneau’s Jamal Johnson put the Colony defense in a meat grinder Friday night, chewing up the Knights for 337 rushing yards in a 42-13 victory in the Valley.

He carried the ball 25 times and scored three touchdowns on runs of 45, 7 and 59 yards. He broke off another big run of 62 yards to rush for the most yards by a Juneau player in 17 years.

The 5-foot-8, 183-pound running back plays with an attacking style that wears down a defense, making him seem bigger than he is.

“He plays like a giant and we love having him on our team,” said Juneau head coach Rich Sjoroos.

Johnson got going in the second quarter with two TD runs, including a fabulous 45-yarder up the middle after twisting away from several would-be tacklers and breaking away. His 59-yard TD run in the third quarter was a thing of beauty as he followed a string of blocks to go untouched. 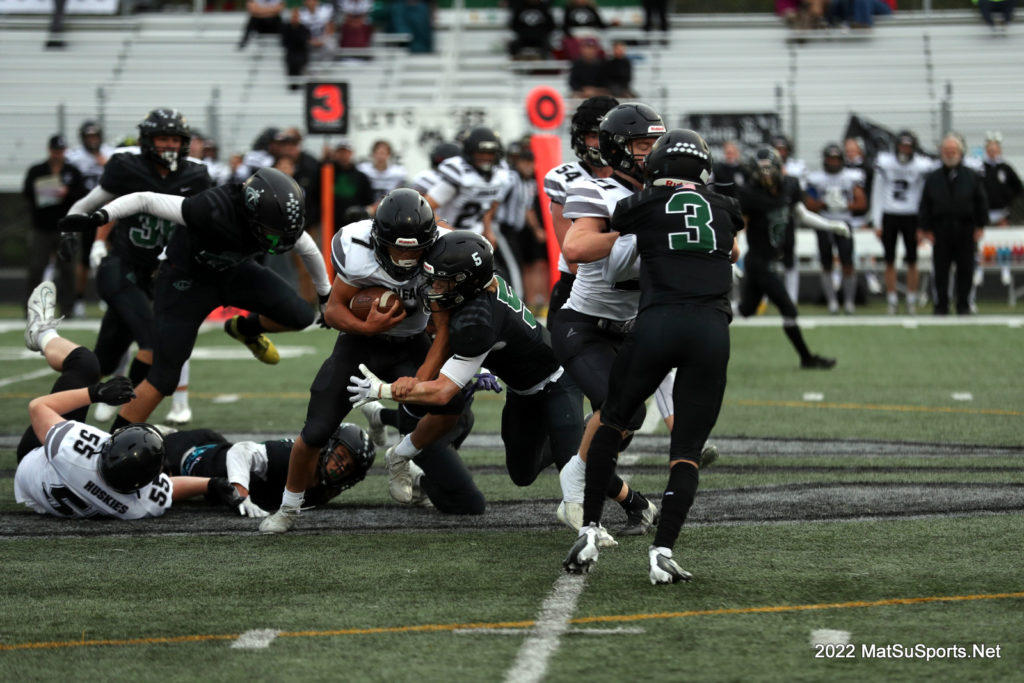 But his best run of the night came on a 62-yard run in the fourth quarter during which he broke five tackles and stayed on his feet even when it looked like he would go down.

“First contact he really knows how to break through that and just gets that motor going,” Sjoroos said. “The team feeds off that. I was, like, flexing on the sideline. I was getting pumped up. This kid is something else.”

Johnson’s 337 yards are the most for a Juneau player since Tres Saldivar’s school-record 351 yards against Palmer in 2005. Saldivar was a 5-foot-9, 172-pound shake-and-bake speedster whereas Johnson is more ground-and-pound.

This Week 4 contest pitted two unbeatens in the Cook Inlet Conference. It was homecoming for Colony and the Knights gave the big crowd lots to cheer about early in the first half.

On the tenth play of the game, Colony all-star Jayce Underwood scored on a beautiful 72-yard punt return, zigging to the left before zagging right and outrunning the coverage down the sideline to make it 7-0 at the 8:23 mark. 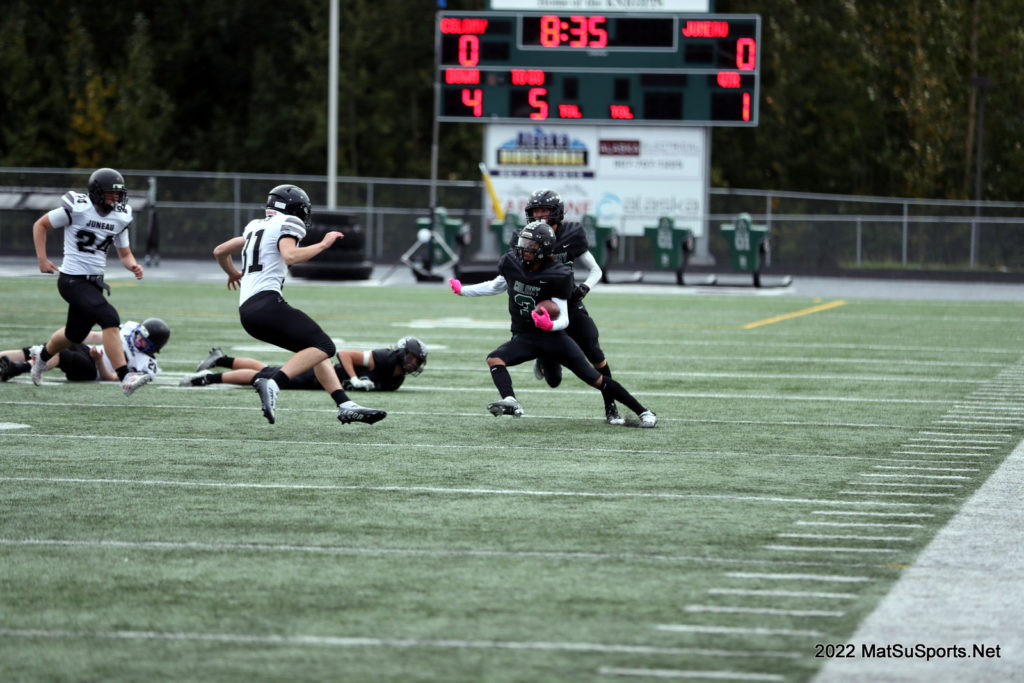 Colony’s defense got a stop and then recovered a fumble, setting up a 60-yard, 8-play drive capped by Jack Nash’s 1-yard TD plunge that made it 13-0. The scoring drive was also aided by Nash’s 30-yard pass play to Cole Hamilton.

On Juneau’s next drive, the Huskies marched 84 yards down the field and pulled within 13-8 after Johnson scored and quarterback Jarrell Williams added a two-point conversion after a penalty moved the ball closer to the end zone.

Williams, a first-year signal caller, orchestrated another scoring drive the next time Juneau got the ball. This time he led an 82-yard drive, keyed by a 66-yard pass completion to MJ Tupou and capped by his 5-yard TD run.

Johnson’s second TD gave the Huskies a 21-13 advantage at halftime.

“I thought we did a good job of settling down” Sjoroos said. “The kids did a great job obviously for the rest of the game.”

Williams scored again on a 7-yard run in the third quarter and finished with 184 total yards – 94 on the ground and 90 through the air.

His only mistake of the game came on a red-zone interception in the third quarter when Nash picked off a pass in the corner of the end zone. It was the Colony defensive back’s seventh pick in the last three games. 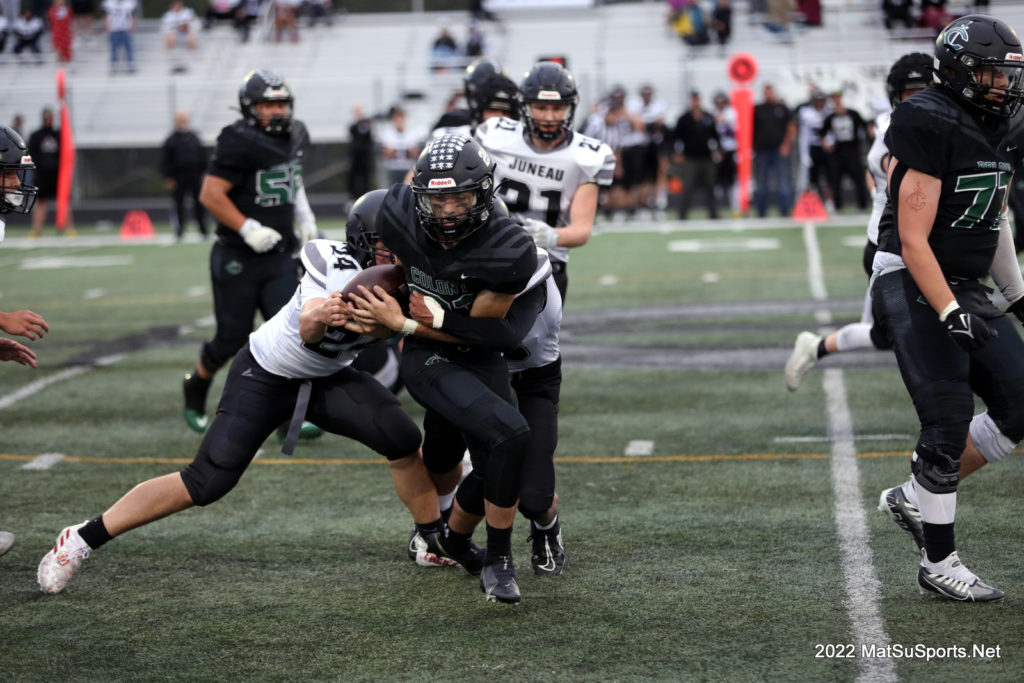 Nash, who doubles as Colony’s quarterback, racked up 85 yards rushing before he suffered a leg injury late in the fourth quarter and had to be helped off the field.

The unsung hero in Juneau’s single-wing offense was center Marcus Underwood. Not only did he anchor an offensive line that paved the way for 471 yards on the ground, but his accurate snaps to Williams and Johnson allowed the offense to run smoothly.

“He’s a first-year center,” Sjoroos said of Underwood. “We’ve tried many different kids and had some challenges there this year. That was by far his best game. The snap is very important to any offense, but especially ours.”