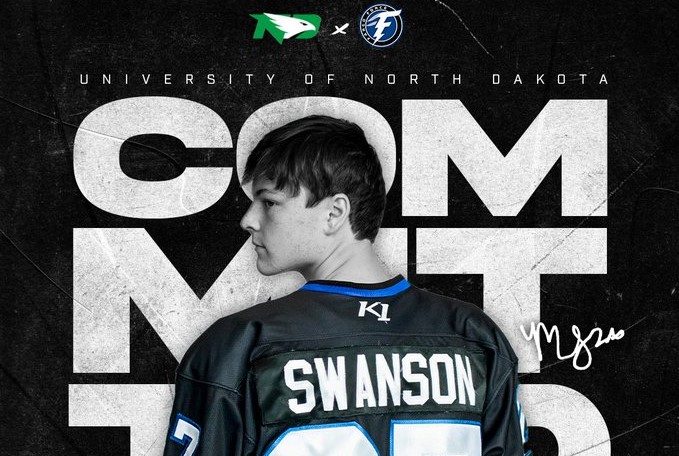 Anchorage’s Mac Swanson, crushing his first year of juniors for the Fargo (N.D.) Force of the U.S. Hockey League, won’t have to go far to play college hockey – just 80 miles up I-29 to Grand Forks.

Swanson, 16, recently confirmed his oral commitment to the University of North Dakota, a perennial Division I power that plays in the National Collegiate Hockey Conference.

Swanson is the highest-scoring player in the USHL among those born in 2006 and is tied for 10th in scoring on America’s best junior circuit. He extended his point streak to five games with a goal Wednesday in Fargo’s 4-3 overtime win against the Sioux Falls (S.D.) Stampede. Swanson has scored at least one goal in four straight games.

Swanson, a high school junior, will make it a hat trick of Swanson kids to play college hockey. Older sister Addie is a forward at Division III Plymouth State and Sydney, the middle child, plays at Division III Nazareth. The kids’ parents were Division I athletes – Brian, the former NHLer, was an All-American and Hobey Baker finalist at Colorado College, and Lynn played soccer at Creighton.

Congratulations to Force forward Mac Swanson on his commitment to play D1 College Hockey at the University of North Dakota!#ForceNation⚡️ | #StarsRise pic.twitter.com/RxrVGmqGaF

Swanson, a natural center who plays left wing on Fargo’s top line, would become the first Alaskan to play at North Dakota since winger Evan Trupp of Anchorage, who skated there from 2007-11. Trupp helped the Alaska Aces of the ECHL win the 2014 Kelly Cup and currently is the first-year head coach of the Anchorage Wolverines of the North American Hockey League.

Swanson’s linemate in Fargo is right wing Bret Link of Anchorage, who is committed to Colorado College. Link had an assist Wednesday to give him totals identical to Swanson – 7-11—18 in 16 games – and stretch his point streak to four games. He’s 4-2—6 and plus-8 in that span. Link’s plus-18 rating overall ranks second in the league.

In pro action Wednesday, former NHL goaltender Pheonix Copley of North Pole backstopped the American Hockey League’s Ontario Reign to a 5-1 win over visiting San Jose. Copley stopped 21 shots for his second straight win after a three-game losing streak (0-2-1). Copley is 6-3-1 with a 2.52 goals-against average and .910 save percentage. Longtime NHL center Nate Thompson of Anchorage furnished an assist for Ontario and is 1-3—4 in 11 games, with an even plus-minus rating.

In the ECHL Wednesday, Alec Butcher, the former UAA forward from Anchorage, chipped in an assist for the Reading Royals in a 5-3 road loss to the Maine Mariners. Butcher owns 2-3—5 totals and a plus-1 rating in 13 games.