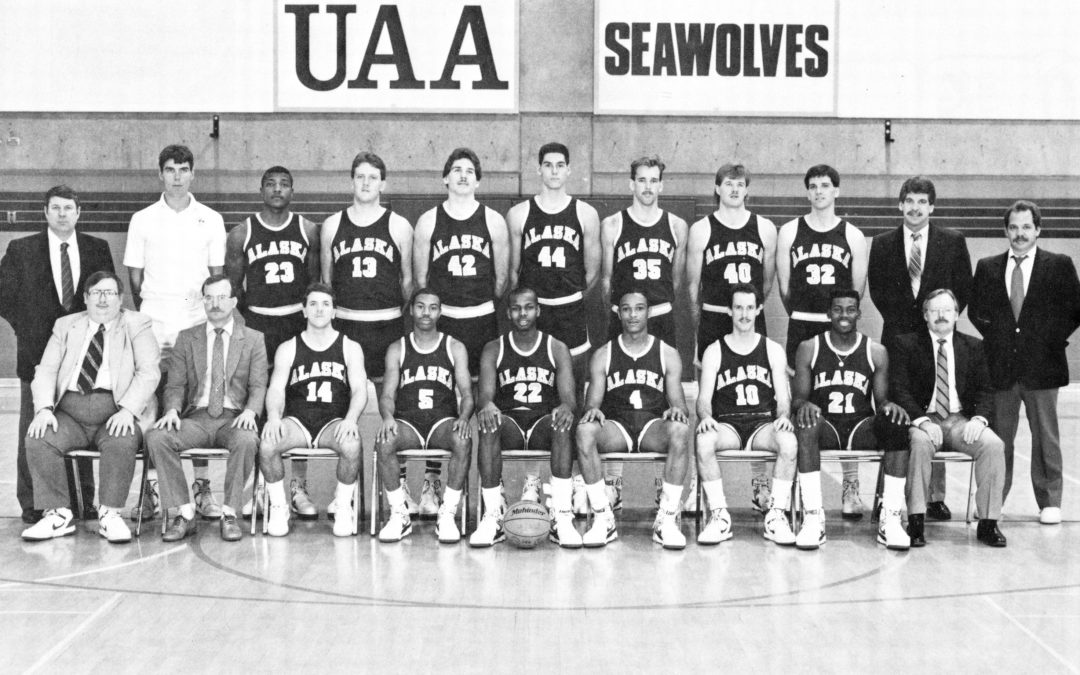 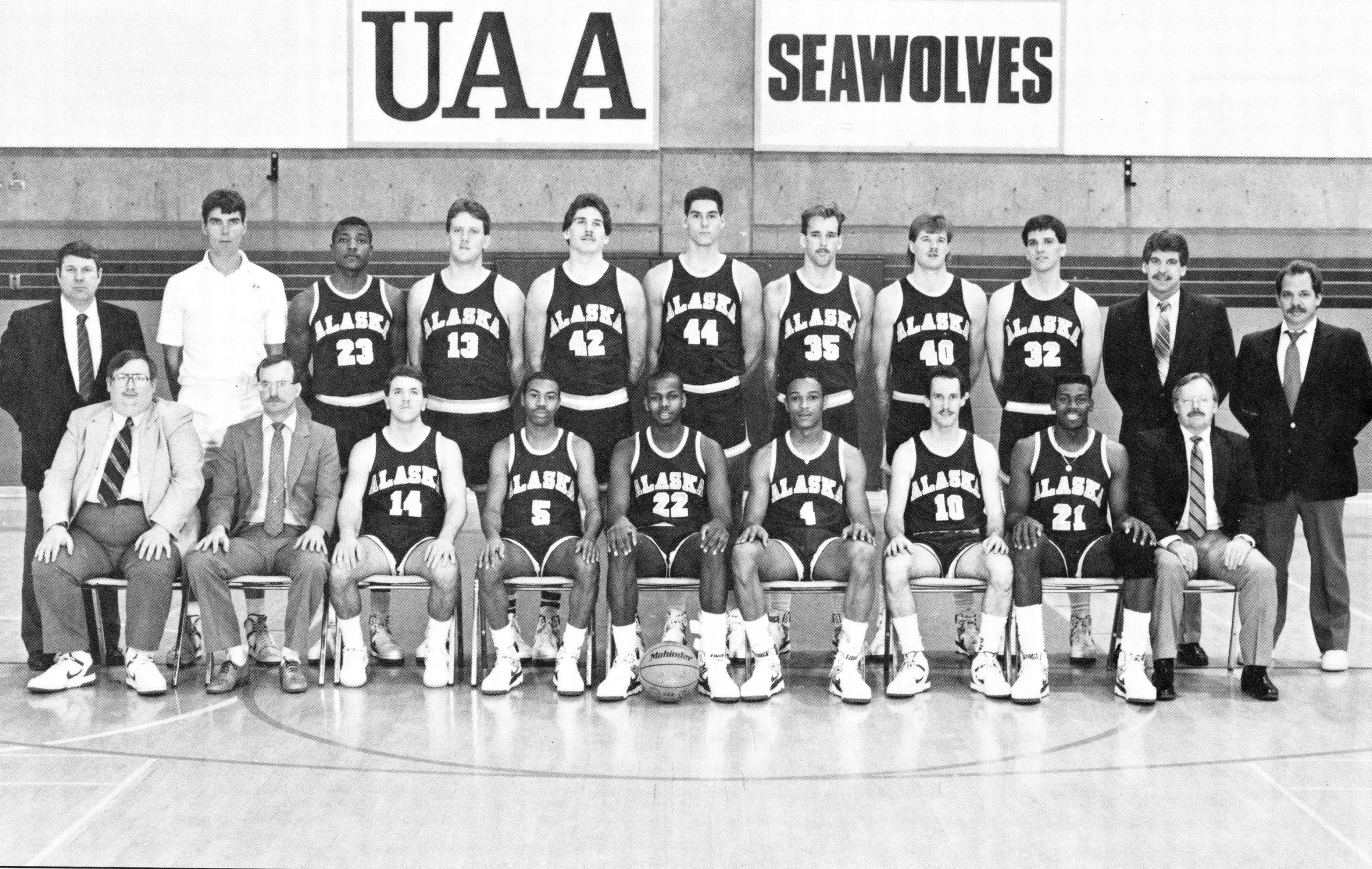 The Seawolves made history on a Wednesday.

Just four days before ringing in the new year, the UAA men’s basketball team put No. 2-ranked Michigan through the ringer at the Utah Classic.

The Seawolves executed their stall-ball strategy flawlessly and shot 63% from the floor to fuel a stunning 70-66 upset victory over the eventual NCAA champions in Salt Lake City.

No way a D2 team from Alaska beat the No. 2 team in the country. This was Michigan, after all; a Big Ten Conference power that started four future NBA players in Glen Rice, Terry Mills, Loy Vaught and Rumeal Robinson.

“I didn’t believe it would happen, but it happened,” Michigan coach Bill Frieder told the Associated Press after the game. 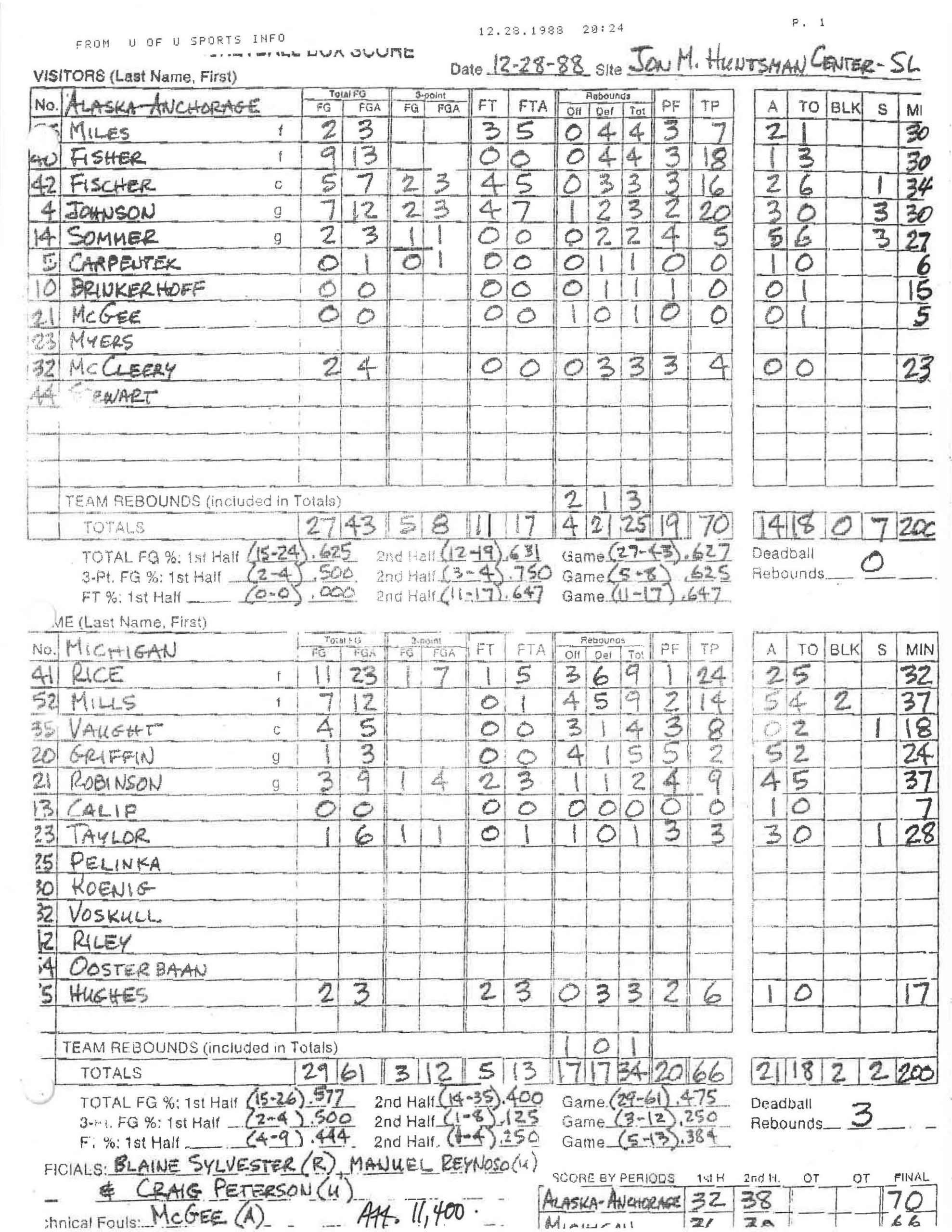 ESPN made UAA’s upset the lead story on SportsCenter that night, which helped the news spread like wildfire.

“I remember watching a video of the game and getting nervous at that time, thinking, I knew what the outcome was going to be, but you almost couldn’t fathom what just happened,” Tim McDiffett told the Alaska News Source in 2014, when the moment was inducted into the Alaska Sports Hall of Fame.

Michigan was 11-0 and beating opponents by 33 points a game going into the first round of the two-day Utah Classic. The Wolverines were coming off a 121-72 beating of Youngstown State.

Michigan’s run-and-fun offense averaged 100 points a game and ran teams off the floor, so UAA coach Ron Abegglen called for his players to slow it way down. He wanted to take the air out of the ball, milk the 45-second shot clock and drive the Wolverines crazy.

It worked as UAA trailed only 36-32 at halftime. 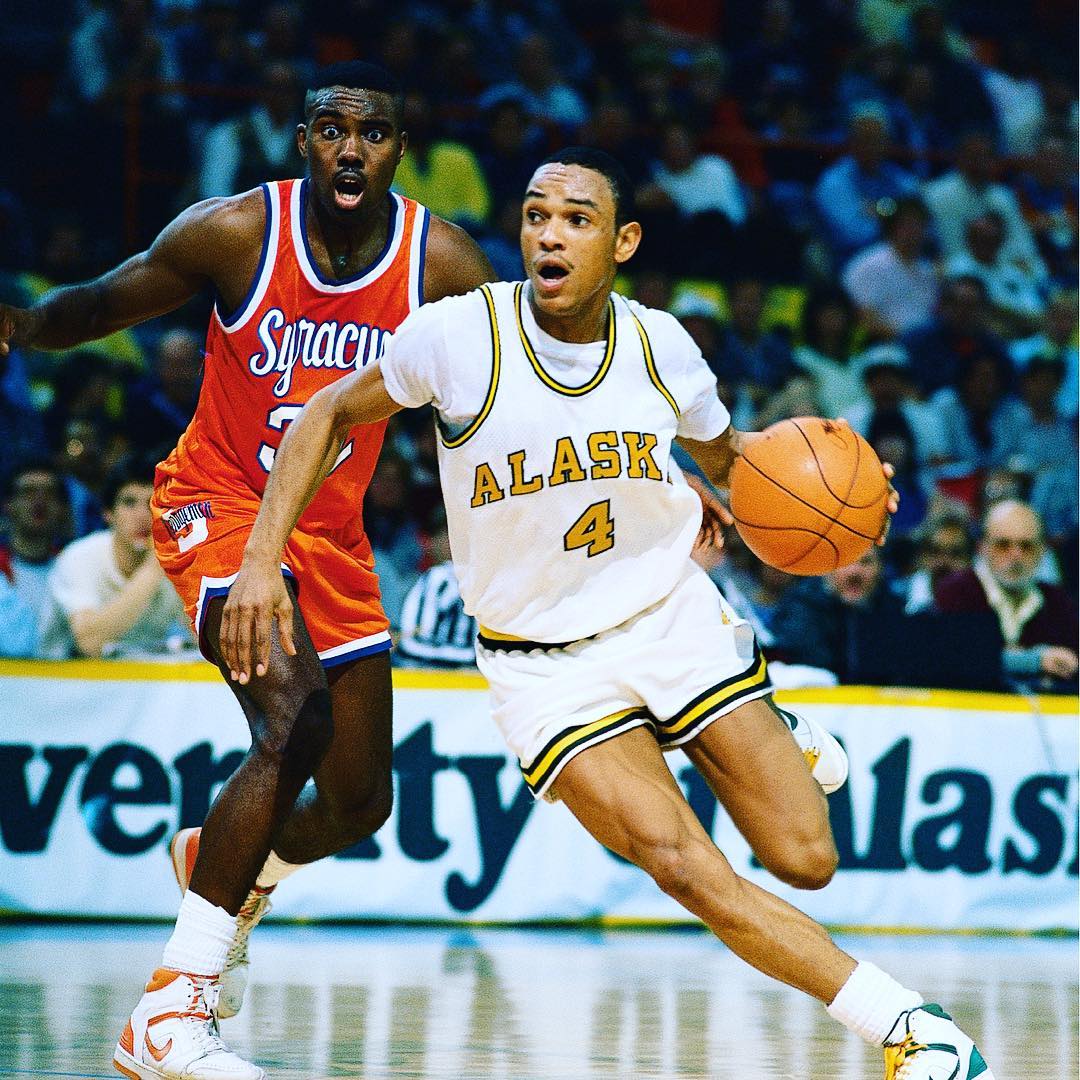 All-American Michael Johnson led UAA with 20 points in the win over Michigan. Photo from UAA Athletics.

But still, this was Michigan. Cinderella’s curfew was the second half, right? If so, nobody told the Seawolves.

You know it was UAA’s night when Rice – the Big Ten Player of the Year and an 83% free-throw shooter that season – missed three straight foul shots with Michigan trying to cut into a 63-60 deficit. The Seawolves didn’t flinch at crunch time, draining five straight free throws as the lead swelled to 68-60.

The next day in the tournament, UAA lost to Utah 75-68 in the title game while Michigan mauled Holy Cross 100-66 for third place.

The Seawolves went on to finish that season 21-9 and missed the postseason. Meanwhile, Michigan went on to win the NCAA championship with an 80-79 OT win over Seton Hall at the Kingdome in Seattle.

“Our team, and certainly the university, was rooting for Michigan because that was the team that we had beaten and they went on to win the national championship,” McDiffett said. “Then I think it started to become, ‘Wow, that was a huge victory’ and I think it meant more than at the time (of the upset).”

The victory over Michigan remains UAA’s crown jewel in the program’s treasure chest of upsets, surpassing Shootout wins over Missouri in 1985, Texas in 1986 and Wake Forest in 1993.

Not only was the Michigan win on a neutral court, but the Wolverines were ranked No. 2 in the country. None of those Shootout opponents were nationally ranked.

Still, outside of Alaska, it’s not considered the greatest upset in college basketball history.

That distinction belongs to Chaminade, a NAIA team from Hawaii that upset No. 1 Virginia and 7-foot-4 Ralph Sampson 77-72 in Honolulu in 1982.

40 years ago today, the biggest upset in the history of college basketball took place. Relive Chaminade's improbable win over No. 1 Virginia, thanks to the brilliant writing of Mike Lopresti. https://t.co/IGX5BLNbVE

Exactly one year earlier, on Dec. 28, 1987, the Seawolves took on another No. 2-ranked team in Kentucky when they traveled to Rupp Arena for the final stop on a three-game road trip, which started with back-to-back heartbreak defeats in Las Vegas – 85-84 to Creighton and 68-67 to Tennessee Tech. 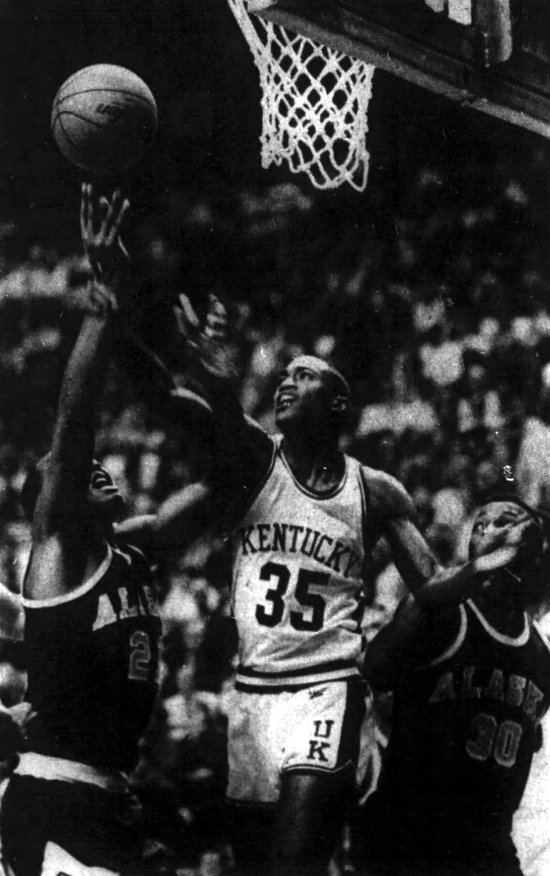 UAA went on to win 13 of its final 18 games, marching all the way to the 1989 NCAA Tournament title game.

The Seawolves earned a postseason berth by virtue of winning the Great Northwest Conference title and then dispatched Cal State Bakersfield (89-82, OT) and Cal State East Bay (72-67) in the West Regional. From there, UAA beat Ferris State 97-85 in the national quarterfinals before a standing-room only crowd of 3,400 at West High School. (I was there as a 15-year-old fan).

That win propelled the Seawolves to Springfield, Massachusetts, where they beat Troy 77-72 in the semifinals and then lost 75-72 to UMass-Lowell.