Winning culture that attracted Stephens to UAA now defines her 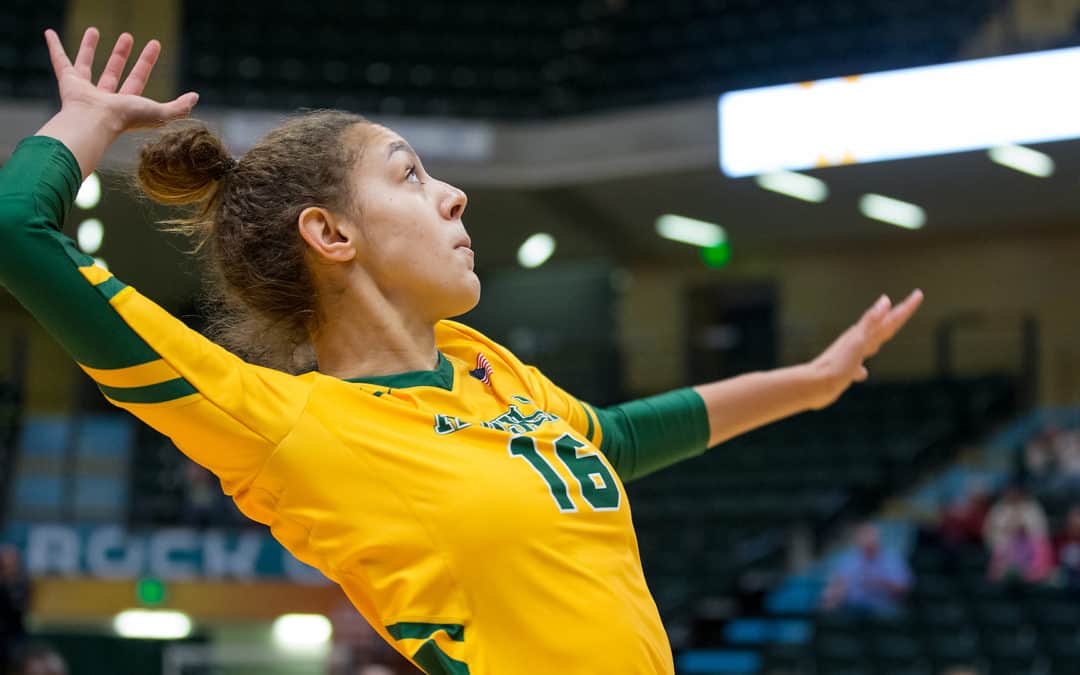 The youngest of nine children, Eve Stephens of Palmer was born to be competitive. Board games, sports, grades, it doesn’t matter. She wants to win. No matter what.

“We’ve broken bones playing football in the yard,” Stephens said with a laugh. “All in good fun.”

That win-at-all-costs mentality is what lured the former Colony High volleyball star to the University of Alaska Anchorage. The Seawolves have developed into one of country’s premier programs under coach Chris Green, who has posted winning records in all 13 of his seasons and playoff berths in nine of the past 11 NCAA D2 Tournaments.

In 2016, UAA advanced to the national title match. That was Stephens’ sophomore year of high school, and she followed the team closely.

“I was first attracted to UAA because of players like Morgan Hooe, Julia Mackey and Erin Braun,” Stephens said. “They have founded a winning culture based on hard work and grit.”

Hooe and Mackey were both All-Americans. Even better, as far as Stephens was concerned, they were from Alaska. They inspired her to come to UAA.

“I think being able to represent Alaska is awesome,” Stephens said.

The junior outside hitter is one of only two local players on this year’s 14-woman UAA squad. The other is freshman Reilly Plumhoff of Anchorage.

Stephens was an All-American as a sophomore and last season helped the Seawolves to an 11-4 record in the pandemic-shortened spring season with her 4.16 kills per set ranking third-best in UAA single-season history.

She also moved into the top 10 on the school’s all-time kills list, putting her on pace to challenge the school record that has stood since 1992. In the top ten, seven of the players are from Alaska: She looks to build on her total when the Seawolves open the season tomorrow in Hawaii.

The 6-foot-1 Stephens was selected GNAC Preseason Player of the Year and will begin this season in the top 10 in four different career categories at UAA – 10th in kills, third in kills per set (3.67), 10th in attacks (2,586) and seventh in attack percentage (.288).

UAA was picked No. 2 in the GNAC Preseason Coaches’ Poll, just behind defending league champion Western Washington. UAF was No. 4.

“Most Alaskans think the play (in the GNAC) isn’t as high as it really is,” Stephens said. “Going D2 might not be as inspiring as D1, but D2 is really competitive. The level of play has been increasing and I want people to know that D2 is still a great achievement. It’s something to look forward to and it’s always going to be competitive if you stay in Alaska or go out of state.

“Staying home is awesome because you’re close to your family and you always have the support of the community.”

Stephens grew up fighting for attention in a crowded house. Success was the best way to get noticed.

She wanted to have the best grades, the fastest time and the highest score.

She’s always been cutthroat when it comes to competition. She once broke her collar bone playing football in the yard. She still plays for keeps with board games.

“I am very competitive, especially during Monopoly,” she said. “If I don’t win, I might shed a tear.”

Stephens brings that same toughness and tenacity to the volleyball court.

The entire UAA team is built that way.

“We hold each other to such a high level of accountability where every pass, every set, every hit, we want it to be perfect,” Stephens said. “Of course, there are going to be mistakes, but we understand in order to rise as a team together we must hold ourselves accountable individually and hold the people next to us accountable.

“That’s what we do every day at practice. Practice is hard. It’s tough. Sometimes you don’t have a good practice and a few tears might come out every now and then, but we also understand that it comes from a level of support. It’s because we want the best from each other. Understanding that makes it a lot easier to come in every day and work hard.”